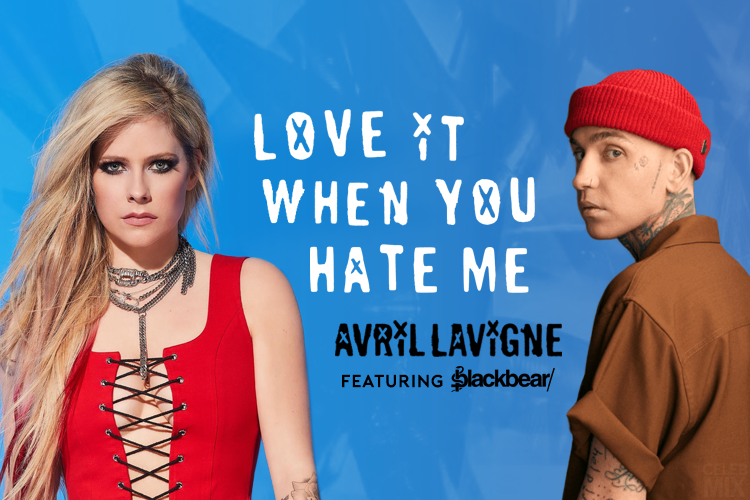 Embracing the highs and lows of love, Avril Lavigne has teamed up with blackbear for a catchy track titled ‘Love It When You Hate Me’. We have nothing but love for the pair’s explosive duet!

‘Love It When You Hate Me’ is a guitar-fuelled pop-punk anthem that perfectly describes the complex feelings of a love-hate relationship. Emotions aren’t always simple or straightforward.

Following the release of ‘Bite Me‘ last year, ‘Love It When You Hate Me’ is the second song to be lifted from Avril’s upcoming seventh album ‘Love Sux‘. It sure is shaping up to be a fantastic record.

Speaking to EW about her infectious new track with blackbear, Avril Lavigne said: “We went for a different approach musically and stylistically. I’m a huge blackbear fan, and so we had reached out to him. I actually have not met him yet. I sent him the song and he recorded his part and really took it to the next level. His lyrics are so genius. It’s actually really cool to write a song and send it to another artist and then he wrote his part and it was like summing up what I said but a different take on it and from a guy’s perspective. I just thought he was genius, lyrically.”

‘Love Sux’ will be released on the 25th February via Travis Barker’s label DTA Records. The highly-anticipated album, which will also feature collaborations with Machine Gun Kelly and Mark Hoppus, can pre-ordered here on Avril’s official website alongside exclusive merchandise bundles.

Over the years, Avril Lavigne has consistently showcased her exceptional abilities as a singer-songwriter. The Canadian superstar, who has sold more than 40 million albums worldwide, will be heading out on tour and playing various festivals this year so make sure you grab tickets if you can.

What do you think of ‘Love It When You Hate Me’ by Avril Lavigne and blackbear? Have you pre-ordered ‘Love Sux’? Let us know over on Twitter @CelebMix!