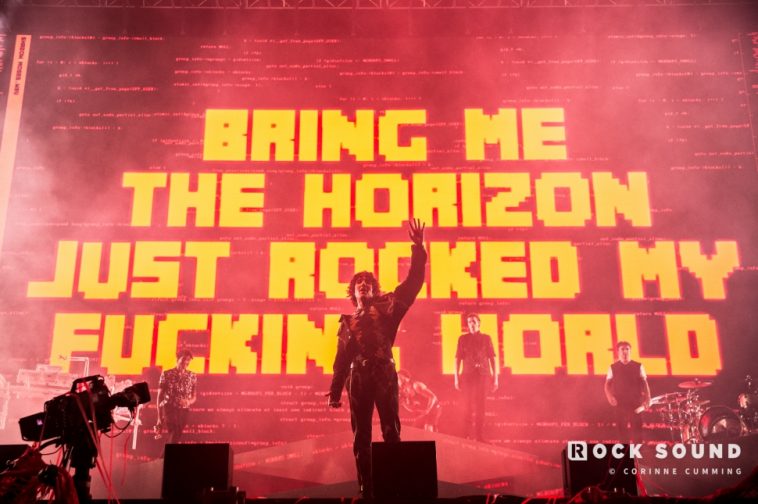 Reading Festival has long been shamed for shifting away from intense rock headliners, but this could not be more wrong after Bring Me The Horizon took to the stage at 8:20pm on Saturday August 27th.

It was a slot that was well overdue for the Sheffield rockers, who have had to consistently fight to prove their place within the rock and metal community since 2004. Being pioneers of experimentation within the British rock community, and doing so with little care to the lashings from rock fans, Bring Me The Horizon have navigated their way to being one of the most exciting acts within the scene. Each release brings something fresh to their discography, and their headline slot was the perfect amalgamation of their 18-year-long career.

Bring Me The Horizon brought all the energy they had been building up ready for arguably the biggest gig of their insane career thus far. Blasting through their hits Can You Feel My Heart, Happy Song and Teardrops, circle pits and walls of death prominent in every piece of the crowd, rock has not been more alive on the main stage in years, and this was only three songs in. Oli Sykes holds such a phenomenal control over the audience, albieit with much intense encouragement. “Push it back you f*****g pssys” is not something you’d get yelled by most other headliners, but it truly is not a BMTH show without being called a pssy by Sheffields finest rockstar.

While the intensity kept rippling through the setlist with b-sides such as Dear Diary, Kingslayer and the 2013 Bring Me The Horizon classic Shadow Moses, the band took moments to really bring the headlining slot to the intimacy felt at their arena shows. Heartfelt speeches about how this job and the fans that come with it truly saved Oli came before their future-emo bop DIE4U, acoustic singalongs to That’s The Spirit’s album track Follow You and moments as intimate as they get when Oli stormed through the crowd dishing out high-fives, hugs and forehead kisses. Showing genuine love and appreciation to the people who have elevated you to heights bigger than you could have ever dreamed, it is about as metal as it gets. Genuinely.

As the confetti fell down while the crowd and band alike moshed in unity to Throne, the happiness across everyone faces could only simply be described as a “they’ve made it” moment. It may have been the first, but it is certainly not the last time Bring Me The Horizon will headline Reading Festival.

For all the latest, make sure to follow CelebMix!