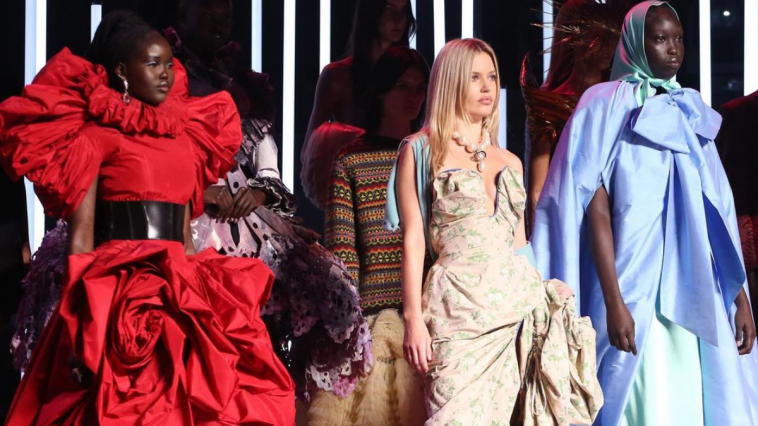 A star-studded guest list of fashion elites and a staggering number of talented nominees gathered in their glimmering and glorifying the award evening in their magnificent fashion ensembles—both custom-tailored and fresh off the runway—by international fashion houses, turning up the heat on the red carpet for the Fashion Awards 2022.

The Fashion Awards, hosted by Jodie Turner-Smith this year, is an annual ceremony aimed to bring the glamour and creative elites together to acknowledge and award those at the forefront of innovation and revolution over the past twelve months. Celebrities and designers such as Florence Pugh, Ashley Graham, Harris Reed, Pierpaolo Piccioli, and Emma Debicki were in attendance to celebrate creativity, innovation, design and all things sartorial elegance and ingenuity at Royal Albert Hall.

The British Fashion Council (BFC) inaugurated the ceremony on October 17, 1989, to honour some of the most steadfast and exceptional up-and-coming talents in the fashion industry, including creative directors, fashion designers, runway models, BFC Foundation Award winners, and independent British brands for their noteworthy contributions to the global fashion industry.

Not only that, but BFC also supports the future pipeline of creative talent by elevating British designers in the global fashion economy as a pioneer in ethically sound, creative businesses, while also empowering and energising them in the sector to contribute to the sector’s expansion and transformation into one with a bigger mission.

Lead award categories included Designer of the Year and Model of the Year, which were awarded to Pierpaolo Piccioli for Valentino and Bella Hadid, respectively. BFC’s Chief Executive Caroline Rush shared her joy in a press statement and congratulated all the winners and nominees of The Fashion Awards 2022.

“Each one of them contributes a remarkable amount towards creating an industry that promotes self-expression and individuality, perpetuates joy and optimism and pioneers in innovation and positive change. I look forward to celebrating the incredible work of our nominees, Leaders of Change, Award winners and the wider industry.”

The awards show celebrated a series of ‘New Wave’ creatives, which you can read more about here. And while you’re here, check out this year’s best-dressed celebrities on the red carpet of The British Fashion Awards 2022.

Without further ado, let’s dive right into the list of nominees and winners of the Fashion Awards 2022!

Designer of the Year

The leading award of the night recognises a British or international designer whose innovative collections have made a notable impact on the industry, defining the shape of global fashion. Check below the name of the winner and this year’s nominees:

This marked the second time Piccioli won the award. Actor Florence Pugh, decked out in a burgundy red backless Valentino gown with a massive train, presented the award to the renowned designer, who is synonymous with the Valentino ‘Pink PP’ shade of colour that has dominated red carpets and styling throughout 2022. “To me, fashion has a responsibility. I feel (I) have a voice and I want to use my voice even for anyone who doesn’t have a voice,” Pierpaolo told Reuters on the red carpet ahead of his win.

Model of the Year

The award recognises the global impact of a model who, over the last 12 months, has dominated the industry, with an influence that transcends the catwalk. Check below the name of the winner and this year’s nominees:

Unfortunately, Hadid couldn’t attend the event because of being sick. Stylist Carlos Nazario accepted the award from Ashley Graham on the behalf of the supermodel who shared a moving speech through a televised message paying tribute to her heritage.

The award recognises a British designer who, while running an independent business over the last 12 months, has had a momentous impact on the industry by optimising what creativity and innovation really mean. Check below the name of the winner and this year’s nominees:

Jefferson Hack bagged this year’s award for Special Recognition Award for Cultural Curation, which is one of the Special Recognition Awards that celebrates outstanding contributions to the fashion industry. Jefferson Hack is a curator, creative director, editor and co-founder of Dazed Media, with a portfolio that includes some of the world’s most influential media brands, including AnOther Magazine, Dazed, Dazed Beauty and NOWNESS as well as Dazed Studio. He is directly responsible not only for curating culture but for building bigger futures for so many people he crosses paths with.

Katie Grand took home this award at the Fashion Awards 2022 for her incredible contribution to culture, art, and fashion, which has made her one of the most exciting creative visionaries of contemporary times.

British luxury fashion house Burberry has won the inaugural award for Metaverse World and Gaming Experience at the Fashion Awards 2022, noting Burberry’s Blankos Block Party and Minecraft partnerships. British musician Kojey Radical presented the award stating, “a global panel of industry experts have determined that in 2022 a brand who showcased excellence in this space is Burberry.”

There weren’t other nominees for this category, and the brand received praise for its breakthrough innovation, contemporary outlook and experimentation within the Metaverse World in the past 12 months and for pushing the boundaries to showcase excellence in this space. Burberry collaborated with Mythical Games to launch its vinyl toy for the multiplayer video game Blankos Block Party in July 2021. Rod Manley, Burberry’s CMO, said the fashion brand is “excited to embark on this ground-breaking journey into the future of digital ownership in gaming.”

The Fashion Awards 2022 recognised fifteen “Leaders of Change,” which highlighted the fashion designers, brands and creatives who have made a positive change within the industry, through three core categories of Environment, People and Creativity, They hailed the next generation of fashion pioneers with the liked of Harris Reed, Priya Ahluwalia and Sinéad Burke for their efforts in up-levelling fashion and ingenious perceptions.

Earlier this year in September 2022, the former Queen of the United Kingdom, Queen Elizabeth II, passed away, leaving an enormous legacy behind her. The elite fashion houses and figures paid a heartfelt tribute to Queen Elizabeth II through a catwalk presentation titled ‘The Fashion Salute Show’, which saw models, including Lila Moss, swaggering down the red carpet that curled around the inside of the auditorium wearing British brands including Burberry, Alexander McQueen and Christopher Kane.

Get a glimpse inside the tribute which took place during the ceremony at Royal Albert Hall, introduced by Naomi Campbell and created in collaboration with Great Campaign, Charlotte Tilbury, Hair By Sam McKnight and Burberry.

The night’s host, Jodie Turner-Smith, stole the show by changing outfits throughout the night, as she donned four on-stage outfits, one more for the red carpet arrivals, and another yet for the after-party., becoming an ultimate feast for the awards show, spanning a lime green Gucci tulle gown and a cape-styled electric blue sequined dress.

Another 2022 hit trend spotted on the red carpet of the British Fashion Awards 2022 was nude dresses elegantly carried by many celebrities, including Rita Ora and Jourdan Dunn.

And finally, among the most talked about performers on stage during The Fashion Awards 2022 were Jessie Ware and Shygirl, whilst DJ Jodie Harsh and DJ Fat Tony led the afterparty. Jessie Ware performed a gorgeous rendition of her disco single “Free Yourself” on stage at the Royal Albert Hall.