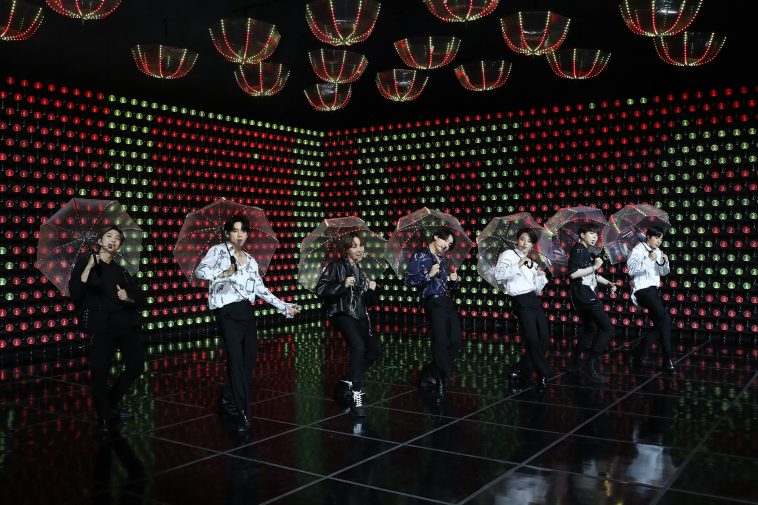 June 14th marked BTS’ first-ever live virtual concert ‘BANG BANG CON: The Live’, a celebration of their seven years together as a group. The virtual event surpassed 750,000 paid viewers, which to compare, equates to a 15 show run at a 50,000 capacity stadium and the biggest paid virtual concert ever.

Spanning across five different sets, the septet utilised each one for a unique ambience during the 100-minute concert. Beginning on the stage, Dope and Boyz With Fun kicked off with high energy, before slipping into their ‘studio room’ and embracing a cosier environment for fan favourites Just One Day and Like.

In an alternative universe, free from a global pandemic, BTS would have been wrapping up the US leg of their Map of the Soul: Tour, but that didn’t stop them from giving ARMYs a teaser of what they had prepared for it. Splitting into their album subunits, Jamais Vu (Jin, Jungkook and J-Hope) prepared a beautiful set filled with illustration and dark ambience. 90s hip-hop track Respect (RM and Suga) combined with a disco floor backdrop gifted fans with the retro performance they had been hoping for. Finally, Friends performed by Jimin and V was a nostalgic trip down the memory lane of their growing friendship. Additionally, the septet performed their pre-release single Black Swan, a disco remix version of their hit single Boy With Luv ft Halsey and quick snippets of UGH! and Zero O’Clock. Closing the concert were tour hits such as Anpanman, Go Go and their biggest hit in South Korea, Spring Day.

So what was your favourite Bang Bang Con performance? Let us know by tweeting the CelebMix account!