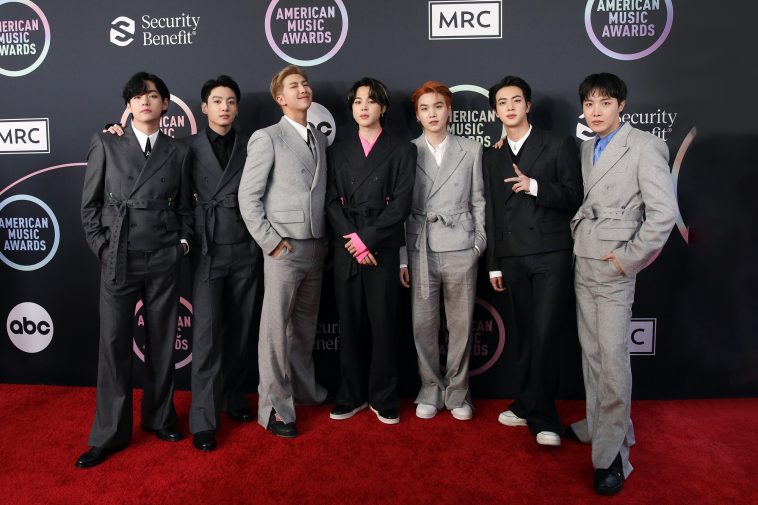 BTS are continuing to make history after becoming the first Asian artist to win Artist of the Year at the American Music Awards.

The global icons made their debut at the American Music Awards in 2017, where they performed their single DNA. Four years later, they scored a historic Artist of the Year win. The septet also won Best Pop Group/Duo and Best Pop Song for their Number 1 hit Butter.

Accepting the award, the seven members said: “It’s been an amazing ride, but nobody could have ever bet on the odds of us standing here and receiving this award. Seven boys from Korea, united by our love for music, met love and support from all around the world. We will never take this for granted…We believe that this is the beginning of our new chapter.”

Taking to the stage at the Microsoft Theatre in Los Angeles, BTS brought the house down with two performances. Giving the live debut of their Coldplay collaboration My Universe, and their award-winning single Butter, BTS were the talk of the night.

BTS are back in the United States ahead of their Permission to Dance On Stage – LA shows, where they have sold out the Sofi Stadium for four nights, amassing a sold-out capacity of 280,000. The shows will be their first in-person concert since 2019, where they wrapped up their Love Yourself: Speak Yourself World Tour.

2021 marks the first year that BTS have not released an EP or an album since their debut in 2013. With a year as successful as this, it is no surprise that people are wondering what will come next for them. With RM (Kim Namjoon) hinting on the AMAs red carpet that new music and a world tour is coming soon, it is safe to say that the wall for BTS has well and truly been broken down, and they will continue to keep their feet firmly placed at the top.