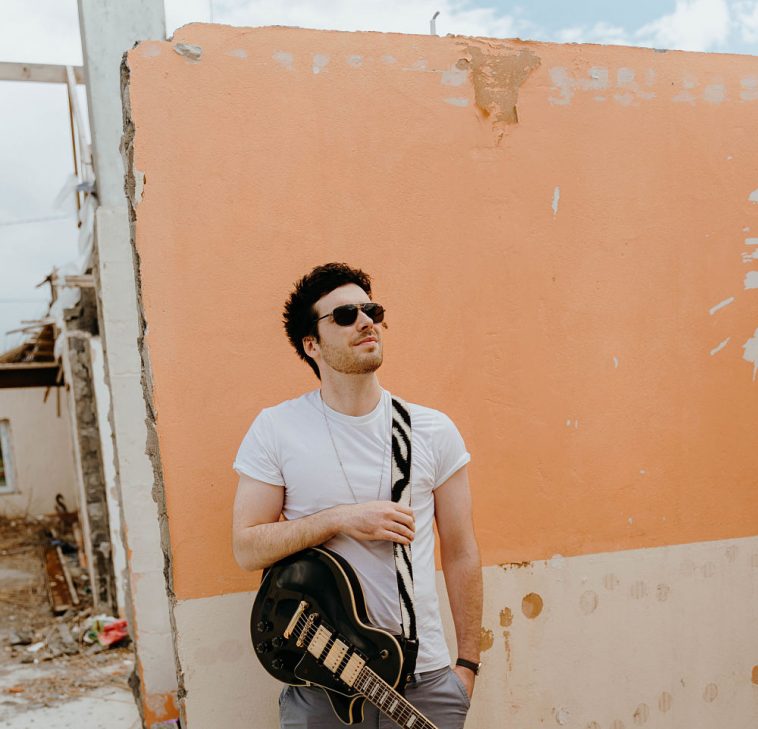 Johnny Bourke is an Irish musician. Johnny is the type of artist who finds it next to impossible to classify the type of music he make as it’s so heavily influenced by a wide range of genres.

“I think it’s somewhere in the middle of funk, nu-disco, pop, and even a bit of french house thrown in there for good measure,” Johnny tells CelebMix on his multi-faceted music. “I’m a guitarist first so I love the music of guys like John Mayer, Nile Rodgers, Cory Wong, but I’m also heavily influenced by more electronic vibes like Lenno, Oliver, and of course the very topical Daft Punk!”

I’m lucky to have been playing music professionally for quite some time before I ever started releasing music so what’s most important to me is that I make jams I’m proud of and will make people happy and want to dance.

“I love partying, travelling, and all those fun things we’re not allowed to do anymore so hopefully my tracks can instil a little bit of that longing into people,” Johnny Bourke continues.

Johnny Bourke is inconsolable about the state of things and the fact people can’t do anything but it would be naive to think that it’s not the same for everybody: “I’m very fortunate that I, my friends, and my family are all safe and we haven’t lost anyone to covid like so many others,” Johnny expresses. “I try to focus on that and just immerse myself in the studio while we all wait out the storm!”

“It was a very fast and scary thought that perhaps a relationship can be a lot more than you take for granted,” Johnny tells CelebMix about the creation of his newest single. “Think about all the opportunities and things that came as a direct result of your significant other, they affect your life in so many ways and sometimes you don’t even realise it and just assume it was by your own hand.”

Johnny wanted to keep it straight and to the point with this song, a duet about two people who would do anything for each other and what that means to both of them.

The particular inspiration for this song at the time and stimulus that set Johnny’s brain off thinking has mitigated, but he stands by the message and everything that the song portrays. It’s a very simple tune and Johnny made it so very consciously. In fact, Johnny is proud of this song and the fact that it’s so easy to sing-a-long to just makes it even better.

The chord progression came to Johnny first [during the creative process], just an 8-bar loop. Johnny then laid it down on a Juno and literally the first thing he hummed was the hook “I’ll only ever be someone…” .

“I put down a really quick drum loop and within 30 minutes I had what would be the final lyrics of the song written,” Johnny explains on the creative process. “I spent some time developing it and writing more but as I said I went back and stripped it right back keeping it really concise and to the point.”

I then produced the song up to its pretty much final version, recorded my own vocals, did a quick dirty mix, sent it to Saige, and asked if she would be interested in singing the second verse onwards with me.

Johnny continues on the creative process, “I was delighted she was keen but again covid halted us so it sat for a few months over lockdown. Eventually we met over Christmas and tracked her. I did some extra ear candy elements that had occurred to me while I had let it sit and did a final mix in the first week of January and now here we are!”

Johnny’s life definitely influenced the initial idea and it was an explicit incident that made the thought occur to him. The lyric matter was in Johnny’s head for quite a while before he started writing this song. It was only while he was jamming over the synth progression that the hook appeared in Johnny’s head and the rest of the song just flowed from there. Clearly Johnny had been subconsciously writing this song when he wasn’t even aware of it because it simply came too easily and quickly.

“I wish that was the case all of the time,” Johnny adds. “This was a VERY rare occurrence of a song not making me wanting to cry obsessing over the tiny details. Everything just fit and it was very refreshing and enjoyable to work on.”

“Mostly and irresolutely I just want people to want to move to it,” Johnny says on what he wants listeners to take away from his song. “It’s the main reason I’m so into disco and funk music. You hear it and you instantly want to dance.”

Johnny loves that aforementioned feeling and it makes him so happy to think that that sort of wizardry is possible with some drums, a bass line, and a guitar. Combining classic funk and disco sounds with modern elements is something Johnny finds so satisfying.

“When you can anchor the inherent feel of groups like Earth, Wind, and Fire, Chic, Stevie Wonder, etc. and lay them down with snappy, hard-hitting drum lines and crisp mixes you really create something special,” Johnny continues in our chat. “I want this song to remind people that sometimes being happy and wanting to dance is all you need to take from a song to enjoy it. Don’t overthink music or love, just embrace them!”

Lots of more music to come from Johnny Bourne in 2021, and the best thing about lockdown is that he has been in the studio constantly and really found himself a groove and workflow that optimises his productivity.

“I’ve never enjoyed making music more and I’ve never been so happy with what I’m making,” Johnny expresses. “There will be lots of bangers approaching in 2021.”

Johnny of course wants to get back touring and doing shows as that truly is the main reason he makes music – so he can perform it, but for now he can be patient.

“I’m just banking up as much quality material as I can to ensure that I’ll put on live shows that people will never forget,” Johnny concludes in our chat.