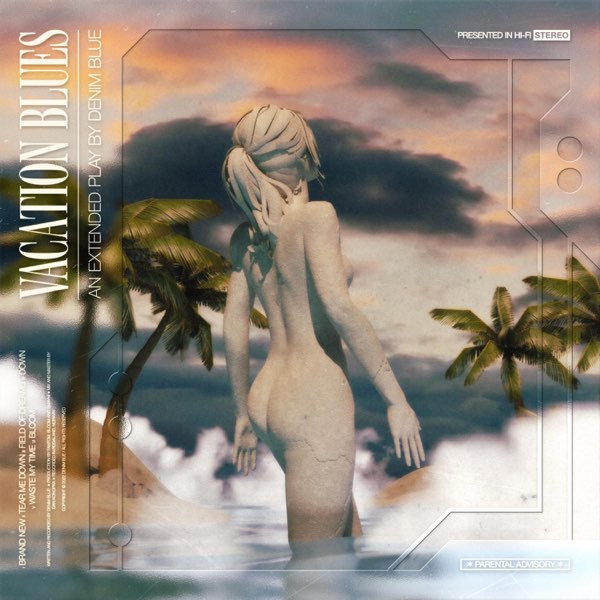 Well if there was an EP title that explains exactly how we’re all currently feeling, it’s this one – “Vacation Blues” by Denim Blue, and what an EP it is too! This follows up his third single taken from this EP titled “Tear Me Down”.

Denim Blue, real name Jens Bjarne, is a Norweigan singer-songwriter and indie rapper who is making a mark on the industry with this project. He has released music under a variety of different names over the years and for this hip-hop project he has drawn inspiration from legends in the rap world including Dr Dre, Eminem, Snoop Dogg, and Lil Wayne. 2021 saw him drop his debut album, titled Blue World, which delved into dark and conceptual energy, and in turn has allowed him to be more experimental when it came to this EP, “Vacation Blues”, which contains a total of six tracks.

All six tracks were written by Jens Bjarne himself, according to Spotify. “Brand New” kickstarts the EP off brilliantly, with Denim Blue showcasing his gravelly but iconic voice that is filled with passion and integrity. His voice contrasts perfectly with the upbeat jangle-pop melodies, and adds a surprising rap verse towards the second half of the track, easily standing out and making his mark, effortlessly opening up and allowing the listener to understand the theme of this EP, who Denim Blue is, and what this project is all about. He follows this track up with the tranquil art-pop track “Tear Me Down” which has a Måneskin-inspired vibe going on, with relatable lyrics and emotional vocal runs set to give chills to the listeners.

Track three, “Field of Dreams”, follows next starting off with relaxing acoustic guitar chords before Denim Blue shocks us with hard-hitting rock vocals, giving a twisty but empowering overall feel. “Down” is the fourth track, and it’s another theme we don’t expect as we hear hazy synth-pop beats with an emotional vocal all wrapped in a ballad-like conception with slow-rap verses. Track five, “Waste My Time”, paints a colourful image with the backing track and subtle-anger lyrics that are filled with harmonies and soul. Denim Blue ends the EP with the track “Bloom”, creating a rhythmically addicting sound that works perfectly with his emotional rap verses and the soulful chorus, easily making sure that the listener doesn’t forget about the journey that “Vacation Blues” has taken them on. Overall, “Vacation Blues” is twisty, unexpected, yet phenomenal – Denim Blue easily shines showing off his raw talent; not many singers can dip into a variety of genres and pull it off so incredibly, his versatility is off the charts, but to also combine these multiple genres and give a solid EP which is truly unforgettable easily makes Denim Blue one to watch.

Talking about the EP, Denim Blue said: “’Vacation Blues’ is a short but open story. There are a few ways to interpret it as it grows darker with different stages of losing hope, love, will and identity. At the end of the EP, there’s a realisation, but it’s a cyclical story; the first and last tracks have the same vocal hook with different meanings. It is about struggling to move on, whether from heartbreak, addiction, mental health, or any other personal matter; it is up to you to decide, as the listener. I wanted it to feel familiar, almost like the inner voice that tries to speak up.”

“Vacation Blues” by Denim Blue is available to download and stream right now, on all platforms.

Let us know what you make of “Vacation Blues” by Denim Blue on Twitter @CelebMix.