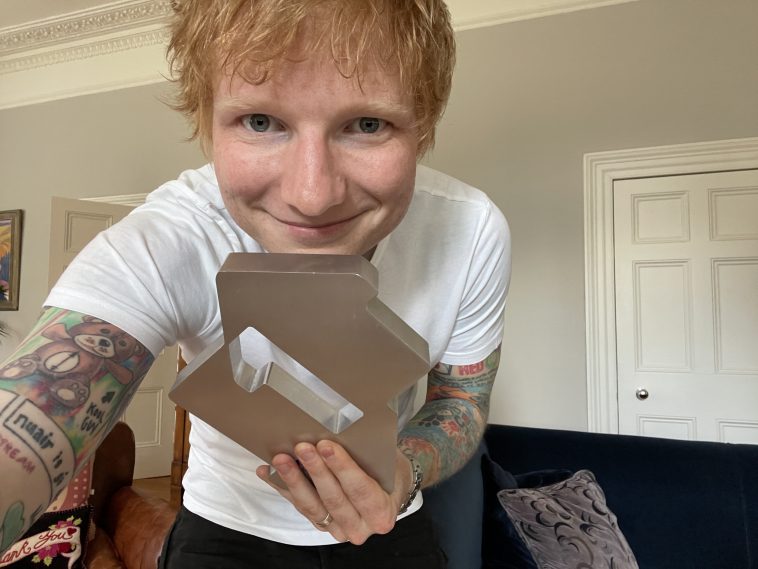 Global superstar Ed Sheeran has debuted at number one in the UK Singles Chart with his latest release, ‘Bad Habits’.

The track scored 92,000 chart sales during the week, including 8.7 million streams, to claim the number one spot. In doing so, Ed has become the first British artist to go straight to number one in the UK this year.

Marking the singer-songwriter’s 10th chart topper in the UK, Ed now joins an elite group of just nine artists including The Beatles, Elvis Presley and Take That who have achieved this incredible feat. His previous number ones include ‘Sing’, ‘Thinking Out Loud’, ‘Shape Of You’, ‘I Don’t Care’ with Justin Bieber and ‘Beautiful People’ with Khalid.

Sharing his delight, Ed told OfficialCharts.com: “I want to say thank you so much to everyone that made this happen. I’ve been away for such a long time and I really, really don’t take this for granted, this is an amazing thing. Thank you for making me feel the love. Hopefully next week it will be knocked off the Number 1 spot by 3 Lions because we’re going to win the Euros. It’s coming home!”

To coincide with the release of ‘Bad Habits’, last Friday Ed teamed up with TikTok for their UEFA EURO 2020 show and delivered an immersive live performance from Ipswich Town’s Portman Road. The performance racked up over 5.5 million views across the broadcast, making it the most-viewed artist performance in TikTok history.

Ed has also released a behind-the-scenes video from the making of ‘Bad Habits’ which you can check out below.

Ed is currently working on his new album, which will be follow up to his 2019 release No.6 Collaborations Project.

Are you enjoying ‘Bad Habits’ as much as we are? Let us know your thoughts on Ed Sheeran and his new music on Twitter @CelebMix