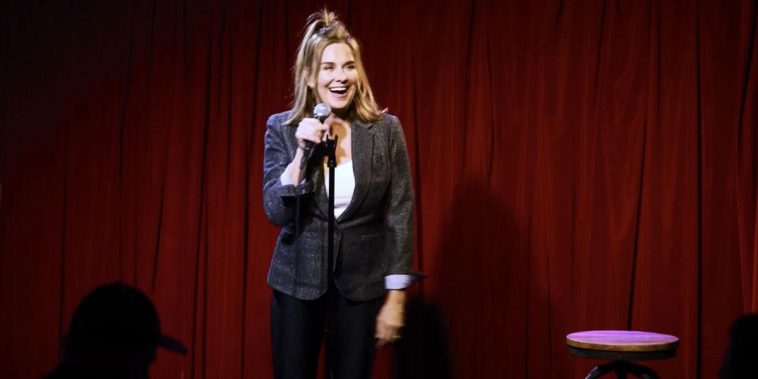 In a world where grief exists everywhere, who wouldn’t love to laugh? Well, this is why comedians are so famous around the globe. They provide stress relief and make people happy with their creativity. But while we celebrate our love for comedians, it is also important to realize that making people laugh isn’t as easy as it may seem. You have to create unique content, be confident, and present a personality that the audience can’t help but get attracted to.

There was a time when male comedians would steal the show with their quirky sense of humor, but times have changed, and female comedians are killing it right now, hitting everyone right in the funny bone. Among such women making it big is Sarah Halstead, a renowned comedian who has proved her versatility as a TV actress as well.

Sarah Halstead was born in Flint, Michigan, and went on to study drama at NYU’s Tisch. She loved the limelight from a young age, and hence she was confident enough to perform in front of an audience. Amongst her many achievements is her stint in the off-Broadway play called ‘A Lullaby for Murder in NYC’. Moreover, she has starred in TV shows such as ‘Deadly Sins’, ‘Blood Relatives’, ‘Cry Wolfe’, ‘I Am The Night’, ‘Betrayed’, and several others.

She even created, wrote, and starred in her own short film ‘Meet the Roommate’, along with producing and writing a one-hour stand-up special ‘RVs and Cats’ that was streamed on Amazon Prime. Other plays under her belt include ‘Legends of Champagne at Charleston Wine’, and ‘Hairspray’ – the play at the iconic Orpheum Theatre in Los Angeles.

We are not done yet! Her list of achievements doesn’t end here since she went on to star in over 100 commercials and co-created and co-hosted a live show and podcast with Darrell Hammond from Saturday Night Live called ‘The Summit’. The point we are trying to emphasize is that this multitalented artist has come a long way since she started off, and in fact, has many plans for the future.

Just like other successful individuals who went through certain challenges to make it big, Sarah Halstead also had her share of struggles. According to her, the acting industry is very competitive, and she was rejected several times before carving a niche for herself. “I have developed a tough skin and handle rejection very well,” she said. “The only thing that would make me quit is death, and even then, I will come back and my ghost will live at the Hollywood sign!” Sarah threw in some humor.

Apart from experiencing rejection, she was also shamed for her looks. She was often told she’s not pretty or skinny enough. “Some even said that I am too pretty, too blonde, and too American,” she shared. “But I have never been told that I am not good,” Sarah added. While many people generally venture into acting, she wanted to do something different and hence tried her hand at comedy as well.

When asked what inspired her to be a comedian, she revealed that her love for comedy arose when she started watching Saturday Night live at the age of 10. She is also a big fan of Lucille Ball, Joan Rivers, and Mom’s Mabley. “I loved all the trail-blazing female comedians that did not have the same advantages because of their gender,” she exclaimed.

Though acting came into Sarah’s life first, she pursued her obsession with stand-up comedy by pushing through and never giving up. But no matter the circumstances she encountered, this dynamic star kept on fighting. “I am very spiritual and believe in the Law of Attraction,” she explained. “You can achieve anything if you operate on a high frequency of vibration and ask the Law for your specific needs.”

As far as motivation is concerned, Sarah Halstead believes her passion keeps her fueled and inspired. She also advises her fans and followers to connect with themselves spiritually so that they can positively pursue their goals and dreams.

Are you planning to pursue a future in acting or, even better, become a stand-up comedian? If yes, follow Sarah Halstead’s lead and break the barriers. “The best tip I could offer to those who have the passion for acting and comedy is, don’t quit,” she reiterates. “If you are passionate about something, you will develop the skill. Talent is overrated. The only thing that will make you great is practice,” Sarah Halstead concludes.