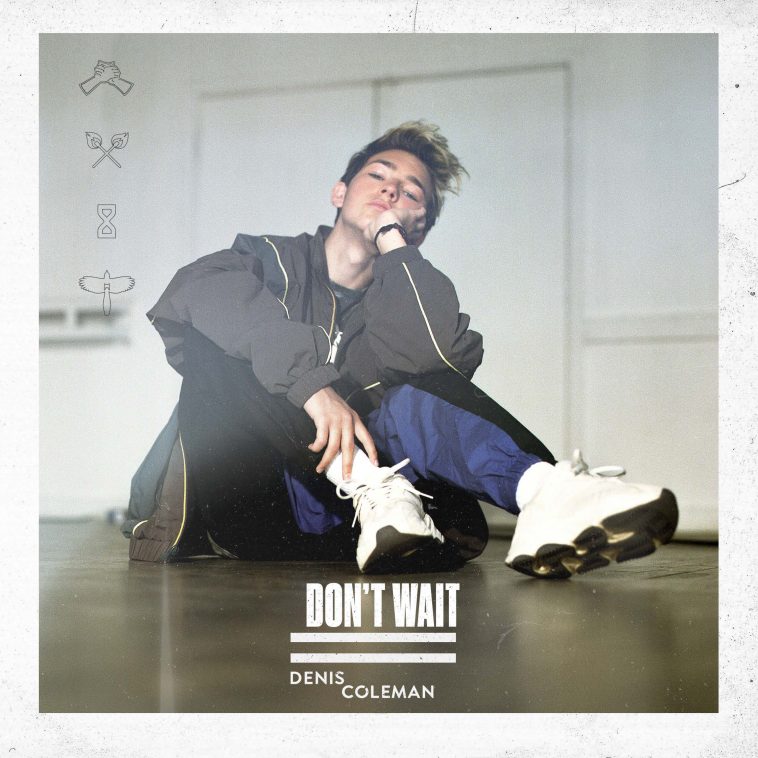 Last year Denis Coleman was someone “no-one in the entire universe knew”.

Those were his own words. Speaking to CelebMix backstage before supporting New Hope Club, the American pop star couldn’t believe the year he was having. Just months before the youngster had been thrust onto the country’s biggest arenas as an unknown to warm up crowds for The Vamps.

Since then, Denis Coleman’s stratospheric rise has shown no signs of stopping – the 17-year-old now counts over 300,000 monthly listeners. The majority of those fans are Generation Z pop connoisseurs with a beady-eye for fresh talent.

On Don’t Wait, Coleman’s debut EP which drops today, the singer muses on what life is like for his generation in a year as bizarre as 2020. The four-track effort journeys through the trials and tribulations of taking friendships online to struggles with self-motivation and finding inspiration in nostalgia.

“It’s the first time I’ve put out a real body of work and it represents my headspace right now,” Denis tells CelebMix on the landmark day.

“I hope fans just really immerse themselves in it. It’s a natural progression throughout the EP, it’s really telling a story sonically. It can be a little bit more empowering, a little more deep and meaningful.”

The high-tempo electropop of hits like ‘Imperfect’ and ‘All I Wanna Know’ which put Denis Coleman on the map are dropped for more introspective lyrics and an 80s inspired synth-led production that has become so trendy this year.

“The 80s rhythm seems to be gaining prominence. I wanted to contrast that vintage flavour with a whole sonic landscape that was more hip-hop influenced with elements from people like The Weeknd. What you get is a hint of that 80s flavour and a somewhat urban flavouring embedded in there as well.”

As still a relative newcomer to the pop world, Denis isn’t afraid to pay homage to the tastemakers also playing with 80s sounds he has on repeat.

“The Weeknd is one of my favourite artists of all time. Dua Lipa [who released 80s laden Future Nostalgia in 2020] of course is an incredible artist. She has the voice, the image, the dance, the songs – she’s an incredible powerhouse at the current time. I love their duality of a current sound but also a little bit of nostalgia creeping in.”

Whilst inspired by those award-winning names, the singer has still managed to find his own sound. The Don’t Wait journey started in May with ‘Make Friends’, a track born from the early months of lockdown as Coleman saw his friendships move online.

“I found I was talking and messaging with my friends online but I wasn’t feeling that good. I’ve done some research since then and there’s this phenomenon where online interactions can be damaging to our mental health. I was a little confused with what was going on in the world and ‘Make Friends’ was the right way to transition into the new sound and world we live in.”

Kicking off the new era with the track soon proved the right decision as platinum-certified producer R3HAB took no time to jump on the flick with a club-ready remix. Viral success and playlisting left, right and centre across platforms saw revamped song hit new heights for Coleman. It’s already become his most streamed track to date, nearing the 2 million mark. And it all happened thanks to the 17-year-old’s ‘never say never’ attitude.

“R3HAB is one of my favourite artists. When the track came out I thought just as a hail Mary, let’s send him and see what happens,” he laughs. “When he came back saying that he really liked the song and wanted to do a remix my mind exploded and I did a happy jump around.”

Spurred on, the ‘Soft Spot’ singer carried on writing about the lockdown life he was living. On October single ‘Don’t Wait’ Coleman tackles procrastination. In a year which has seen the youngster write and release his most impressive music to date, it’s hard to believe a lack of productivity is something he may suffer from, but he assures he is just human too.

“It has been tricky at times. Everyone is feeling it right now and it can be difficult to be motivated when you’re stuck in the same place every day and nothing is changing, when in reality everything is changing every day.”

“The song isn’t just about moving past self-doubt but also addressing that there is something attractive in having a moment to procrastinate – whether that’s watching new stories on Instagram, putting off a project or finishing your Netflix show.’

Now that Don’t Wait is released in full, the singer is more desperate than ever to get back on the road. Having announced his biggest headline tour to date last February, set to take place in September, postponement to February 2021 and now to whenever logistically possible is a hard bullet to bite.

“As soon as I can get back on that stage, it’s going to be a really special experience. It’s such a key part of why I do this, it’s what I love and what inspires me.”

Optimistically still on the calendar for April 2021 is the HRVY U.K. and Europe tour. They might not be those headline shows that Coleman has worked so hard to earn, but being back on a support gig alongside the ‘Personal’ singer, a good friend who Denis has been proud of on Strictly Come Dancing, leaves him “really excited”.

“He’s the nicest person I’ve ever met and is incredibly talented. It’ll be a great time, he always puts on an incredible performance so it’s going to be amazing.”

“All the support sets have been instrumental in building fans. I’ve met so many people and had an incredible time with them. That has definitely played a huge part in where I am now and my identity as an artist.”

Just as much as the singer, pop fans will have their fingers crossed that the youngster’s live sets make a return soon. Armed with the Don’t Wait EP, his best music to date, it’s surely only a matter of time until Denis Coleman is headlining the biggest of arenas himself.

Are you a Denis Coleman fan? What’s your favourite track from the EP? Let us know @CelebMix on Twitter.