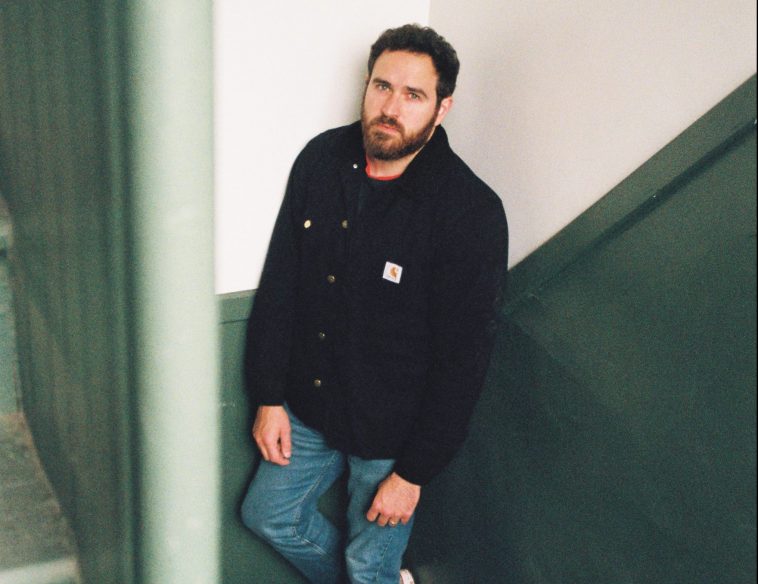 Looking back on life and love is Stephen Babcock with his second studio album, “When We Were Kids Ourselves” which is set to be released on November 10th but we have the exclusive premiere, a day early. You can check out all 10 tracks below. The album delves in deeply about his past with someone he fell for as well as his friends’ love and loss, and it’s all twisted around an indie-pop-folk sound. This follows up “All I Can Do” which was the seventh single release from this sophomore LP.

Stephen Babcock is a singer-songwriter from Buffalo, NY who has been fan-named as the “Internet Dad” due to his relatability to many during the pandemic’s lockdown. He was born into a musical family of four kids (alongside a twin brother) and started songwriting when he was 13, following in the footsteps of his father and his older brother. For the past five years, he has been touring and opening shows for the likes of Ed Sheeran, Izaak Opatz, Canyon City, William Hinson, and Girl Blue. Last year saw him release his debut studio album, “Monroe”, and he has followed that up with a bunch of singles in anticipation of his 2022 sophomore album, “When We Were Kids Ourselves”.

Production for the album comes from instrumentalist and musician William Hinson, with Stephen Babcock writing every song. The 10-track album takes the listener on a relatable journey as Stephen Babcock reflects on the past. His sweet vocals are wrapped around harmonies and guitar arrangements, creating catchy and captivating tracks.

Watch Stephen Babcock talk about each track on the album here:

Talking about the album, Stephen Babcock said: “This album is about the journey and growth experiences post ‘growing up’. It’s so easy to feel isolated when you’re taking on something challenging in life, and we tend to normalize the idea that in adult life, we’re supposed to have it all figured out by now. I hope my music serves as a bastion for people experiencing challenging emotions, and I hope my voice can help those struggling to find the words they’re looking for in their own life.”

Since each track on “When We Were Kids Ourselves” has its own spotlight on the album, allowing listeners to relate to different ones or all of them, we decided that the best way to represent this album would be to write up a track-by-track album review.

The first track on the album is “Worst Ways”, which was the first single that he dropped from this album, back in February. A tuneful guitar chord starts the song and continues throughout, being added by Stephen Babcock’s incredible vocals that are full of storytelling vibes as his lyrics delve deep into getting over someone and how difficult doing so can be. As the song goes on, gorgeous harmonies are added, creating an unforgettable chorus that just speaks to every listener.

Still Think of You

Hitting on themes of seeing people from your past on social media and remembering times you spent together – something we have all done, Stephen Babcock uses his clear crisp vocals to give us chills. The upbeat folk backing track can be heard behind with a prominent guitar arrangement that fluctuates throughout, adding to the vibe and the energy of the track.

If you’ve listened to Stephen Babcock talk about each of the tracks in the video above, you’ll know that “Internet Friends” is a song he wrote for a friend who dated an Instagram influencer where their relationship broke down as she cared more about her followers than being in the relationship. The strong guitar chords add to Stephen Babcock’s folk-toned vocals that hit hard during the chorus which is just so powerful. We also get a guitar instrumental towards the end of the song, turning the track into a strong and powerful statement.

Switching up the album, “I Just Can’t” is a pure pop song and shows off Stephen Babcock’s versatility creating addicting melodies and upbeat lyrics. Falling for someone and that buzz you get is exactly the vibe that this singer-songwriter has captured for this track, with lyrics we can all relate to. The explosion of guitar rhythms is full-on but in the best light, accompanying the heart-felt vocals and creating a track that is destined to be stuck in your head.

“Meant For Me” was written for another friend of Stephen Babcock’s about the end of a relationship and wondering if their ex is their “one” and if they are meant to be together. We all question these things at the end of a relationship, and this singer-songwriter has used all this emotion and storytelling and created this awesome sweet song. This track is much more mellow than the previous track, which makes it stand out even more, allowing Stephen Babcock’s vocals to shine throughout.

Falling in love can be both a good thing and a bad thing, and when we’re on that cusp of falling in love we can have an internal battle with ourselves as we don’t want to get hurt again. With this song, “Battle”, Stephen Babcock wants us all to let go and succumb to love and admit to ourselves that it is a good thing, it always is in that moment. The folk guitar is prominent throughout and really emphasises his voice making it clear and crisp. The hook is one we’ll be singing for the rest of the day, as this singer-songwriter spreads positivity and joy with this track.

All I Can Do

Admitting to one’s faults is never easy, and we’re all trying to improve ourselves and be the better version of ourselves, and this is where “All I Can Do” comes from and not apologising for not being perfect, as Stephen Babcock states in the above video about the track. It’s rhythmically chilled with a groovy chorus that has the repeated line “All that I can do is love you”, which really makes a statement and a half about love. Stephen Babcock easily taps into emotions of love making the track come off as a cute serenade of a song.

The first of the new tracks, “January 3rd” delves deeper into his folk sound as he sings about realising that not everything is his fault in a relationship and that there are two sides to every story. In the video above, he mentions an important thing about this track, that you need to let go of the guilt you may feel when in a relationship. The lyrics are impactful, with the chorus hitting us in the heart, whilst the verses elaborate the story of the track. It’s a poignant song that we can all relate to in some way or another.

Described as the complete opposite of “I Just Can’t” whilst wrapped up in an upbeat pop song, “Heart Off” is about the end of a relationship and wanting to let go of everything right at the end. Stephen Babcock repeatedly asks “how can I turn my heart off from loving you?”, and isn’t that one of the age-old questions that there’s no simple answer to? Highly relatable and easily addicting, “Heart Off” has to be one of our favourite tracks from the album as the backing track melds well with Stephen Babcock’s voice, and there’s also an awesome guitar instrumental that is bound to draw listeners in.

“The Diner” is the final track on this album, and Stephen Babcock describes it as a prequel to one of his previous tracks that he dropped last year, titled “Bowery”. This incredible singer-songwriter transports listeners into a diner in New York City, delving deep into his storytelling lyrics, as we become spectators of a relationship ending just on the next booth. The slow guitar chords and dreamy theme add to the night-time American diner feel.

Listen to “When We Were Kids Ourselves here:

Overall, this album is an amalgamation of indie-pop and folk, creating an awesome, empathetic sound that coalesces beautifully with Stephen Babcock’s refreshing vocals and emotional lyrics taking the listener through stories we can all relate to. “When We Were Kids Ourselves” really is a reflection on life and love, this “Internet Dad” really manages to spread positive energy to all his listeners, with this album making you realise that you are not alone, that others have been where you are, and you can get through it.

“When We Were Kids Ourselves”, the sophomore album by Stephen Babcock, will be available to download and stream on November 10th.

Let us know what you make of “When We Were Kids Ourselves” by Stephen Babcock on Twitter @CelebMix.