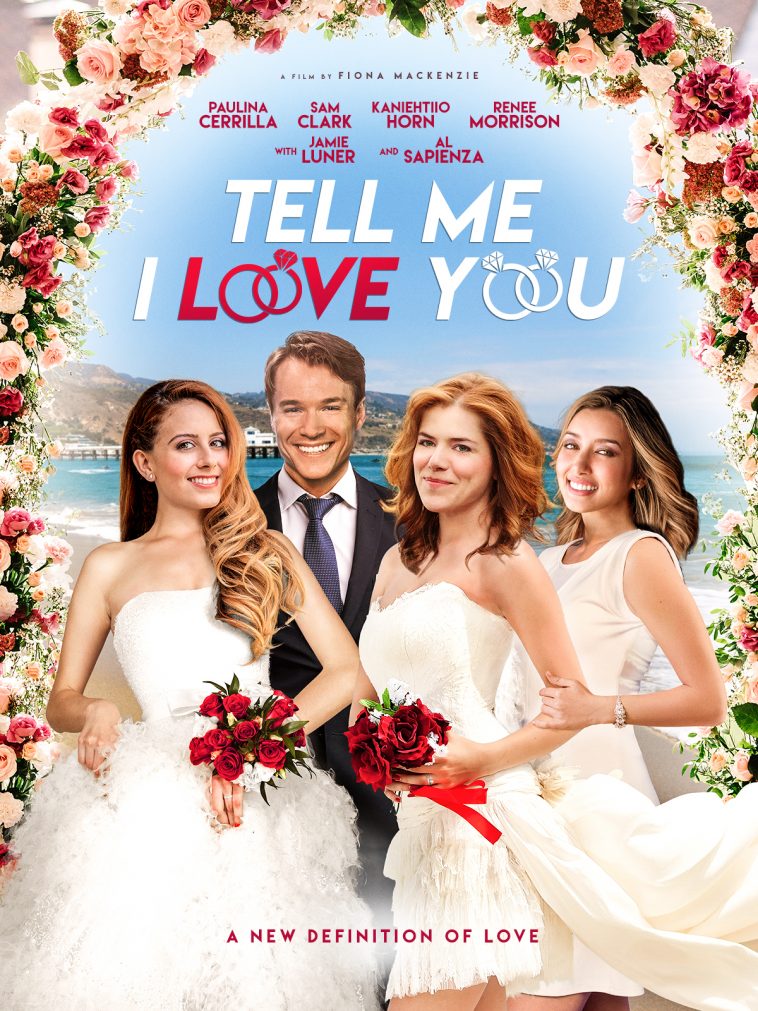 Tomorrow (June 2, 2020), the brand new film Tell Me I Love You, which has been created and directed by Fiona MacKenzie (Bada Bing, Bada Boom, Deadly Little Secrets, Cosa Bella) will be released. It’ll be available on DVD and VOD, and we were lucky enough to receive a screener so that we could review Tell Me I Love You. The trailer was released on May 19.

Tell Me I Love You follows three housemates who are making music together and have been friends since college. Ben, played by Sam Clark (Neighbours, Grease: Live), is the songwriter; Ally, played by Paulina Cerrilla (40 Hours, String Theory), is the singer; and, Melanie, played by Kaniehtiio Horn (The Trotsky, Deathwish, The Man In The High Castle, Letterkenny) is the producer. Ally and Ben have a history as they were in a relationship but clearly they’re better off as friends, whereas Melanie is bisexual and is not ready to settle down with anyone. They’ve been shopping around their song to a few record labels, and one has replied asking for a five-track demo, but they can’t afford the studio time to record it.

Melanie starts to date her new yoga instructor – Cassie, played by Matthew Morrison’s wife, Renee Morrison (High School Lover) – before she finds out that she will inherit a trust fund after she marries a man. At the time, Ally is visiting her family, where her high school sweetheart – who she hasn’t seen in years – proposes out of nowhere, and her family encourages her to get hitched, so she panics and says she’s already engaged. Ben hatches a plan and decides to marry Ally to help her out and to also marry Melanie so they can get the trust fund to record the demo that they need to create for the record label, but life is complicated and complex, how are they going to keep this all a secret, deal with their families who come to visit, where does Cassie fit into all this, and who knew guacamole could be so hazardous?

Be prepared to laugh throughout this film, and marvel at the beautiful location of Malibu. Engaging to watch from start to finish, the film is a great representation of life and how it can be chaotic. Things aren’t always easy especially when focusing on a career and especially when money is involved. Well acted, great story line, and hilarious comedic moments throughout, what more could we ask for?

Watch The Trailer To Tell Me I Love You Here:

Other cast stars include Jamie Luner (Just The Ten Of Us, Melrose Place, All My Children, Savannah), Al Sapienza (The Sopranos, Jack Ryan, Person Of Interest) and former O-Town band member Ashley Parker Angel (Hairspray, Wicked), amongst many others.

Tell Me I Love You will be released on DVD and VOD on June 2, distributed by Vision Films. We assure you that this is one rom-com you do not want to miss. Look out of interviews with some of the stars from Tell Me I Love You, following this film review, in a few days time.

Let us know what you thought of Tell Me I Love You, as soon as you’ve seen it, over on Twitter @CelebMix.