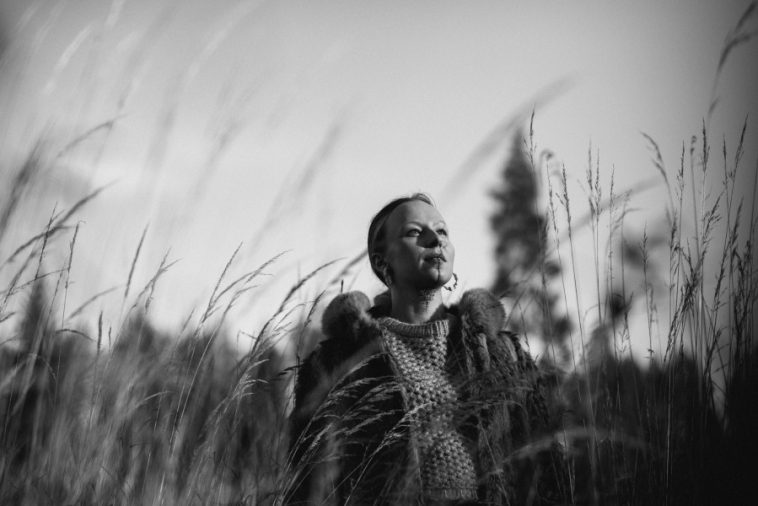 Speaking about the inspiration for Slow Bloom, Irene shares, “I’m done with music industry representatives hinting to women that it’s too late to lead a relevant career after turning 30. Music doesn’t have a shelf life, it’s always relevant. Being over 30 and a mother is a great place to make art. You know who you are, you take no bullshit. You know your boundaries and you know how to howl when needed.”

Written and composed by Irene in collaboration with Noah Rosanes, “Boundaries” opens on shimmering, finger-like filaments of ethereal pop and slowly escalates to dark, lush waves of synth-pop, at once wickedly alluring and portentous.

Accompanying “Boundaries” is a 5-part mini-visual series, about which Irene explains, “I was five months pregnant when the visuals were filmed, and the presence of the animals made me encounter my primitive mother instinct for the first time. It was a strong experience – both empowering and humbling. Wild nature survives without a human being, but a human being doesn’t survive without the mercy of nature. It’s a crucial reminder.”

CelebMix spoke with Irene to ask about the inspiration behind “Boundaries,” the import of the title Slow Bloom, and what she’s working on right now.

What inspired your new single, “Boundaries?”

‘Boundaries’ is inspired by the archetype of the wolf. Wolves are often labeled as aggressive, but they actually are peaceful creatures who enjoy a quiet life with their loved ones. In Finnish folklore, the wolf is the boundary guard of the underworld. The underworld is ruled by a wicked shamanic queen who gives birth to the world’s first wolf. I think every human being should give birth to an inner wolf or two and learn to vocalize healthy boundaries. A person who knows how to say no and takes no bullshit is often seen as dangerous – in a good way.

What do you want people to take away from the song?

Wolves vocalize their boundaries clearly by howling, to avoid unnecessary conflict, drama, and violence. We as humans should learn that, too. If you respect your own boundaries and articulate them clearly, you will be respected. It’s a crucial skill for a woman in the male-dominated world, too.

You have a new album coming, entitled Slow Bloom. What can you share about the album?

The title refers to the concept: releasing a full body of work gradually, song by song as I go. In a world that expects creation to happen fast, I’ve wanted to be faithful to my own tempo and do everything on my own terms, no matter how long it takes. ‘Slow Bloom’ is about a woman’s time, creativity, and finding one’s own voice.

I got my first piano when I was five and instantly fell in love with it. I ended up studying with a sexually abusive piano teacher for my whole childhood and teenage years – and over the years the love of music turned into a deep trauma. Another ten years went to healing and reclaiming my voice, and somewhere in the process my solo career just started to live its own life. Music is my first love and my healer.

I’ve always been fascinated by uncompromising artists who create a whole universe of their own. I love Sigur Rós for having the guts to come up with their own language. I love Lady Gaga for using her voice and platform for important causes and always speaking from a place of passion. I’ve also loved Lana Del Rey already from day one when she was shy, off-key yet still fabulously uncompromising in her own downtempo vision.

I don’t know, I think it can only be measured from the inside. They are the ones who create on their own terms, go to bed at the end of the day with a sense of purpose. I would assume that artists like Björk, Erykah Badu, and Nick Cave feel like it. They’ve stayed authentic and relevant for years. I think they have been killing it for a long time and still are. Authenticity is timeless.

There’s a lot of original talent and wonderful Nordic oddity in Finnish music. But as a collective, we should have more guts to promote it into the world.

I listen to ASMR! It also fascinates me as a phenomenon. I believe that its massive success shows how tired we are of social media, the constant noise, and inauthentic sharing. We crave closeness, togetherness, and the human voice. That’s why we need music, too.

Why do you make music?
I just don’t know how to exist without making music. It’s my way of inhaling, exhaling, and finding my own truth. Music is one of the greatest healers – and there’s a lot to heal in this world.

I’m working on a TV theme for ‘Untold Arctic Wars’ and preparing to release the next songs from the album in the near future. In the meantime, I continue writing and growing into my motherhood.