The Flash Season 3 is well underway and we’re thankful that the new villain isn’t an evil Speedster.

‘Magenta’ kicks off with what we’ve all been waiting for what seems a lifetime for. Barry and Iris are off on their first official date.

Unfortunately, the date turns into an awkward mess and doesn’t go down in the history books.

In this episode, two fan favourites return. Earth-2’s Harrison ‘Harry’ Wells (Tom Cavanagh) and Jesse (Violet Beane) make a dramatic entrance with Jesse running in circles as the show’s new Speedster. Harry pleads for Team Flash to help convince Jesse to not become a superhero to ‘keep her safe’.

Due to nobody willing to step up and help, Harry turns to Caitlin to speak to Jesse as Caitlin doesn’t have powers. If only you knew, Harry.

Jesse being a speedster doesn’t sit well with Wally. Wally has always been obsessed with speed, and he really wants to help. After a heartfelt conversation with his father, Joe, he hopes that like Jesse, he will become a Speedster. Joe tries his best to convince Wally that he’s better at using his engineering skills to change the world. Despite Joe’s best attempt, Wally has none of it and sets his heart on becoming like Jesse and Barry. He even goes to the extent of risking his own life to jumpstart his said power.

Later on, Caitlin tries to help Harry convince Jesse that being a Speedster isn’t all that. In the end she fails and decides to put Harry in his place. Because of the failure, Caitlin tells him that he needs to embrace her superpowers instead of telling his daughter what not to do.

Moving over to the metahuman crisis, meet Frankie Kane, a young girl in a terrible foster situation. 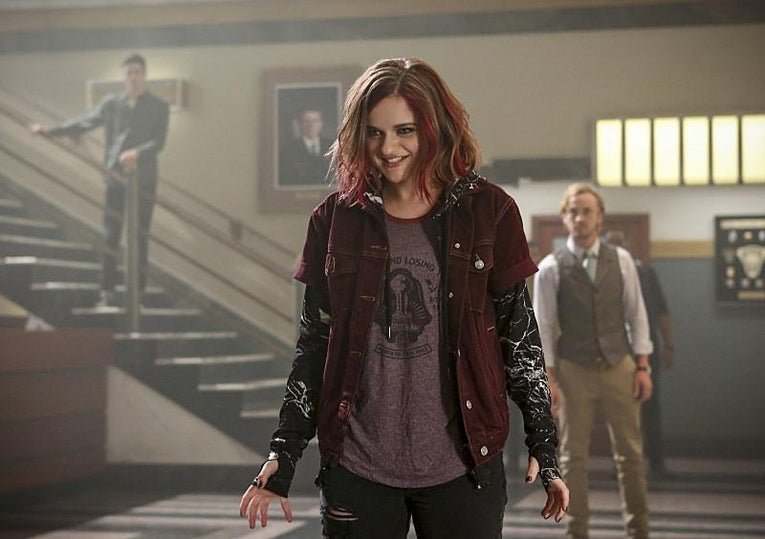 We learn that Frankie has a dark side when Dr. Alchemy changes her. The character is introduced after her foster dad was rushed to hospital after a lamppost crashes into their home. Despite the incident happening right in front of her, the teen remembers nothing, blaming it on a blackout.

The alter persona, going by the name of Magenta, is trying to rid the world of the terrible foster dad she has. Magenta is also trying to take over Frankie and become the host, which is what she was like in the other timeline.

Later on in the episode, the foster dad that was in the accident is in hospital but to Magenta’s dismay, has survived. As a result, Magenta lifts a tanker with her superpowers to crash into the hospital to kill her foster father once and for all.

Finally, Barry comes to the rescue and brings Frankie back to reality. However, he doesn’t do this on his own and has the assistance of Jesse. Harry and Jesse share a beautiful father/daughter moment where Harry goes all out; presenting Jessie Quick with her own superhero outfit.

Another episode down and we’re not any closer to find out who Dr. Alchemy is. Only time will tell.