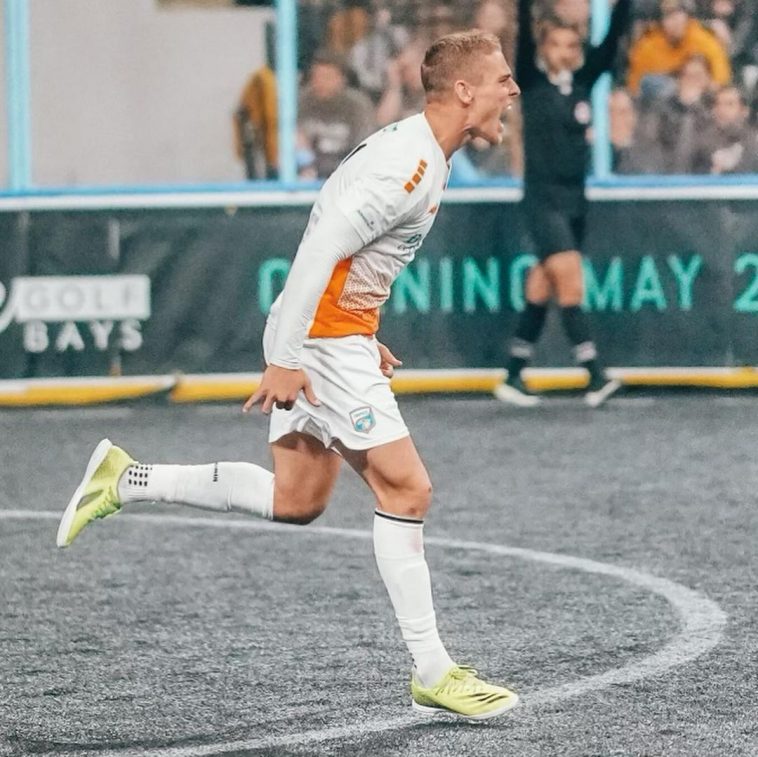 Zach Reget plays the game prayerfully and powerfully. He looks up to Stephen Curry as a Christian athlete. Reget captions one of his Instagram posts with this mantra “You pray like it is up to God. You work like it is up to you.”

Zach Reget was the leading scorer for the Florida Tropics in last spring’s Major Arena Soccer League playoffs. Zach played his first season for the team in the 2021/2022 season with great success. This July, Zach Reget signed a new 2-year contract with the soccer club. It’s safe to say the team is ecstatic to have him locked in for at least another two seasons.

The Tropics head coach Clay Roberts might just be the most excited to have this star player on the team again. Roberts says Reget is “a pivotal part of how we play…to have Zach back with us for multiple years is fantastic because of his presence.”

Zach is a phenomenal player and a top-tier teammate. Coach Roberts explains that “the leadership he displayed last year became huge. When you’ve got a player that’s encouraging and pushing the team vocally and then matching it with his play, that’s how you get an armband put on. Last year was a breakout year for him. He showed extreme confidence.” A player like that is worth keeping around. The Florida Tropics are doing just that.

As for his fans, Zach has gained a strong following in his short career. He is popular among people who love and follow professional sports. More specifically, Christian sports fans and athletes make up a large part of Zach Reget’s fan base. Zach attended a Christian college and has been open about his faith on social media. His fan base continues to grow as his career progresses.

Reget hails from Kenosha, Wisconsin. His passion for soccer began at a young age and blossomed into a successful career. While attending Trinity International University, he was a starter for their soccer team for four years. He claimed the following titles during his four years on the team.

Zach Reget’s decorated collegiate soccer career was a great foundation for his professional career. He joined the Major Arena Soccer League after college and became 2018/2019 Rookie of the Year.

Reget seems to be excited about his 2-year contract, too. “Let’s get to work!” he proclaimed on social media when the announcement hit. The Florida Tropics is a reputable soccer club. Zach plays on its Major Arena Soccer League (MASL) indoor team. He’ll bring skills from his first year with the Florida Tropics and his experience on the USA National Futsal Team.

Futsal is a specific type of soccer. It’s typically played on an indoor pitch with 5 players per side. It’s fast-paced, exciting, and technical. Reget’s futsal skills speak volumes about his skill and finesse indoors and outdoors.

Reget plays pivo, otherwise known as center-forward, for the USA National Futsal Team. He played in a tournament of The Confederation of North, Central America, and Caribbean Association Football (CONCACAF). He assisted in a silver metal win for the team and qualified for the World Cup in 2021. Reget played in every USA National Futsal Team game in the 2021 World Cup.

All in all, this player has accomplished a lot in his career, and he’s just getting started. With 83 goals, 49 assists, 16 points in 7 postseason games, and more in just a few years, Zach Reget is a player to watch.