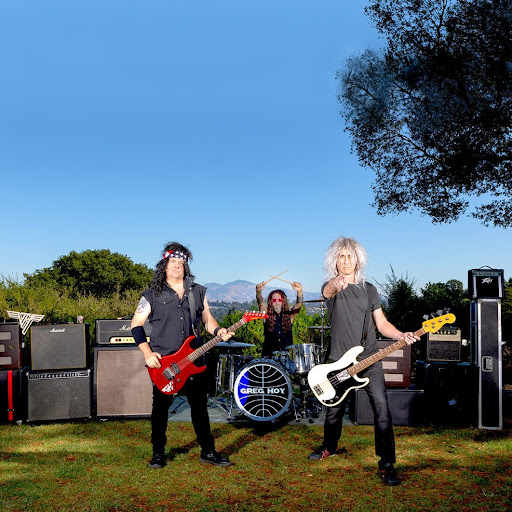 Influenced by the late, great Eddie Van Halen – who sadly passed away in 2020 – Greg Hoy & The Boys have released, this month, a classic rock EP, titled “Demons At Night”. It contains four high-energy ’80s-inspired rock tracks that will certainly impact every listener. This follows up their album release of “The Special Party”.

Greg Hoy & The Boys are a three-piece rock band consisting of Greg Hoy, David E. Richman, and Jon Reider. They have been working in the music industry for many years, with the band itself dropping their debut album “Fomo Yolo Ono” back in 2016. They’ve been building quite the name for themselves through critical acclaim, incredible live shows, and rising Spotify streams – with “Sure Got Cold After the Rain Fell” becoming their most-streamed track on the platform with almost 50,000 streams. Greg Hoy has received comparisons to Jack White, Tom Petty, and Brittany Howard and toured across 25 dates in the US last year. The band’s latest EP, “Demons At Night”, was recorded in isolation during the pandemic.

The songs were written by California-based Greg Hoy who sent the demos over to the East Coast where the Engineer, Tom Beaujour, recorded drummer David E. Richman at his Nuthouse Studios in northern NJ. Then, some incredible solo work by western Pennsylvania guitarist Jon Reider was recorded with additional production by Nate Fink in San Francisco. This EP really did take on a life of its own, flying across the US.

Full of hard rock from the very beginning, Greg Hoy & The Boys are ready to unleash power out into the world with this EP, “Demons At Night”. The first track “1983” is a purely instrumental track and gears the listener up for the following three tracks, a progressive vibe is heard throughout, building the listener’s anticipation. The title track goes in hard and with high energy and blasting chords of both the guitar and the drums definitely bringing the ’80s into the current decade, with Greg Hoy’s vocals passionate and on point, melding with the track and allowing the entire band to shine – special shout-out to the incredible guitar instrumental riff. “Everybody Wants To Be Somebody” tones it down slightly rhythmically allowing the catchy hook and chorus to take the spotlight, with Greg Hoy’s vocals shining throughout – another incredible Van Halen-inspired guitar instrumental is heard that really transforms the vibe of the track. The final song, “Stripes”, has a more electro-rock sound, surprising the listener considering the previous tracks, with the drums totally making themselves heard this time around, while Greg Hoy is vocally impressive as we feel we’re being transported back to the late ’80s – and, of course, another awesome guitar solo is included, this time on what sounds like an electro-guitar.

Stream the EP “Demons At Night” by Greg Hoy & The Boys on Spotify here:

“Demons At Night” by Greg Hoy & The Boys is available to download and stream right now.

Let us know what you make of “Demons At Night” by Greg Hoy & The Boys on Twitter @CelebMix.