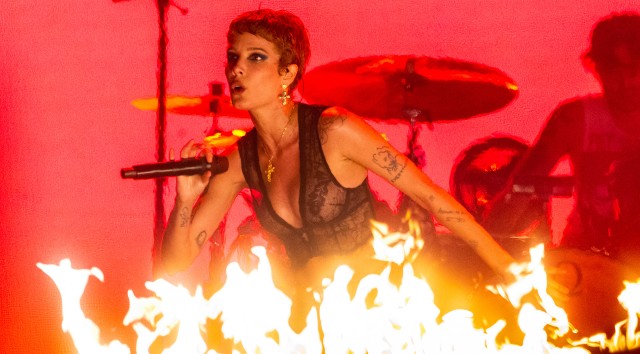 “This show isn’t what you guys think it will be” Halsey teased the crowd during the opening 15 minutes of their set, and she was not kidding. Legions of fans lined the barricade knowing exactly where Halsey would her first ever Reading headline slot, but the passers-by who were probably expecting the pop classics that aided their rise to global fame were instead hit with a political-punk attitude and a masterclass in headlining Reading.

Opening with videos of Women’s rights protests, a visual created after the Roe vs Wade overturning earlier this year, the set was overflowing with power. Blaring over the speakers was Nightmare, the track that kickstarted the ‘Punksey’ agenda, pushing the star into their element. Bouncing through their Grammy-nominated album If I Can’t Have Love, I Want Power with bangers such as Honey, Easier Than Lying and an incredible 1121 demo performance, the show felt like a rebirth of the Halsey the general public knew. From the flames engulfing the stage, circle pits lining the ground, she had shed the previous pop star image and was every inch a rockstar.

I FUCKINNNNN HEADLINED READING!!!!! DID YA HEAR?? guys thank you soooo much for closing out this weekend in a way I will never forget? pic.twitter.com/NmI8LPB4vv

While gritty rock was at the heart of the performance, Halsey classics still made the cut. The brutal breakup anthem You Should Be Sad had the crowd screaming from the top of their lungs, Colors and Graveyard made for a perfect mid-set soft moments. Shortly followed by a singalong to British icon Kate Bush’s Running Up That Hill (Deal With God), which Halsey absolutely devoured.

The standout set moment came in the form of their Bird of Prey head banger Experiment on Me, co-written and produced by fellow Reading headliners Bring Me The Horizon. Surrounded by casual listeners, the crowd fell stunned at how commanding Halsey could be on such an intense track.

Reading has been criticised in recent years for turning too mainstream, with social media going feral at the idea of a pop (read: female) headliner, but Halsey came to prove you never judge a book by its cover. Leaving the set after her global smash it Without Me (with 15 million copies sold might I add), chatter errupted about how Halsey was nothing like they expected, in the most incredible way possible. She may have been the underdog headliner going into the weekend among the Reading crowd, but she left the biggest impact among the audience, and THAT’s how you do a headline set. Long live HALSEY.