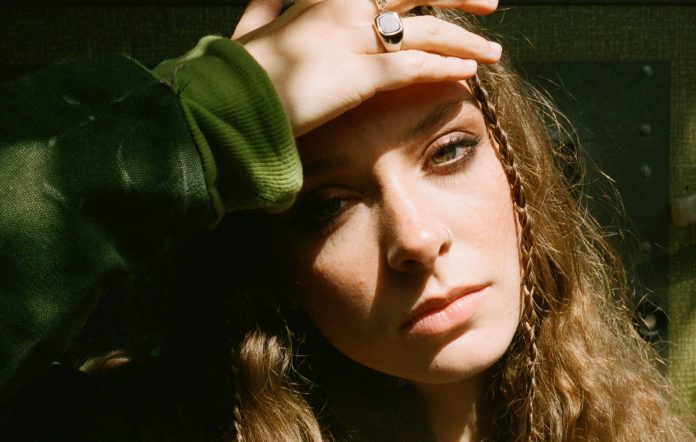 Holly Humberstone has released her new single ‘Please Don’t Leave Just Yet’, alongside announcing details for her forthcoming second EP The Walls Are Way Too Thin.

The singer-songwriters new single is an incredibly special collaboration with Matty Healy of The 1975 and Rob Milton. Having teased this release earlier this year, fans have been eagerly anticipating it and we can confirm it is worth the wait. The atmospheric backline of the track is entwined with a hint of synth-pop undertone as Holly’s emotive vocals lead the way accompanied by Healy on backing vocals.

It tells of the fear of when you know someone you love is going to leave, but the feelings surrounding it and everything you’ll do to make it stop happening. Even if that includes trying every delaying tactic possible, “And I’ll even help you pack your shit but please don’t leave just yet, don’t leave just yet“. We flutter from sassy and powerful punches of “I know I’m only young but I’m not a fucking idiot” to the moment of haunting realisation as Holly sings “I think I gave a little too much didn’t I?“. Lyrically is where Holly Humberstone shines above the rest and it’s the same with ‘Please Don’t Leave Just Yet’.

Holly says of the track: “The song is about wanting someone to stay so badly, even if only for five more minutes, because you know how much it’ll hurt when they leave. I think the desperation in the words really sums up how I was feeling at the time and how so many people must’ve been feeling last year when we were all completely starved of human connection! I often write songs with a bit of a visual in my head, and I kept picturing solitary places, like drifting far out to sea, so far that you can’t find a way back, or old deserted cargo shipping yards with all the lights at the edge of the city.“

Like what you hear? You can stream/purchase ‘Please Don’t Leave Just Yet’ from HERE.

The new single will feature on Holly’s new EP The Walls Are Way Thin alongside previous single ‘Haunted House‘ and the title-track which was released earlier this year. The EP looks set to highlight Holly’s sincere vocals and lyrical maturity; as shown with her previous material released to date.

On the EP, Holly says: “This EP represents a feeling of being lost. It’s the kind of lost that makes you question who you are and where you belong. So lost that someone might need to find you again because you can’t find yourself. That’s how it felt to move to Liverpool, then London, and be in transit between cities and never settling”

We’ve hailed Holly as one to watch since prior to the release of her 2020 debut EP Falling Asleep At The Wheel and if you haven’t already become hooked on her captivating sound and relatable, storytelling lyrics then now is the perfect time. This year has already seen her announced as an Ivor Novello Rising Star nominee and as the BBC Sound of 2021 amongst other accolades. We’ll say it again, but Holly Humberstone is one to watch.

If you like what you hear, you can see Holly Humberstone live this year. Her first four rescheduled shows at Omeara in London between 15th and 18th August are sold-out however she will be heading out on tour to play further headline shows later this year. See her live at the following dates, many of which as expected are already sold-out:

Holly will also be appearing at this year’s Reading and Leeds Festival, All Points East, TRSNMT Festival and This Is Tomorrow Festival. Keep your eyes peeled on Holly’s socials (Facebook, Instagram, Twitter) for more details on her live shows and music updates.

The Walls Are Way Too Thin EP is set for release on 5th November 2021 via Polydor/Darkroom/Interscope/Universal Music Canada and can be pre-ordered from HERE.