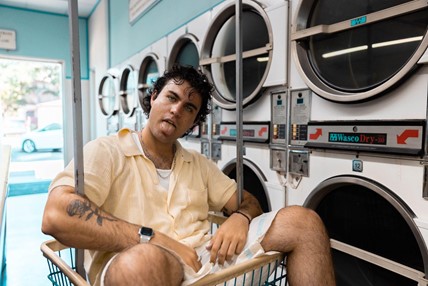 Working with his collaborator Mark Diedrichcon, aka Farco, “Never Alone” offers visceral, stripped-down layers of music, displaying the evolution of Ian’s sound. The feel and mood of “Never Alone” are upbeat, in opposition to Ian’s own story which has had its darker moments, including mental health issues from a young age – leading to battling alcoholism and addiction.

A “spiritual experience” is the phrase Ian uses to describe his first drink as a sophomore. Alcohol made his worries disappear … at least for a while. Then things got rough. Later, he entered rehab, the toughest of his struggles. Now, he’s been sober for three years and remains dedicated to helping others battle the demons of alcohol, using his platform to reach others. Eventually, he would like to start his own foundation.

“Never Alone” opens on buoyant guitars riding a driving, radiant rhythm pushing out luscious indie-pop energy. Doo-doo-doo-dah harmonies give the tune glowing, optimistic depth and dimension as Ian’s deluxe tenor narrates a tale of love and imminence despite being apart.

“But in an instant, A spark and light / A moment in time, An eye meets and eye / And they remember they’re never alone.”

LA On Lock said, “Light and upbeat, ‘Never Alone’ from Ian Oshér is one of those songs that grabs you in immediately and refuses to let you go. The LA artist rides a nice calm wave to deliver the track. There is a subtle energy and spark without the track resorting to gimmicks or overproduction. The simple, straightforward lyrics and arrangement work quite well.”

With “Never Alone,” Ian Oshér establishes himself as not only an artist to keep an eye on, but a first-rate vocalist and songwriter.