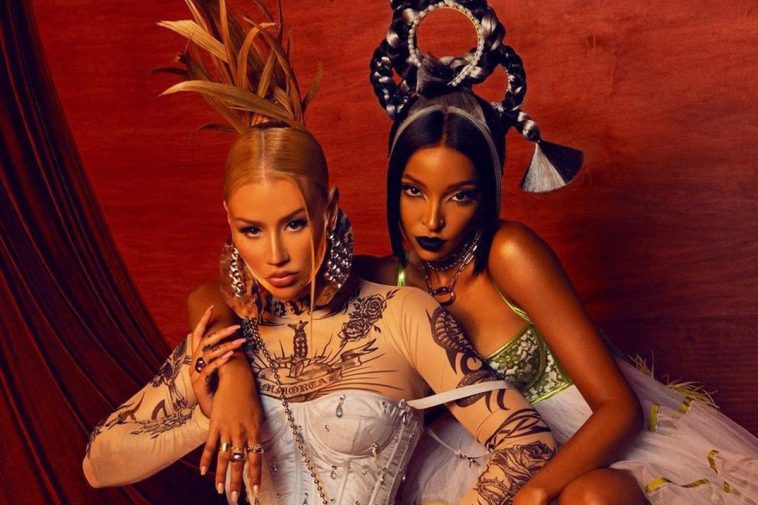 This week we got a new addicting single from Iggy Azalea and Tinashe, titled “Dance Like Nobody’s Watching”. It is the lead single from Iggy Azalea’s upcoming third studio album, titled End Of An Era. It’s the second time these two artists have collaborated, their first release being the awesome remix of “All Hands On Deck”. This follows up Iggy Azalea’s EP, Wicked Lips, and Tinashe’s single “Rascal (Superstar)”. Tinashe is also set to feature on JoJo’s upcoming deluxe album, on the track “Love Reggae”, which is out tomorrow.

Iggy Azalea, real name Amethyst Kelly, is an Australian hip-hop artist, who started at the bottom and has now really earned her place in the rap music industry and she continues to prove herself time and time again. She’s had a bunch of various hits, namely “Fancy” featuring Charli XCX and “Black Widow” featuring Rita Ora, as well as featuring on Ariana Grande’s “Problem”. She finally released her sophomore album In My Defense, last year after becoming an independent artist, which spawned the singles, “Sally Walker“, “Started“, instant grat single “Just Wanna“, and “F**k It Up” featuring Kash Doll. Then she released the EP Wicked Lips after dropping the awesome collaboration with Alice Chater, titled “Lola”, and now she’s gearing up to release her third studio album, End Of An Era, which we cannot wait for!

Tinashe, full name Tinashe Kachingwe, is an American actress and singer, who started off in the acting world by starring in The Polar Express and Out Of Jimmy’s Head. Now she’s a world-renowned singer with global hits such as “2 On”, “All Hands On Deck”, and “Player”, as well as featuring on the chart-successful track “All My Friends” by Snakehips and which also featured Chance The Rapper, and Britney Spears’ single “Slumber Party”. Last year saw her independently release her fourth studio album, titled Songs For You.

This new care-free track has been written by Amethyst Kelly (Iggy Azalea), Bobby D. Session Jr. (Bobby Sessions), Haven, Jordan Harry Monroe Baum, Michael McNamara (Mikemac), and Tinashe Kachingwe, whilst it has been produced by The 87’s. A lyric video was also dropped to accompany the single release.

There’s times when we all dance like nobody’s watching and it always infuses confidence inside of us, and that care-free, do-what-I-want attitude is flooded throughout this song and will certainly spread to every listener. With references to British drag queen, Baga Chipz, and the song “Le Funk” by Chic, this addicting new song has had us dancing all week!

The lyric video is just as fun as the song itself but acts more as a promo video for the song since not all the lyrics are displayed. It’s clear that Iggy Azalea and Tinashe had fun at their photo shoot for this lyric video and their style is completely on-point. Fierce throughout, this excites us for the upcoming music video, which Iggy Azalea confirmed will be released at a later date.

“Dance Like Nobody’s Watching” by Iggy Azalea & Tinashe is available to download and stream right now, via Bad Dreams Records and Empire.

What do you make of Iggy Azalea & Tinashe’s new single “Dance Like Nobody’s Watching”? Let us know on Twitter @CelebMix.