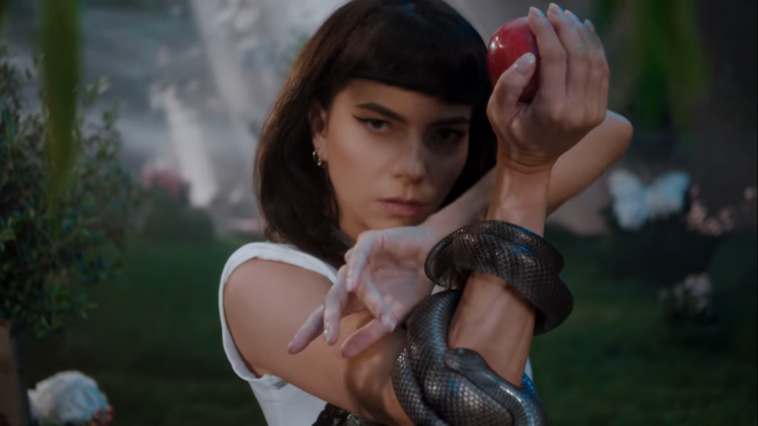 We now have a music video from INNA for her song “Not My Baby” and we are living for it! The single was released last week, and has a deep house vibe going on that excites us for INNA’s new era – we’re so ready!

This music video has been directed by Bogdan Paun of NGM Creative, with Alexandru Muresan acting as director of photography. The production of the visual was handled by Loops Production. INNA is fierce, sexy, and seductive in this new video which contains imagery of snakey people and the Garden of Eden crossed with the story of Snow White and the Seven Dwarfs.

The “Not My Baby” music video starts with INNA, wearing a pink latex couture bra paired with flared ripped jeans, lounging on a rack of white plastic chairs with ocean waves green-screened behind her, giving us relaxed beach-vibe realness. The second visual is captured in a garden with INNA – wearing a white top over a black flower-print dress – handling a snake, which crawls all over her arm. She has a red apple in her hand, which is suggestive of Eve taking the apple from the garden of Eden, but also suggestive of Snow White who falls into a deep sleep after eating an apple from her step-mother, the Evil Queen.

INNA always has a lot of fashion in her music videos, and this one is no different with additional cut-scenes throughout, one of which shows her wearing a leopard-print bra, and another shows her wearing a Norma Kamali black and nude swimsuit paired with either metallic silver knee-length boots and black knee-high boots.

The ending sees the snake slither away, around the apple – it’s time for INNA to say goodbye to snakes or, in the case of the song, lovers who lie. She’s done with this guy who keeps letting her down.

Watch INNA’s Music Video For “Not My Baby” Here:

It’s not really what we were expecting since we know how much she loves to dance – especially when she’s on stage – and we thought this song would allow her to do just that in a music video, something like her previous visuals for “10 Minutes”, “Be My Lover”, and “Cola Song”. Instead, we see a high-fashion conceptual art piece, which is similar to “Nirvana“, one we can’t help but love.

“Not My Baby” is available to download and stream right now, via Global Records.

What do you make of INNA’s music video for “Not My Baby”? Let us know on Twitter @CelebMix.