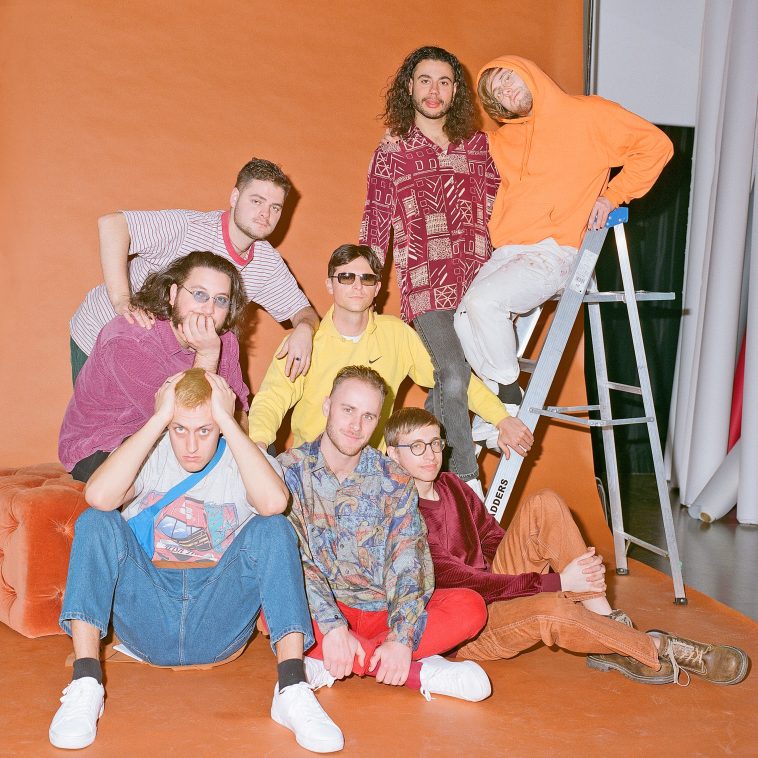 Multinational octet Busty and the Bass have been producing artistic interpretations of jazz and R&B since they formed as a group of university friends back in 2011. In 2015 they dropped their first collection of tracks called ‘GLAM’ and then followed this up in 2016 with their second EP ‘LIFT’.

Releasing their debut full- length ‘Uncommon Good’ back in 2017, the band have since signed with the influential label Arts & Crafts and have released three notable singles: ‘Clouds’, ‘Summer’, and ‘Baggy Eyed Dopeman’ ft. George Clinton.

Today, the band have dropped their seismic new track ‘Out of Love’ featuring the iconic Macy Gray and in celebration, CelebMix decided to catch up with the group to talk about their music, the important Black Lives Matter Movement and the inspirations behind their songwriting.

First off, how are you all? Any exciting plans for the day ahead?

We’re doing good! I think this time has given us a chance to breathe. Even though this has been an overall difficult time, I think it’s been a beneficial time for personal growth.

We’ve all been diving into personal projects, music oriented and not music oriented. As a group, we’re just super pumped to start releasing the songs we’ve been sitting on for years. We’re hoping that we can all meet up sometime soon when it is safe to celebrate – the band is currently spread across Canada and the States.

We wanted to talk about the important Black Lives Matter movement, which you guys have expressed a lot of support for across social media. What do you think are some of the most important changes that need to happen before real progress can be made?

There is so much that needs to happen. One place to start is investment in black communities. A big point that has come up over the last couple of weeks is the idea of re-allocating some of the police budget towards schools, social services, and other programs. This is something that I think could be very helpful. But in order for resource re-allocation to become a reality, it’s going to start with demanding action from our elected representative, and voting in other people that will implement this shift in resources if they won’t do what’s right.

As a band of white guys, we are still figuring out how to use our voice appropriately without taking up the space that could be better filled by a person of color. Right now, I’m focusing on some overdue learning. I don’t think I’m the right person to start saying what should happen first – but I’m trying to listen to black voices to learn what those priorities should be.

In my experience, the music industry is overwhelmingly run by white people, and that’s obviously a huge problem. We haven’t always been the best at this, but as a band we are actively trying to improve at including people of colour on our bills and in other opportunities. The truth is we wouldn’t have had the same opportunities and be where we are today if we weren’t white – or we would have faced barriers and obstacles that we haven’t had to face.

We need to continue listening and educating ourselves about the history and continued experience of people of colour in order to understand how we can help continue this movement to end racism and live in a more just society. Black Lives Matter. Learn about the history of black artists in the music industry, and give black artists the recognition they deserve. Support black artists. Support black owned business in your community. Many of us can make the biggest impact closest to home. Start local and go from there.

Your sound is heavily influenced by Black American music such as jazz and soul. How much do you feel society as a whole owes to black music? And where do you think we would be without it?

We started this band playing Marvin Gaye and Stevie Wonder covers. Basically all of the music that we played for the first couple of years of the band were inspired by Soul/Motown and Funk music – genres created entirely by black people.

It’s important to remember that Jazz, Blues, Soul, Rock n Roll, Hip Hop – all genres created by black people provide the backbone for pretty much all popular music today. Even a bunch of our favourite electronic artists, have their roots in techno/electronic music that came out of Detroit in the late 80’s – also created by black people. We owe everything to these originators.

You recently collaborated with funk originator George Clinton on your track ‘Baggy Eyed Dopeman’. How did this collaboration come about?

After coming up with a demo for the song, we knew we wanted to have a feature on it. We started throwing around artists that would fit the song, and someone made a joke that it’d be cool to get George Clinton on it… Crazy enough, our producer Neal Pogue knows him. He sent George the song and he was down to work on it. The whole thing seems ridiculous. We couldn’t be more proud to work with a legend like that. He is one of the originators. A true master.

And what was the inspiration behind the track?

The song was written mostly by our keys player/vocalist Alistair Blu while on vacation visiting his family in New Zealand. He came up with the skeleton of the song from a piano riff and a few vocal melodies, then brought that idea to the rest of the group. We all jammed it out and figured out how we could make it a complete track, adding horns, acoustic and electronic samples and drums etc. The inspiration for the song came from a mix of the show-band theatrics of Cab Calloway, mixed with the psychedelic funk world of George Clinton.

Let’s talk for a moment about the visits that you have been making to schools all over America whilst touring. How did the idea come about? And why did it feel so important to give these kids such an experience?

We’ve been going to schools as often as we can when we have time off from touring. We started these visits back in 2014 when we did our first tour down the east coast of the States. We realized that a huge reason that we all ended up studying music in University (which is where we all met) was because of the encouragement we got from passionate music teachers in our school music programs growing up.

Visiting these schools allows us to give back and hopefully provide a spark to kids that are already into music, and if not, maybe inspire them to pick up an instrument and start playing. So many schools have recently had their music programs cut because of decreased budgets, and I can only imagine what COVID- 19 has done to arts/music programs.

With our visits, we hope to inspire students to create and collaborate as well as hopefully inspire school boards and parents to invest in music programs at their schools if there isn’t one already, because we know first hand how important these programs are.

Has there been any reaction to your music at one of these events that has really stood out?

All of them have been super gratifying, but it was really special to go to our guitar player Louis’ high school in the Upper West Side in NYC. They have a crazy setup with a venue and recording studio in the basement of the school. Those kids don’t know how lucky they are haha.

We were a bit exhausted from playing a show at the Bowery the night before but it was great to play for a class that seemed super into the music. But there’s also been a connection that’s unmatched when we’ve played at elementary schools, because the kids seem so fascinated by what we’re doing. I think it might be the first time a bunch of these kids have seen live music. They always have the most fun dancing along when we start playing.

So, your latest single ‘Out of Love’ featuring the legendary Macy Gray has just dropped. It must feel pretty incredible being able to share a song with an artist of her stature?

It’s huge. We always been a fan of hers. She has one of the most unique voices I’ve ever heard in r&b/pop music and its surreal to be able to collaborate with her. I’m also happy that the track we made with her is energetic. It just seems like the right vibe for this summer. I think people need a nice dance track right about now.

Macy first took notice of you guys when you shared your performance of her hit song ‘I Try’ on social media. What were your first reactions when you heard that Macy Gray had just tweeted about your performance?

I mean we had been covering that track for years so it was great to have her stamp of approval! A tweet is one thing, but actually getting to work with her is a totally different world.

How did the writing process for this track come about? Did you write it with Macy in mind? Or did her feature come later on?

This track actually started as a remix of another song that our trombone player Chris made and we thought it was so dope that we decided to make it our own. I think the first versions of the song only had our vocalist Nick on it, but then we started toying with the idea of getting a feature. Macy seemed like the perfect fit for the vibe of the song. We got linked up with Macy through our producer Neal Pogue. Shout out Neal ! We sent her the track and she loved it.

Thank you for taking the time to talk with us. It’s been a pleasure. Do you have anything that you would like to say to our readers to finish things off?

It’s been years since we’ve been in the U.K . We really hope we can get over there soon and play a gig for you all !!

Listen to the group’s brand new single ‘Out of Love’ ft. Macy Gracy below: