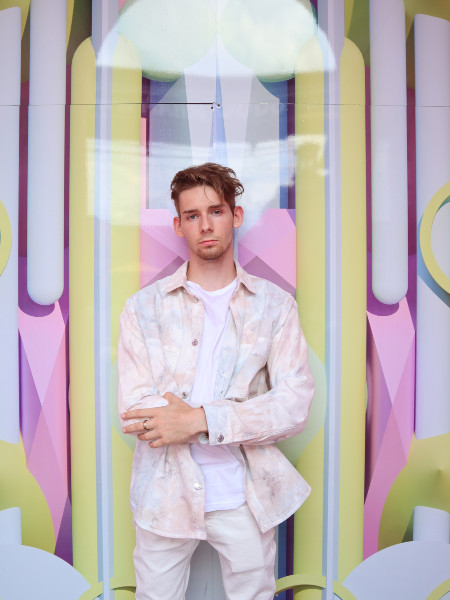 Toronto alt-pop artist Matthew Zeitler releases his brand-new single, “Let’s Play,” a song about the chase that takes place when meeting someone new.

A self-taught producer and singer-songwriter, Matthew attracted vast attention with the release of “Coming Over,” “Runaway Love,” and “I Hate Goodbyes,” with each amassing more than one million streams on Spotify, along with placement on Spotify’s ‘We Be Vibin’’ playlist.

Right now, Matthew is working on his new album. While speaking with Canadian Beats’ Sarah Tomlinson, Matthew spoke about the album, saying, “We don’t have an exact release date for the album, but I can promise there is so much music coming. For now, we’re going to continue to put out these songs and give them the individual attention they deserve. In terms of sound, some of these songs are similar in style and some are completely different, which is something I’m excited about.”

With over 35,000 monthly listeners on Spotify, Matthew’s music, a delicious blend of ‘00s flavors and contemporary pop, is not only captivating but delivers compelling energy.

CelebMix caught up with Matthew Zeitler to find out more about the person behind the music.

I actually wrote ‘Let’s Play’ because I found it funny how hard I’d fall for girls I barely even knew. I also knew that a lot of people could relate to it. I think we all do it. We find somebody with common interests, and then get excited about the idea of hanging out with them. It’s great meeting people, but I think sometimes we can all be a little obsessive. We’ll think that some of the smallest things matter when they really don’t. The song was basically just me making fun of myself for it.

What do you want people to take away from your music?

For me, all I really want is for people to hear my music and share it with their friends. Just the idea of someone playing my song on repeat is so awesome to me. I’ll have some really kind people DM me on Instagram telling me that they love my songs, and it’s honestly the coolest thing. If my music makes people happy and brings joy to their lives, then I’m succeeding as an artist. I know that sounds cheesy but that’s why we all listen to music, and I want mine to be a part of that.

I’ve always been around music since I was a kid. My dad plays acoustic guitar, and my mom is a great singer, so I had an ear for it growing up. I taught myself piano when I was about 13 and then started creating electronic music by 17. What really got me into making my own music though was just trying it out and realizing I loved it. It was that simple.

I listened to a lot of EDEN and blackbear early on, so they were a huge influence starting out. I also listened to Lauv and Jeremy Zucker later on whose sounds I really liked as well. In the beginning, when I was creating my own sound, these artists’ influences were heavily present in my music. This changed later though as I naturally just started to find my own style that led me further away in terms of similarities. Still, I think there’s still traces of all the music I love in my sound today.

My sound developed a lot more naturally than by me trying to push it. I think most artists starting out will always try to sound like someone else. This is fine though because it’s really our only reference point. We want to sound as good as the people we think are good. What starts to happen though is we get more comfortable with our voices, and our true sounds start to come out a lot clearer. That’s exactly what happened with me. Once I allowed my sound to develop more naturally, I progressed a lot quicker.

I mentioned Jeremy Zucker earlier. He just released his new album CRUSHER and it’s great! I’ve always been a fan since some of his earliest music, so I’ve really seen him develop and succeed as an artist. The same goes for Lauv, who I’ve also listened to early on. It’s inspirational to see artists I’ve followed for so long be doing so well now. It makes me excited for what’s to come in my career!

I’ve always been a big fan of storytelling music. I want my lyrics to be able to say something and create a visual scenario in the listener’s mind. I find I don’t need a particular thing to inspire me to write a song, it’s more just an idea that comes to me. Sometimes I’ll be really excited to write something, but I don’t even know what the idea is half the time until it kind of just comes together as I’m writing the song.  I’m the case of ‘Let’s Play’ though, I knew right away.

I write and record all of my songs at my home studio, and pretty much every single day I’ll work on something new. Songs like ‘Let’s Play’ are ones that I really like and wanted to release especially. My writing process is usually the same, which just involves me singing over a beat and writing lyrics into my phone until it comes together nicely. ‘Let’s Play’ was a lot of fun to write! Everything came together very quickly, and the recording process was smooth.

A lot of new music! I’m going to continue putting out singles right now which I’m really excited to share with everyone! If anyone wants to talk to me then feel free to DM me on Instagram. I’m always responding to my fans, they’re amazing people!