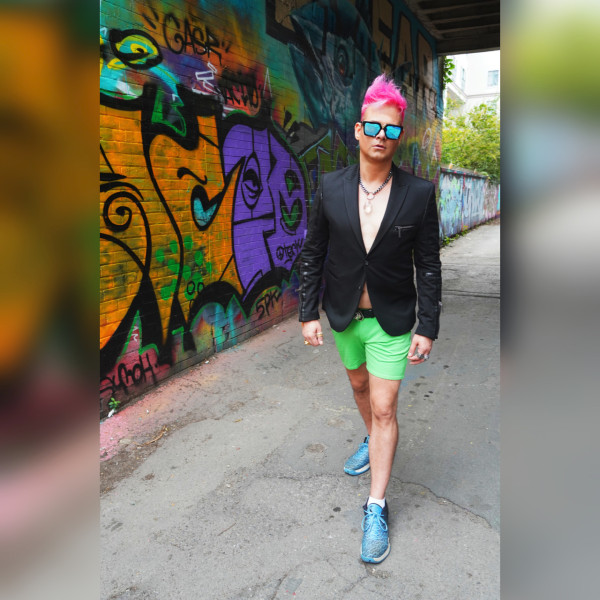 Velvet Code, aka “The Queen Hit Maker,” because of their work with Drag Recording Artists is the founder of SO FIERCE Music and producer for the Season 2 winner of Canada’s Drag Race – Icesis Couture, who recently released her debut single/music video “La Pusetta.”

In addition to being a producer and label owner, Velvet Code is a songwriter and radio show host and has worked with Wendy Starland, Mark Saunders, and Taylor Swift. In 2020, Velvet became part of Lady Gaga’s Chromatica Billboard remix team, creating remixes of “Stupid Love” and “Sour Candy.”

SO FIERCE MUSIC has now expanded into video production and coaching.

CelebMix caught up with Velvet Code to find out more about the person behind the music, how they got their start in music, and how they connected with Icesis Couture.

What’s the story behind the name Velvet Code?

Well, it is a hybrid of my two loves: Fashion and Music Technology. If you haven’t noticed, I am a self-proclaimed fashion addict and retail therapy is my best friend. I love to look for my next big “reveal” moment, whether it is a new pair of shoes, new shades, or a new pair of tight jeans. You’ll notice I wear a lot of Velvet as well, as I love the smooth fabric feel. I’m also allergic to wool, so don’t come near me with wool anything! The “Code” in my name is for my love of programming music, whether it is with my collection of vintage analog synths or plugins that I love to play with. I’m a geek at heart, and I have no shame in that!

How did you come to connect with Icesis Couture?

It was the middle of the summer and I got a call from Icesis Couture’s manager Gia from Pink Mafia Pro. She told me she had an Ottawa queen who wanted to work with me. I was thrilled because I had heard great things about Icesis. We began working on ‘La Pusetta’ shortly after that and she was an absolute pleasure to work with.

Why did you decide to collaborate on her debut single “La Pusetta?”

When the concept of ‘La Pusetta’ was explained and how it was based on La Veneno, I was sold right away! I didn’t know that Reggaeton was going to be a style that I would be able to do well, but I surprised myself! I feel I hit my stride with the percussion elements. And anyone who knows me knows that I love brass sounds, so when we put those in there, I was over the moon!

My mother and father put me on a Mellotron keyboard when I was 3 years old and on the piano shortly after that. My father had musical talent as well, and he would play the accordion while I played the piano. We were a good musical team. From there, I took it more seriously when I moved to New York in 2004, which is where Velvet Code all began!

What motivated you to found SO FIERCE MUSIC?

We were all struggling during the pandemic, and I felt like I wanted to do something out of the ordinary to help other artists. The goal of So Fierce Music is to help LGBTQIA+ artists and allies who have been marginalized and overlooked by the mainstream music industry by providing them with a platform to be heard and seen and to give them the necessary tools to improve and be successful. After a few months, I realized that this was a bigger need than I thought, so we expanded, and we keep growing!

SO FIERCE MUSIC is expanding into video production and coaching. Do you ever worry you’re spreading yourself too thin?

If it was just me doing all of this, then yes I would worry about that. But our end goal is to make sure we are of service to our artists. So we have brought on a team dedicated to each of these areas, and they will spearhead the growth of these sectors.

You’re the producer for some of the artists from Canada’s Drag Race. What’s it like working with so many prominent Queens? Is it as much fun as it looks like?

No that is not true. It is WAY more fun than it looks like! I have the dream job that every girl wanted. I hope that I can continue to work with more queens and help them reach the mainstream markets!

Canadian artists seem to be overlooked by the Grammys, so I have to say The Weeknd is at the top of my list right now. His new album is a reflection of his true self, and we just love it. I’m also loving Katy Perry and Olly Alexander (Years and Years) a lot right now as well. Finally, in the electronic world, who can’t love John Summit! And he’s hot!!!

My Frenchie Jack – he has helped me through a tough January as my mom passed away earlier this month.

My So Fierce family – they are my rock, always supporting me, and helping me stay on track. This includes my closest friends who are considered So Fierce.

What are you looking forward to in 2022?

I can’t wait to announce our big event. It’s going to be an affair to remember. I also can’t wait to tour with Icesis Couture and her new EP! That will be something special. And finally, to perform live at a few festivals that are in the works right now.