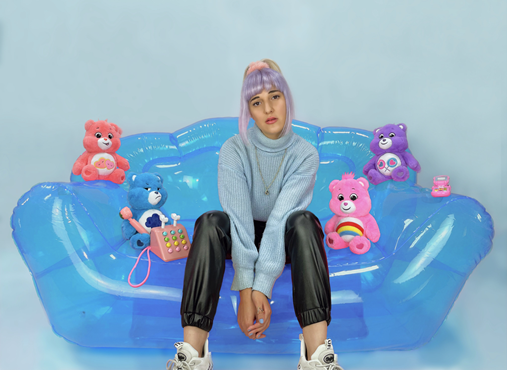 Pop maverick Jazz Mino introduces her debut EP, Someone Else To Talk To, an exploration of loneliness, insecurity, and getting past break-ups.

Born in Manchester and raised in Somerset, Jazz began by busking around her hometown, where destiny intervened: she caught the attention of Apple Music’s former head of editorial, Austin Dabohl. Since that serendipitous moment, she’s appeared on myriad New Music Friday lists, while collecting more than 17 million streams on Spotify and Apple Music, along with global popularity.

With features on The Line of Best Fit, Earmilk, Notion, Wonderland, BBC Introducing, and PRS For Music, along with placements on television’s The Only Way is Essex, Jazz’s name and music have received household recognition.

Encompassing four tracks, the EP begins with “Shy,” a track narrating “having a huge crush on one of her closest friends.” Opening on tasty, percolating colors, “Shy” rolls into a shimmering, pop-laced melody topped by Jazz’s deliciously evocative vocals. The contagious rhythm pulses with a potent cadence, featuring a vibrating bassline.

“Sorry Ur Bored,” an infectious electro-pop tune, rolls out on dazzling pop coloration, brimming with lush surfaces and an enticing beat. Glowing harmonies infuse the song with bright depth and dimension, while Jazz’s not-sorry voice relates the way she feels about her ex.

The title track, low-slung and trembling, travels on tender, compassionate hues as Jazz’s plush, velvety voice tells a serious tale of hoping a former lover finds someone to talk to.

Wow! Someone Else To Talk To exhibits the incredible songwriting ability of Jazz Mino, as well as her crème de la crème voice.