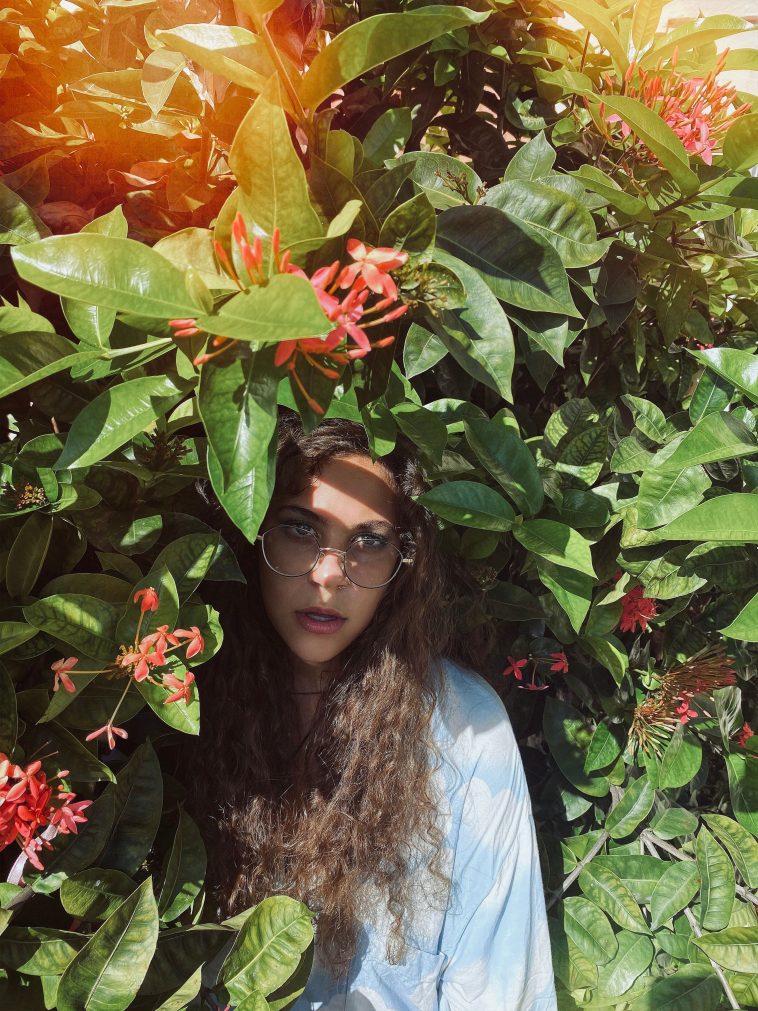 Genre-bending virtuoso, Julia Bhatt, has been carrying the torch for Gen-Z creatives for the past year, tearing down the barriers of “safe” songwriting and composing seismic bangers that are rattling heads and shaking hips.

Her slew of single releases — ‘Miami’, ‘Marco’, ‘I’m Cool’, ‘Bird Girl’ and ‘Tall’ — have garnered her much attention, so we hopped on a call to find out more about the intriguing, Miami-based trailblazer.

Bored and not sleeping well — so life is good.

Your debut EP, ‘2 steps back’ has dropped. How are you feeling?

I feel kind of bad about getting everyone all excited about the EP and only having one new song on it (‘Vampires Suck’), but I guess you could say it’s strategic or something. I’m going to release an album soon which is pretty much all brand new songs. I wrote the new track on the EP a while ago but just never got round to releasing it as it never felt like the right time, but for some reason, now seems perfect.

A new album, that’s what we like to hear! Sonically speaking, what can we expect?

It’s going to have songs that I wrote a while ago, and also songs that I am in the process of writing now. I’m tapping into more of an electronic vibe on the new stuff which is very exciting. I want to try and do every genre if that’s possible. It’s going to have a lot of different flavours, which excites me, but it won’t be coming out for a while.

So, you’ve said in the past that it was the reaction to ‘Miami’ that gave you the courage to pursue music. What were your doubts at the beginning?

There were a lot of doubts. I mean, I didn’t even think I could sing for a long time, and I was too shy to sing in front of people. At the time, I was dealing with a lot of inner-battles, and so I didn’t have time to think about music. When I eventually did, it wasn’t about developing my sound or anything like that. It was just about getting out of my shell and being able to put my music out there without being shy or putting myself down all of the time. Even now, I talk myself down. But the problem at the time was that I couldn’t even bring myself to make music at all.

I guess I started to meet people who gave me confidence, in particular, my producer Elliot. My family has always been very supportive and then, of course, my fans. When I first started posting covers on Instagram, I was scared shitless, because I thought that I was going to get all of this hate. But when people started liking them, I couldn’t believe it, and now I love doing it. While I still feel that scariness, I feel like I have matured a lot.

Would you say then, that social media has helped you to break out of that shell in the sense that you didn’t have to go out and face a live audience straight away?

Yeah, I mean it’s not exactly what people want to hear, but hiding behind social media helped me in the beginning. You don’t have to face people when you post something, and as I said, when I first started, I was so scared of what people were going to think. But now I can feed off the support that I’m getting, and it’s honestly, why I keep doing what I’m doing. It makes me happy, gives me more confidence and makes me feel like what I’m doing isn’t bad because people like it. I get hate too, which is always going to happen, but it didn’t hurt me as much as I thought it would because, for me, the love outweighs the hate.

So, let’s go a little deeper — how has becoming an artist helped to change your outlook on the world?

I used to take a lot of things very seriously, and I used to be very depressed. It got to the point where I wouldn’t breathe in the hallways at school because I thought that people would think I was doing it weirdly. I was very over-concerned with what other people thought. Music has helped me comprehend that there is a ton of people who like me for who I am. I got a message recently from someone telling me about how much my music was helping them, and I couldn’t believe that something I was doing was helping someone. When you think of music, and you think of artists, you almost feel like they aren’t within reach. I remember when I covered this song by a rapper (who is sort-of famous) for my boyfriend and then he reached out to me to say how much he enjoyed it. It’s just crazy how this stuff happens. But yeah, ultimately, I learned not to take life too seriously.

So, what type of artist have you always wanted to be?

Ideally, I’d like every album to sound different. I don’t want to be one of those artists who release the same thing over and over again. I want to be evolving and trying new stuff. I want to have that passion and drive to do weird stuff, and I never want to have to write a song to appease a record label or something. I always want to be able to uphold my integrity in that sense. I’m a blunt and non-traditional person, and I hope that I never have to change that too much.

And what is it like for an up and coming artist during these strange times? Is it having an impact on the exposure you may be missing out on from live shows?

It has been weird. I write about experiences that I have day-to-day and because I haven’t been outside a lot, I haven’t been experiencing anything new. It’s something that I’ve heard a lot of artists are struggling with right now, but at the same time, a lot of them are getting a ton of inspiration. From my perspective, I’m having a hard time creatively. I’ve been doing a bunch of live streams which has been helping my nerves a lot. It means that instead of facing a live audience, I get to hide behind my computer, which I know is probably not the best thing to keep practising at the beginning of my career.

One of your most recent live streams was an appearance on the Sugarshack Sessions, which was awesome! How did that come about?

I don’t even know how that one happened. Sugarshack does a lot of coverage on local artists, and they have been showing extra support for the local scene during COVID-19. Heather and Rey – my team – have always been able to get me these incredible opportunities, so it’s down to them. I’m 18, and I’m not too sure what’s going on most of the time, so I try and stay out of the business side of things.

So, your guitar is called Oliver.

It’s my first “real” guitar (laughs), and he’s always been a bro to me. I remember someone saying to me “why do you always call it, he?” I decided to give it a name, and the first thing that popped into my head was, Oliver. He is covered in stickers now, but he’s still holding up.

Do you have a creative space at home, specifically for writing?

For me, I tend to get creative here, there and everywhere. I’m not one of those people who can sit down and be like “I’m going to write a song”. The idea for ‘Vampires Suck, which is off my new EP, came about in class. Someone said to me “I dare you to write a song about vampires” and I was like “fuck you, I’m gonna do it”. But I can never sit down and write on demand.

You listened to a lot of Bossa Nova as a kid, and the influence is there in your music. Do you think you’ll ever write an all-out Bossa Nova number in the future?

I would love to do that! I’m not trying to put myself down or anything, but I don’t think I have the technical skills to be able to do it. I would love to partner up with someone who could make it happen, though. That would be fucking nuts!

So what’s the most emotional message that you have received from a fan, and what is the weirdest?

I’ve gotten a lot of very-weird ones. I think the ones that I cherish the most are the ones where people are like “I know you’re never going to see this, but your music has helped me so much” because I know exactly how that feels. On the weirder side, I get a lot of requests from people asking me to record myself saying, “hi” or “happy birthday”, which is quite annoying. I’ve had one guy before that wouldn’t stop DMing me and asking me to do inappropriate things. I never want to have to block people, but there have been a lot of cases where people will not stop messaging until they get what they want. People will say a lot of shit to get what they want.

Here is a big question — what would you like to change in the world?

I wish that people’s political views weren’t so polarised. For example, I am not a supporter of Trump and what he stands for, and I want him out of office, but I have a friend who is a massive Republican, and a lot of people tell me that I am a garbage person for even being around someone like that. That’s the problem. If I can’t talk to him, agree to disagree and have a civilized conversation on opposing views, then we’re fucked! The whole point of a democracy is that we are all allowed different opinions. But you know, fuck Trump.

For the latest on Julia Bhatt: