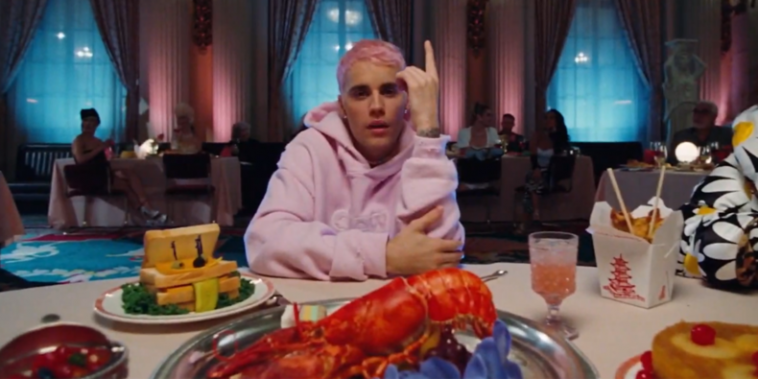 Directed by Bardia Zeinali, the visual sees a pink-haired Justin visit a restaurant. He is joined by a number of eclectic guests as they sample some of the restaurant’s finest (and strangest) delights. After they finish their feast, he and the guests continue the party by delivering some of their best moves.

Check out the music video for ‘Yummy’ below.

If one video wasn’t enough for you, Justin has also released a vertical video for ‘Yummy’ on Spotify. Check it out in all its glory right here.

An hour before the video premiered, Justin unveiled a new item of merchandise – a limited edition Yummy x Drew House t-shirt. The last remaining t-shirts can be found here – be quick, before they all go!

‘Yummy’ is taken from Justin’s forthcoming fifth studio album. Whilst the title and release date have yet to be confirmed, fans have certainly shown their excitement at the prospect of more new music from Justin, who recently declared that the record will come with an ‘R&Bieber’ sound.

At the end of the month, Justin will be launching a documentary series on YouTube titled Justin Bieber: Seasons. Starting on January 27, new episodes will be released on Mondays and Wednesdays. The artist has also announced a huge tour across the US which will kick off in Seattle on May 14.

What are your thoughts on the ‘Yummy’ music video? Are you excited for a Justin Bieber filled 2020? Let us know on Twitter @CelebMix