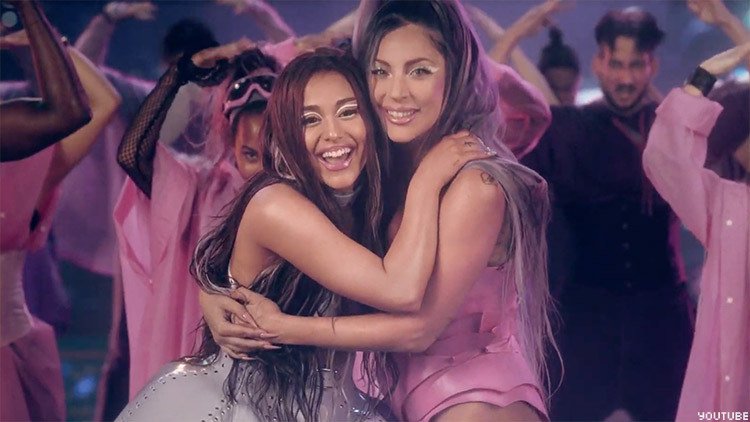 Lady Gaga and Ariana Grande’s highly anticipated collaboration ‘Rain on Me’ is here and it has blown our minds.

Delivering pop perfection, ‘Rain On Me’ sees two of music’s finest come together to unveil a triumphant anthem which is incredibly empowering. It’s no secret that both Gaga and Ariana have faced plenty of hardships in life, but this song represents their super-human strength.

‘Rain On Me’ is an uplifting bop which reminds us that even during our darkest hour, that we can keep going and keep fighting. The track references persevering through your troubles and is a celebration of all the tears shed, however, Gaga also stated that the rain in the song doubles up as a metaphor for the alcohol she’s consumed to numb her pain.

Speaking about the song with Zane Lowe on Apple Music, Lady Gaga said: “The lyrics that I wrote right here in this studio, “I’d rather be dry, but at least I’m alive. Rain on me.” This is about an analog of tears being the rain. And you know what it’s also a metaphor for, is the amount of drinking that I was doing to numb myself. I’d rather be dry. I’d rather not be drinking, but I haven’t died yet. I’m still alive. Rain on me. Okay, I’m going to keep on drinking. This song has many layers.”

‘The euphoric song comes with a sensational rain-filled and dance heavy music video. Directed by Robert Rodriguez, the visual sees Lady Gaga, Ariana and a group of dancers in intergalactic inspired latex and PVC outfits as they battle rain and daggers falling from the sky. The pair serve some incredible looks, including the moment which caused us to do a double take as Gaga sports Ariana’s trademark ponytail whilst Ari has her hair down.

Check out the iconic visual below.

‘Rain On Me’ is taken from Lady Gaga’s forthcoming sixth studio album Chromatica, which is due for release on May 29. The track follows on from the album’s lead single ‘Stupid Love’.

This is Ariana’s second collaboration of late, with the singer recently teaming up with Justin Bieber to release ‘Stuck With U’. The track debuted at number one on the Billboard Hot 100 chart, marking her third chart topper.

What do you think of ‘Rain On Me’? Share your thoughts on Lady Gaga and Ariana Grande’s collaboration on Twitter @CelebMix