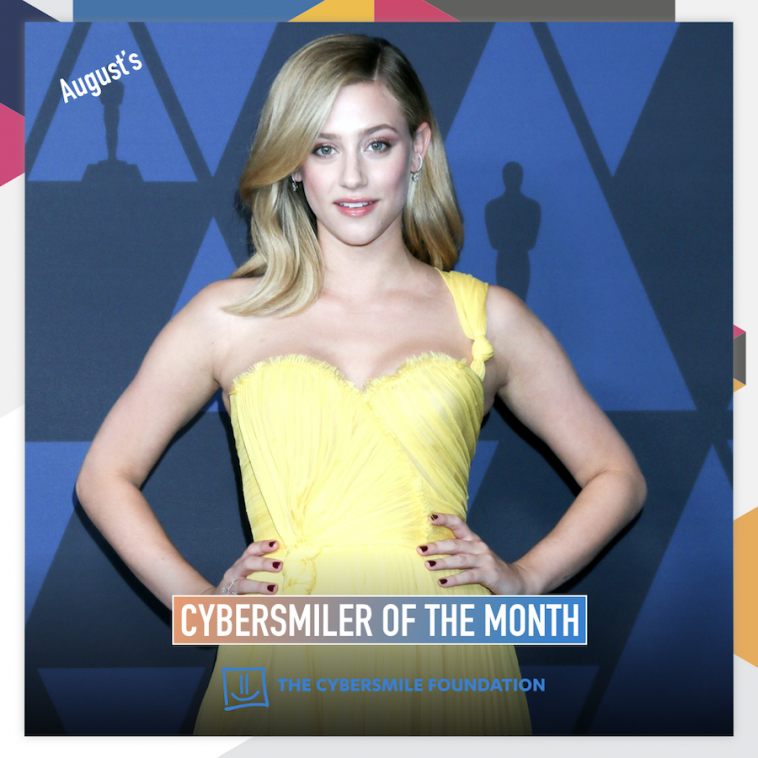 Our friends over at Cybersmile, a leading cyberbullying organisation have announced Lili Reinhart is their Cybersmiler of the Month for August.

Lili who has appeared in some of the most popular TV shows in recent years including Riverdale, recently took to social media to speak out about her own experiences with mental health, depression, anxiety and cyberbullying.

She did an extremely candid interview with Refinery29. Where she spoke about her personal struggle with depression. She opened up with some exceedingly personal statements about her experience, which were misconstrued as quotes about the break up of a personal relationship, so she addressed it on Twitter.

Lili opened up in the hope that by sharing her own story, she will empower and inspire people to talk more openly about their own mental wellbeing.

As well as speaking out about her own personal experiences with mental health and cyberbullying, Lili has also called out for more mental health-related education in schools.

“WE TALK ABOUT PHYSICAL EDUCATION IN SCHOOL BUT WE DON’T TALK ABOUT MENTAL HEALTH AND IT’S SOMETHING THAT’S SO RELEVANT AND IMPORTANT – IT SHOULD BE TAUGHT IN EVERY SCHOOL, IN EVERY HEALTH CLASS. OFTENTIMES IT CAN BE THE MOST IMPORTANT ASPECT OF YOUR LIFE, YOUR OUTLOOK AND HOW YOU PROCESS THINGS. SO, IT’S IMPORTANT FOR ME TO TALK ABOUT IT, TO HOPEFULLY ENCOURAGE PEOPLE TO NORMALISE THE CONVERSATION ABOUT MENTAL HEALTH, TO MAKE IT NOT SUCH A TABOO CONCEPT OR SUCH A WEIRD THING TO TALK ABOUT. I THINK IT’S A VERY HUMAN THING, AND IT SHOULD BE TREATED AS SUCH.”

Lili joins Lady Gaga, John Legend and Jesy Nelson in being awarded a Cybersmiler of the Month award. Every recipient has in some way used their platform to help others and combat cyberbullying or speaking up about their own struggles with mental health to inspire others and just make the world we live in a much kinder and compassionate place.

You can find out more about Cybersmile here.