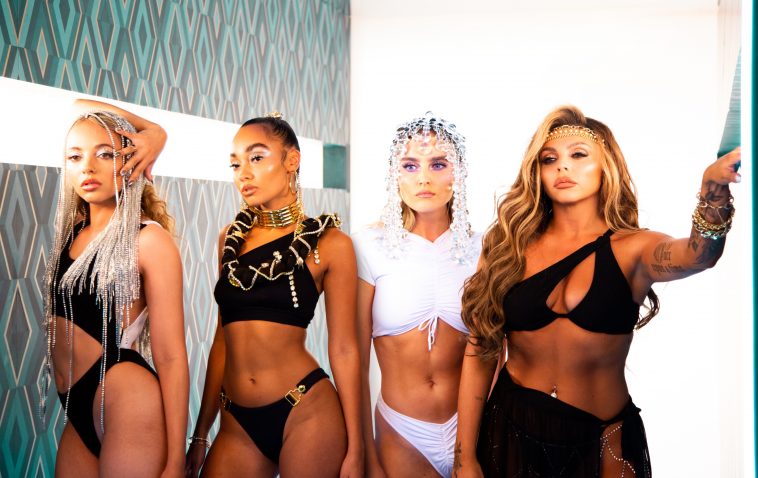 Little Mix will be dropping the music video for their latest single ‘Holiday’ tomorrow (August 28), and ahead of its release, a series of stunning photos have been unveiled.

Serving some sensational looks, Leigh-Anne, Jesy, Jade and Perrie are absolutely glowing in these pictures and it only makes us more excited to see the visual when it drops at 10am. The confidence and glamour from these queens is just unreal. We. Are. Not. Worthy.

Little Mix announced the release date for the ‘Holiday’ visual earlier this week with a gorgeous teaser which has caused an incredible amount of excitement amongst their Mixers.

The girls confirmed last month that a music video for ‘Holiday’ had been filmed. Speaking to Capital FM’s Jimmy Hill, Perrie explained how they filmed the visual whilst social distancing due to the COVID-19 pandemic.

“We had to stay far away from each other, and they are going to somehow super-impose it. So we were together, but we were distanced, so it’s so clever how they’ve done it, and we saw an edit yesterday and we gagged. It’s insane.”

‘Holiday’ was released last month and was followed by an official remix from frequent collaborator MNEK. Currently climbing the UK top 20, ‘Holiday’ has already amassed over 20 million streams and will no doubt continue to rise following the release of the official music video.

Are you excited for the ‘Holiday’ visual? Let us know your thoughts on these stunning Little Mix pictures and their forthcoming video on Twitter @CelebMix