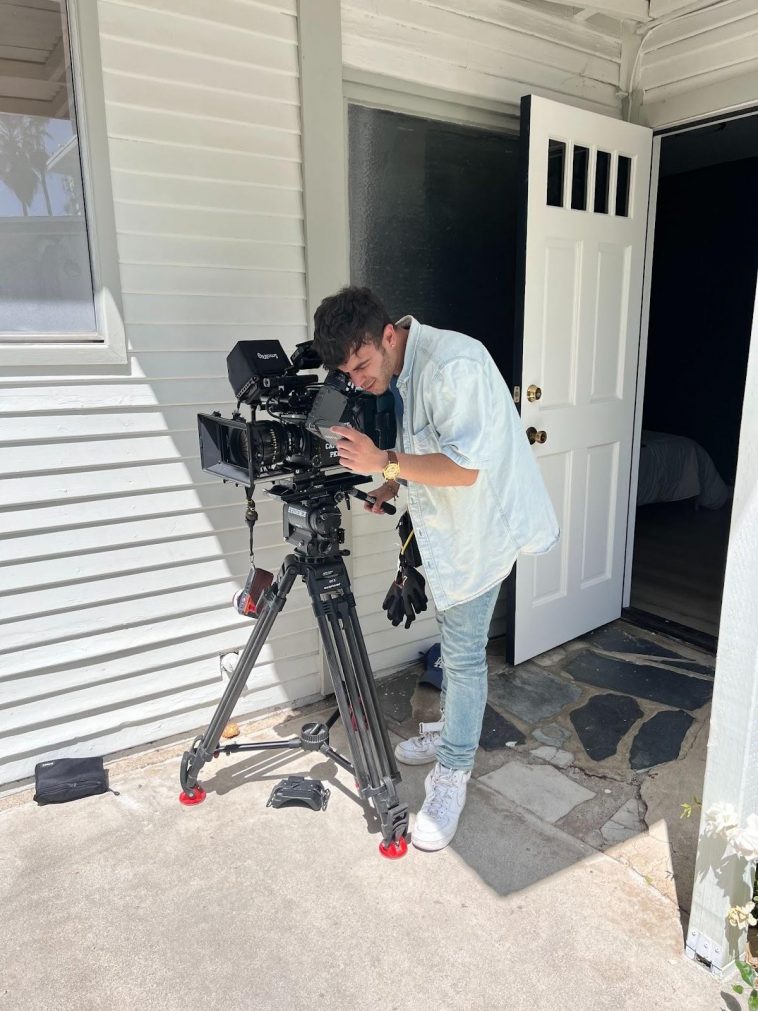 My motto at work is always “every frame is important”. When I’m on the set I always try to pay the slightest attention to any detail, from the continuity of a glass to the glasses on the table. In short, anything that is represented in the frame must be representative and aesthetic.

On the set I am interested in the correct communication and that everything is done safely, as we say here “safety first”. When making a movie, it is like being part of a big family. We all give our best during the shooting – we have to motivate each other and work as a team. No matter what role you play in the crew, if you are the director, an actor, the electrician or the make-up employee, everyone is fundamental to the set and everyone with their work adds something to the project. I don’t believe in hierarchies, for me it doesn’t matter, I always try to have a friendly but always professional relationship. I think the key is having fun on your job – and I can assure you! After I had 12 hours on set, working with the company seemed to have only been a minute.

Cinematography is a very technical work, which requires a lot of precision and method to achieve certain effects. As you said “every frame is important” – as this technical aspect of your work can be reconciled with the artistic part of cinema.

The film industry is certainly a very technical sector and requires a lot of precision. As we said before, in this work everything is important and must make sense. For example, in a scene shot at night that presents many contrasts with the lights, we imagine a red shade that stands like the actor’s backlight, it serves to connect to the lights of the lights and brakes of the passing machines.

The games of light are used precisely to represent and transmit something: they must not be only aesthetic or “for beauty”, but they serve above all to convey emotions and feelings – and in this aspect also lies the artistic part of my work.

All the biggest big movie theaters tell about a master, or a person who has changed their way of seeing their work forever, as advice or experience. During the projects you followed, both in Italy and in the USA, did you meet people who changed the way you saw cinematography?

We can say that since I started making videos, I have had the opportunity to meet many people, collaborated with many video makers and artists such as singers, designers, visual effects, directors and cinematographers. Between Italy and Los Angeles I had the opportunity to learn from many people and collaborated with young talents. One of these was definitely Ludovico Canali De Rossi, who thanks to him I started working as a freelance video maker. When I started making videos with him I only had a very cheap machine, I still had that tremoline that didn’t allow me to stay with the stabilized camera. With Ludovico I

learned a lot about how to organize videos, think about original stories, which lenses to use and the right settings – as well as excellent professionalism.

I believe that Ludovico Canali De Rossi’s talent is something indescribable, yet hundreds of video music commercials every month and is really a war machine. When we work together, we share the desire to do better – no matter what budget we had available, the goal was to make better videos than previous ones from the point of view of history, lights, machine movements or assembly.

The second person is Mario Orazio Ruvio. I met him here in Los Angeles and in three years of collaboration we have realized many projects. We were always operational, but a pandemic in the middle of the path where everything had stopped. We always try to do something new, test ourselves and create exciting audiovisual products without budget, with only our equipment we bought ourselves. Together we have participated in many festival films, including the 48h Film Festival where we co-directed the whole story and the Best Short Film Dream-Machine, where we won the Best Short Film Award for the Dream Machine International Film Festival 2021.

In addition, Mario, being mainly an actor – has studied at several schools in the UK and the American Academy Dramatic Art in LA for many years – has incredible skills in leading the actors. He always knows how to give the right indications for triggering emotion, has excellent communication with the actors for advice in representing and interpreting situations or feelings.

You’re talking to us about a lot of projects! Tell us something more, you will certainly have some of them to whom you are bound in particular.

Of course! The projects that I carry in my heart are those realized entirely by me, where I could put everything myself in it. Having worked a lot for other artists and projects I never had the opportunity to spend time on my projects and create something of mine. Currently, my webseries made with Mario Orazio Ruvio is in production, of which we have written 10 scripts with a total of 10 episodes, of which we have shot the pilot that is still in the editing phase. This was certainly one of the projects that I liked most because? and? I liked because? and? something of mine, even having collaborated with Mario. Between us there is a lot of tune, we found ourselves on the same waveline and we worked very well by turning the rider.

I can never forget the 48h Film Festival, an experience where we have grouped a group of artists who give up 48 hours of sleep to create everything from nothing. Some projects take months for the realization, but the Festival imposes a limit of 48 hours to finish the short film – and that’s the challenge! I love to surround myself with people like me: mad people who give up 48 hours of sleep to create something that eventually is? of all those who participated, from make-up artists, to the one who weaves clothes, to the actor or video editor.

Last question. It is said that behind every great artist there is another great artist who has always inspired him. Who is the director, or cinematographer, who you would like to collaborate with someday?

The director with whom I aspire to work one day is obviously Quentin Tarantino. I admire him both as a person and as a professional. I love his way of making cinema, from his shots to how he acts on the set. He is a fantastic person, treats everyone with kindness and friendliness. Making movies is his favorite game – when he is playing on the set, he has this way of doing it I feel very similar to me. Movies like Pulp Fiction, Jackie Brown and Kill Bill never stopped inspiring me. I feel that I have learned from him the characteristic that every film has its own palette color that reflects the characters – for example in Kill Bill there’s yellow and black that predominate: colors that reflect very well the characteristics of the character. I am always amazed by the music that he chooses to insert. I know he is a western lover, and I think every time about the soundtracks of our unforgettable Ennio Morricone.

As for cinematographer, Roger Deakins is a true master. It has a very natural style of photography, has the ability to not add lights and can exploit sunlight – a way of working that reflects me a lot. His mastery is revealed in the 1917 film – imagines the difficulty in hiding all the lights they used while the camera is always moving and turning around. Like him there are few, he always manages to make the impossible, whatever possible.