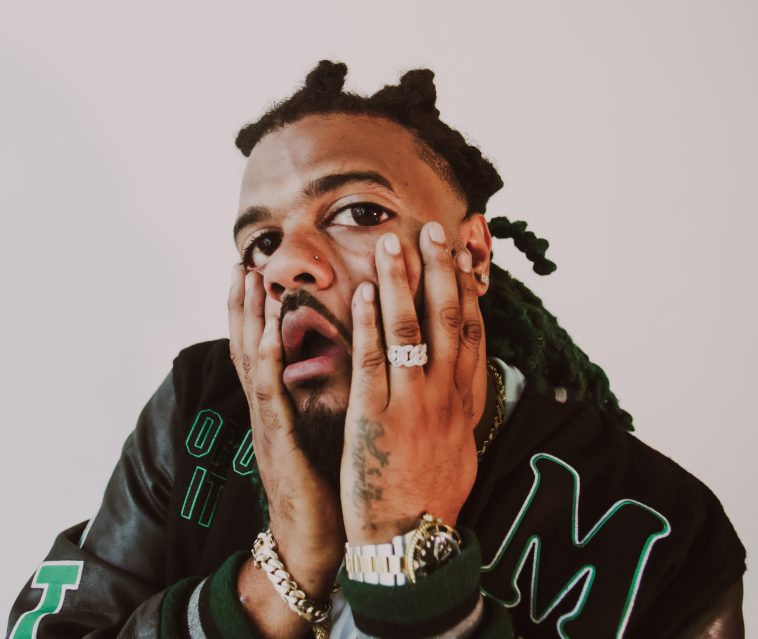 Released today is the highly-relatable EP, titled “GANGOSO WORLD”, by Moreno ITF. The EP is the amalgamation of Latin drill, showcasing the brilliant artistry of Moreno ITF, his deep connection with his music as well as the open-door honesty he has with his fans. This follows up the second single from this EP, titled “RUFF”.

Moreno ITF, real name Braulino Ciprian, is a Dominican-born, Bronx-bred rapper and Latin drill artist, with the “ITF” in his name deriving from the word “Interface” suggesting his relationship with both his music and his fans. As a self-starter, he continues to build a diehard following through his music, fashion, and live performances. His ability to take inspiration from the New York drill scene and add his own Latin flair to it, while creating deep meaningful lyrics from the sacrifice, hustle, and entertainment that life has to offer, really allows him to inspire many people around the world, that dreams really can come true, no matter what. He incorporates all that into his music, fashion, art, film, and overall visual mediums in the hope to influence universal expression in a variety of ways. His music has already had an impact, with him reaching over 20,000 monthly listeners on Spotify, with his collaboration with Yung Sarria and Kidd Keo on the track “BRONX” being his most-streamed Spotify track, with almost half a million streams. Moreno ITF is an incredible rising artist who continues to make a statement with his music as well as send out influential vibes to truly show that you can make it.

Talking about the EP, Moreno ITF said: “A lot of people in this world are in love with the spice of Latin culture and the energy of New York City. Because I grew up between the Dominican Republic and the Bronx, I can connect with them in this sense, whether it’s through my lyricism, the energy I bring to a track or my presence. My music is a direct result of the cultures that raised me, and Gangoso is a true representation of my world and its flavors. It’s a movement, it’s a lifestyle; it’s everything from the way you dress, the way you act, and the way you hustle to keep food on the table for your family… my music is an interface for those who can relate to any parts of my identity.”

The EP starts off with “ROBOCOP”, introducing us to Moreno ITF with rhythmic beats behind a hard-hitting drill rap that fully showcases the impressive bars and creative lyrics. It is followed by “BERKIN” which flips the theme tonally before jumping more towards an upbeat party anthemic vibe, with an unforgettable hook that matches the rhythm, all the while Moreno ITF impresses lyrically with the Spanish and English fusion which delves deeply into the “gangoso” lifestyle (a self-created term meaning to have “a dope clean car, supporting your family, and winning in life”, according to Moreno ITF, himself), whilst also exploring his reality of hustling to survive through a positive lens.

The third track on the EP, and the focus track, is “PULL UP” which is a hardstyle drill with African and Jamaican influences and an undeniable dance-inspired beat that only emphasises the lyrical content of Moreno ITF’s drill rap of late nights in the club. The official second single, “RUFF”, follows up next, which recounts his own gangster love story and the difficulties in maintaining a relationship whilst hustling; his Spanish-English flip bars bring an unstoppable erotic flavour to the table, whilst the production of the backing track warps around the rap, highlighting Moreno ITF’s lyrics and vibe, whilst delivering a more R&B style. The EP ends with the track “COBAIN” – which is inspired by Rich Boy’s 2000s hit “Throw Some D’s”, which features Polow da Don – delves deeply into New York freestyle where Moreno ITF raps over a subtler more gentle beat that hits differently than the rest of the EP with added drums which can be heard coinciding with his drill rap chorus which filters out at the end leaving the rhythmic hip hop drums that are set to leave a lasting impression.

“GANGOSO WORLD”, by Moreno ITF, is available to download and stream, across all platforms, right now, via Good Partners.

Let us know what you make of “GANGOSO WORLD” by Moreno ITF on Twitter @CelebMix.