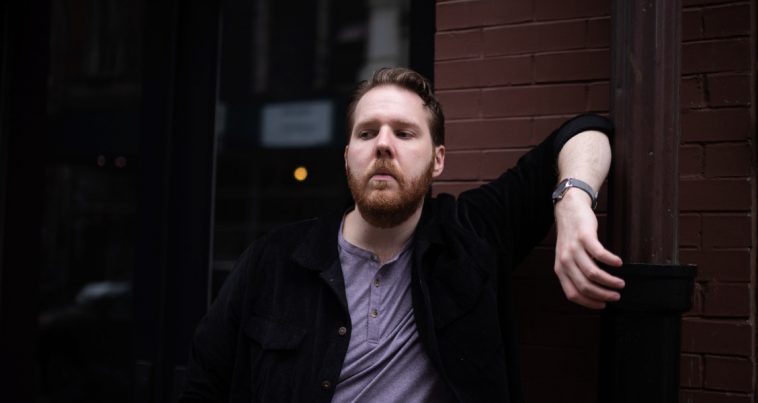 Brooklyn-based folk-pop singer-songwriter The Eight Six Seas, aka Nick Stevens, releases “The Insomniac’s Lament,” a track lifted from his forthcoming debut EP, This is Just a Simple Song, slated to drop on July 8.

The EP provides a view for anyone looking out from inside the mirror at the peculiar and unexpected world we now live in, recognizable yet simultaneously unfamiliar.

After living in Boston for seven years, Nick relocated to Brooklyn, where a fantastic new array of musical sounds and styles opened before him, including baroque pop and electronica.

In this salmagundi of sound, Nick discovered the means of evolving his folk music, blending classic folk structures with fundamentally different styles.

Nick explains, “When I moved to Brooklyn, I finally found the confidence to record these songs and get them out into the world.”

Thus, The Eighty Six Seas took shape – an homage to the 1986 Boston Celtics, commonly referred to as ‘the 86 C’s.’

Nick performs with a number of collaborators but often and astonishingly recreates the soundscapes via his guitar, synth, and loop pedals. The urge to experiment with different iterations of his material has only grown in time.

According to Stevens, “I try to do things that will surprise myself and the audience.”

Nick’s high tenor imbues the lyrics with vibrant, creamy timbres, giving the song alluring sonic textures. It’s a wonderful voice, radiating a charismatic quality created by phrasing, inflection, and tonal nuance. The result is not only pleasing to listeners’ ears but at once soothing and mesmerizing.

The Eighty Six Seas has it going on! “The Insomniac’s Lament” ripples with yummy leitmotifs as the appealing vocals of Nick Stevens add the icing to the cake.