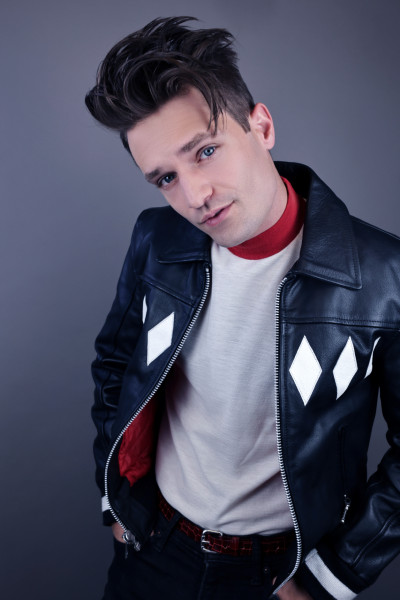 It’s no wonder that he’ll soon be performing “Nobody” on The Kelly Clarkson Show: it’s exactly the sort of brilliantly written, immediately accessible pop-rock song that Clarkson regularly took to the top of the charts in the mid-’00s.

While learning piano he added classical violin. In middle school, he played drums and sang in a punk/screamo band, guitar in a rock band, and fiddle in the bluegrass/gospel band The Circuit Riders. At the same time, AJ was programming and selling games to friends for their calculators. He’s a tech-wiz.

In high school, he was a Young Associate Violinist to the National Symphony Orchestra and an Engineer and Infrared Systems Developer for the U.S. Naval Research Laboratory. Later, deciding to pursue music, he rejected numerous scholarship offers from universities with elite engineering programs. While studying music at New York University, he was mentored by Glenn Frey and Phil Galdston.

Next, AJ released his EP, Dragons in the Sky, had a number three hit in Australia, opened for The Eagles at the Beacon Theatre, performed in the off-Broadway and West End hit Close to You: Burt Bacharach Reimagined, learned some more instruments (he plays 10 now), and graduated with one of America’s first master’s degrees in songwriting.

AJ has collaborated with Grammy-winning producer Scott Jacoby and shared the stage with Lindsey Stirling and Emily Kinney, as well as performing at Milwaukee Summerfest and Bethlehem MusikFest.

“Nobody” opens on retro flavors topped by AJ’s jaded vocals, and then ramps up to sparkling washes of baroque pop coloration as AJ’s deluxe voice imbues the lyrics with delicious timbres. Brass accents give the chorus bright savors, adding to the song’s alluring harmonics. Vogueish harmonies imbue the song with glowing depth and dimension.

The combination of the fashionable visuals and the modern pop flavors gives “Nobody” a wonderful juxtaposition of images and sound.