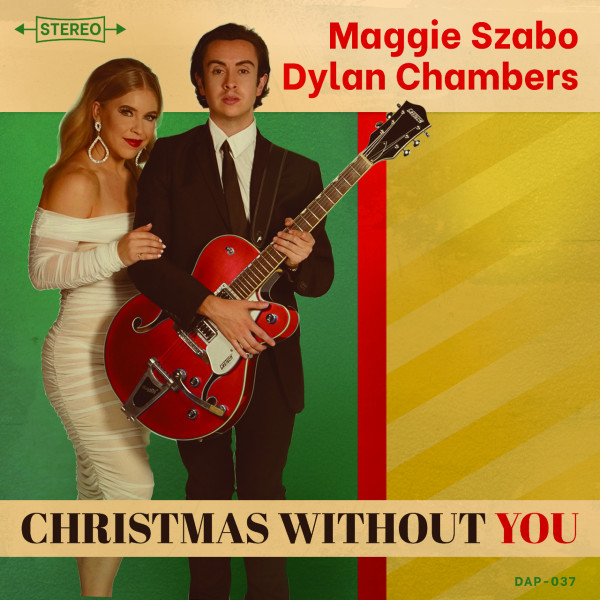 Los Angeles-based pop singer-songwriter Maggie Szabo joins forces with Dylan Chambers to introduce the music video for “Christmas Without You.”

As one of pop’s go-to artists, Maggie is in demand by DJ/producers and network placements on E!, Disney, NBC, and Netflix, as well as features on The Advocate, Billboard, Popdust, Huffington Post, Ryan Seacrest, Perez Hilton, and EARMILK.

An ardent advocate of social justice, Maggie works with organizations such as the Trans Chorus of Los Angeles and donates proceeds from her song, “Don’t Give Up,” to homeless LGBTQIA+ youth.

“Christmas Without You” opens on an elegant piano accompanied by a lustrous guitar. Maggie’s crème de la crème voice begins the song, imbuing the lyrics with lush, evocative textures. Dylan’s husky tenor adds passionate savors, and when the two voices blend in harmony the result is sublime.

Crunching, potent drums, and a cavernous bassline give the song a luscious rhythm, shimmering with creamy, dazzling holiday leitmotifs. Maggie and Dylan transport their audience into a hopeful and uplifting Christmas scene with their eloquently honest lyrics, and a brand-new, old-school vibe.

The video, directed by Scott Lehman, depicts Maggie in a beautiful white dress, while Dylan wears a dark coat and tie, playing a gorgeous blue guitar. An iridescent backdrop injects the visuals with glistening lights.

On “Christmas Without You,” Maggie Szabo and Dylan Chambers revel in the warm intimacy of everyone’s favorite holiday season.