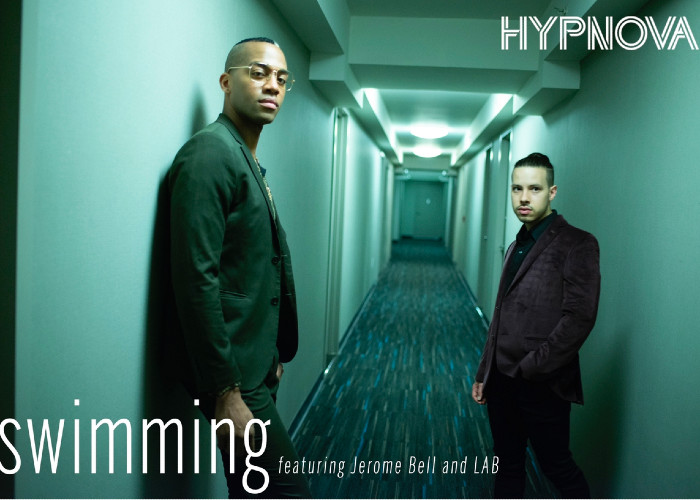 Hypnova, aka Rozhan Razman, and Jonny Hirsch team up with Jerome Bell and LAB to deliver “Swimming.”

“It’s like we’ve been preparing for this for a couple years ever since Rozhan moved to Malaysia,” says Jonny. “We used to schedule online recording sessions, while he was still in Brooklyn. We’d go back and forth between both of us being in the actual recording studio to then doing a session separated in our homes, using this new system. It was weird and a bit uncomfortable at first, but then it just started working!”

Hypnova and Jonny Hirsch first got together in NYC, while performing in the city. Later, they began collaborating on music at RiRo Music Recording Studio. Even though the two are now living in far-flung locations, Hirsch in New Rochell, NY, and Hypnova in Kuala Lumpur, Malaysia, the two artists managed to record, edit, mix, and master the new song.

“Swimming,” originally written by LAB, was resuscitated by Hypnova and LAB, maintaining LAB’s original rapping delivery on the second verse.

For lead vocals on “Swimming,” Hypnova wanted Jerome Bell, whose work with One Up Duo, Disco Nights, and Party Rock, along with appearances on American Idol and The Voice, have made him the go-to singer.

Booking studio time with engineer Eli Menezes to lay down the vocal tracks, Jonny then asked Stuart Mack (trumpet, flugelhorn) to come in and add dimension and depth to the song. Once that was done, the tracks were sent to Hypnova, where he prepared them for online sessions.

Plush with low-slung sensuality and swanky coloration, “Swimming” hits the sweet spot sonically and because of the velvety voice of Jerome Bell.

Let us know what you think of “Swimming” @CelebMix.