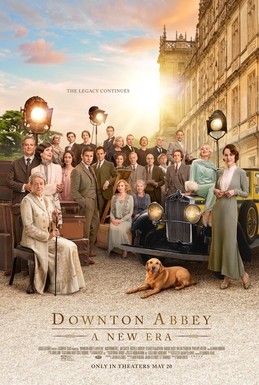 All our favourites are back in the beautiful new Dowton Abbey: A New Era movie.

From award-winning creator, Julian Fellowes DOWNTON ABBEY: A NEW ERA. The much-anticipated cinematic return of the global phenomenon reunites the beloved cast as they go on a grand journey to the South of France to uncover the mystery of the Dowager Countess’ newly inherited villa.

As ever with Downton it makes you laugh, cry and smile. At the heart Downton Abbey has always been something that is feel good while touching on serious issues and capturing your heart, A New Era is no different.

It showcases many beloved characters seemingly getting their happy afters including Barrow who has through the TV series and the first movie had a pretty horrid time due to the stigma surrounding same-sex relationships in the time period. But in this movie, we see him finally get some happiness.

We see the both upstairs and downstairs members of the house are swept away by the grandeur of Hollywood as a silent movie comes to film at the house. The silent movie becomes a talking one, with a little help from Mosley, Lady Mary and some of the staff. Signalling the start of a new era in filmmaking.

There is also a sad aspect to the movie one that long time Downton fans will know has been coming for a while and one which was heavily hinted at in the previous film. It will have you reaching for the tissues as the movie says a moving goodbye to one of Downton’s most loved characters.

All in all Downton Abbey: A New Era is a lovely movie that will take you on a rollercoaster of emotions!

Let us know what you think of the new movie on @CelebMix!