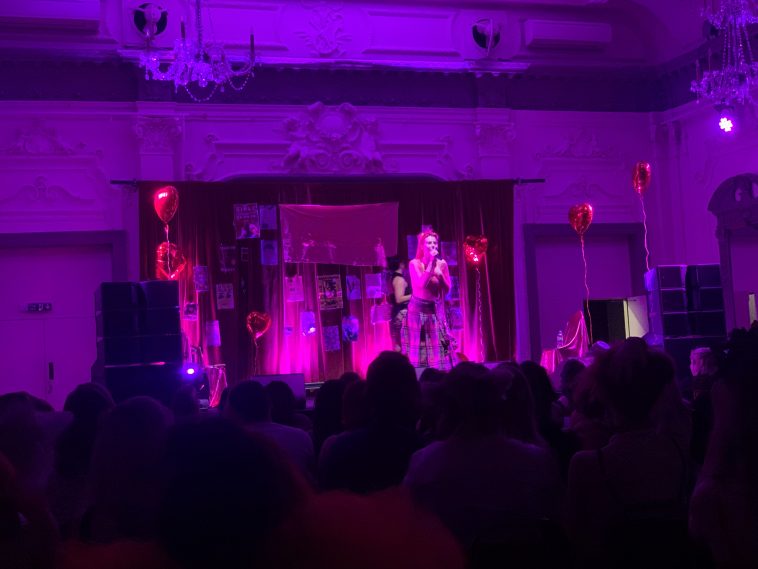 The first time GIRLI turns to face a sold-out Bush Hall crowd is as she chants, “I know the day, and the month, and the second.”

Released in 2018, ‘Day Month Second’ doubled as a fuming break-up track and a confident introduction to what GIRLI at the time called ‘GIRLI 2.0’.

That era saw the pink-haired pop star snapped up by a major record label as she released her bold debut album, Odd One Out.

That record label venture ultimately crashed and burned, a fact GIRLI is candid about at Bush Hall on Friday night.

As she opens on ‘Day Month Second’, you’d be forgiven for hearing her warning sneer of “you f**cked up” as a missile aimed at a music industry that kicked her to the kerb in 2019 – she moves swiftly into tongue-in-cheek 2020 comeback track ‘Has Been‘ to prove that point.

However, if there’s one thing the long-term GIRLI fans seated in Bush Hall know, it’s that she’s an artist who thrives on frustration. This is, after all, the singer who burst onto the scene as an angsty teen with ‘So You Think You Can F**k With Me, Do Ya?’ and ‘Girls Get Angry Too’.

That record label heartbreak birthed the current GIRLI 3.0 era and the 23-year-old is thriving on the chance to be independent again and call all the shots – “I’m in control of my own music and it feels so good,” she rallies at the end of the night before euphoric single ‘More Than A Friend’.

GIRLI’s excitement at new material is palpable in Bush Hall. She delivers a touching monologue about body confidence before latest single ‘Dysmorphia’ and takes the time to explain unreleased track ‘I Hate Myself’ so fans know exactly where she’s coming from.

Elsewhere, newer material ‘Letter To My Ex’ and ‘Throw Myself Away’ come alive as they are performed in front of a live audience for the first time.

What makes this first public sighting of GIRLI 3.0 so potent at Bush Hall however, is how she embraces the journey that has led her here.

Whatever bad feelings may reside around Odd One Out are soon blasted away by the anthemic ‘Deal With It’ and as she performs an unrehearsed encore of ‘Pink’, it’s clear her fanbase couldn’t give two hoots about that record deal either, it’s just GIRLI they want. And on Friday night, the star makes it crystal clear she is here to stay.

Are you a GIRLI fan? Did you love her Bush Hall comeback show? Let us know @CelebMix on Twitter.