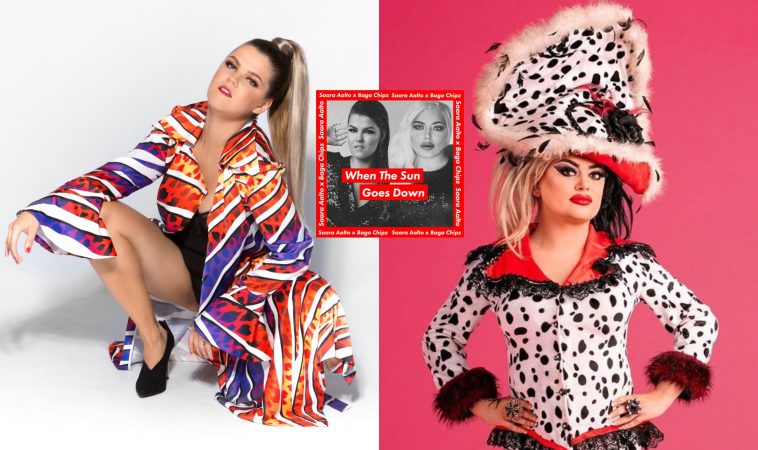 Queens collaborating with queens, now this is what we’re talking about; Finnish superstar, Saara Aalto, has teamed up with top UK drag queen, Baga Chipz, for the addicting new single “When The Sun Goes Down”. This marks Baga Chipz debut single release following from the Frock Destroyers’ single “Break Up (Bye Bye)” and her feature as part of the top three of RuPaul’s Drag Race UK on RuPaul’s track “To The Moon”, and follows up Saara Aalto’s seventh studio album Fairytale: Joulun taikaa.

Saara Aalto is a Finnish singer-songwriter who is mostly known for her TV talent show appearances. Her determination and her perseverance are a total inspiration to all. She started off placing in the top three of the first series of Talent Suomi (Finnish version of the Got Talent franchise) in 2007, then attempted to represent Finland at Eurovision in 2011 placing second, and then in 2012 she was a contestant on season one of The Voice of Finland where she reached the finale and came second. Fast forward to February 2016 where she attempted to represent Finland at Eurovision again through national selection show Uuden Musiikin Kilpailu where she came second again, then a few months later she made it to the UK and competed on the 13th series of The X Factor where she also came second. Her success in The X Factor UK led to her being internally selected by Finland to represent them at the Eurovision Song Contest 2018 with the song “Monsters“, becoming the only Finnish representative to reach the Final in the last five years, where she placed 25th. She next appeared on Dancing On Ice in the UK coming in third place. She’s released quite a lot of music over the years, and recently founded her own record label, No Fear Music. We’re excited to see what the future brings this tenacious and aspiring international star!

As for Baga Chipz, real name Leo Loren, she’s launched into fame recently after appearing on the first season of RuPaul’s Drag Race UK, where she came third. On the show, she showed off her impressive vocals and currently features on two tracks from the show, the Frock Destroyers’ version of “Break Up (Bye Bye)” and RuPaul’s “Moon Girl”, the former of which charted in the UK on the Official Singles Chart at number 35. She continues to rise as a star as she competed on the 2020 series of Celebrity MasterChef and is set to compete on the first season of Celebrity Karaoke Club on ITV2 alongside international drag queen superstar Courtney Act – which airs on 23 September 2020. We hope that more music is on its way from Baga Chipz as her voice is superb.

According to Spotify, the song has been written by Charles Rivington, Frankie Connolly, George Tizzard, James Birt, Kalvin Ryder, Nadine Samuels, Rick Parkhouse, and Saara Aalto, whilst No Fear Music record label website states that it has been produced by Red Triangle & James Brit.

Vocally amazing, both Saara Aalto and Baga Chipz impress on this track, “When The Sun Goes Down”. It’s very addicting with lyrics that you can not only just relate to but feel from deep within. We’ve been singing along to this for the last couple of days, and it certainly deserves to be a hit. The lyrics are all about wanting a lover to stick around and love them in the morning and for who they are, not just love them for a night. Addicting to no end, this is a sure-fire track that even includes a brilliant rap verse from Baga Chipz. What more could we ask for? This awesome duo brings it throughout and we can only hope that remixes and a music video are dropped for the song at a later date.

“When The Sun Goes Down”, by Saara Aalto & Baga Chipz, is available to download and stream right now, via No Fear Music, distributed by Playground Music.

What do you make of Saara Aalto and Baga Chipz’s collaboration on the track “When The Sun Goes Down”? Let us know on Twitter @CelebMix.