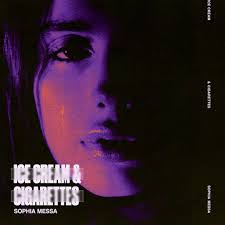 Ice Cream & Cigarettes. is the first and also the title track to be taken from Sophia’s upcoming debut EP which will be released later this year.

The EP is executive produced by Jenna Andrews, and features collaborations with Pink Sweat$, Ian Kirkpatrick and Ali Tamposi, among others.

Discussing the song Sophia says: Ice Cream & Cigarettes was written at a time in my life when I was trying to distance myself from someone close to me. It was hard for me to separate from this person because they would bring me a temporary feeling of happiness. I knew the feeling would run out and it was slowly killing me, but I was addicted to the happiness I felt when this person was around.”

Talking about making the video during quarantine Sophia said: “Making a music video during quarantine in the middle of a global pandemic was definitely way different than my past experiences to say the least! I honestly enjoyed it a lot more than having a ton of people on set. It felt a lot more free to create with just one person. The director shot the whole thing himself. We had to stay six feet apart so I wasn’t able to look at all the shots like I usually would be able to, but I really trusted the director and our vision. We just had fun with it.”

Let us know what you think of the track over on @CelebMix!