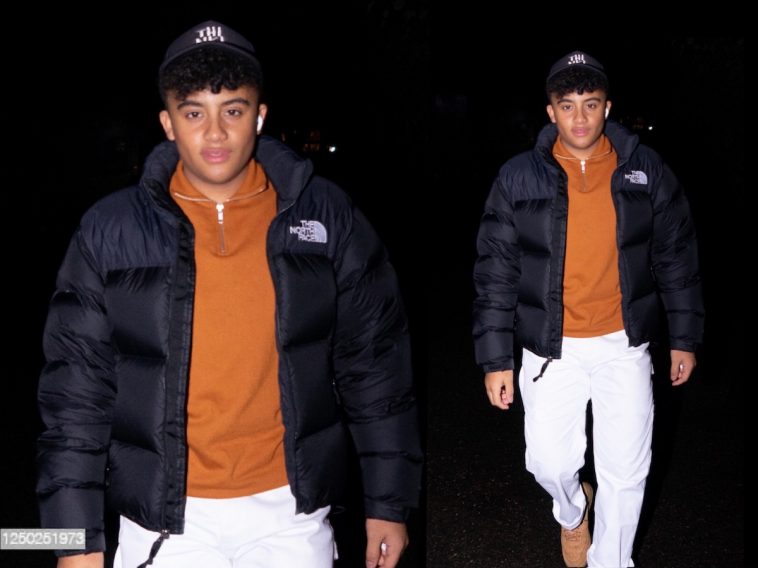 Sterling Chandler has got his work-life balance down pat, as he bags a high-profile campaign for GQ Magazine.

Sterling’s photography has been included in the GQ Men of The Year Awards virtual ceremony, as well as published in the January/February 2021 issue of British GQ Magazine.

Aged only 16 at the time of the shoot, Sterling is the youngest photographer to have his work featured in GQ Awards stars.

Patrick Hutchinson was presented the GQ Men of The Year ‘Humanitarian Award’ after he was photographed holding a counter-protester on his shoulder to keep him safe from harm during this summer’s Black Lives Matter rallies in London. His actions made front-page news around the world and showed a glimmer of hope in the equality campaign.

Sterling is a 17-year-old photographer from London. He has worked with musicians from The Specials to Che Lingo and already has had his work featured in publications such as The Independent, BBC News, Dazed & GQ Magazine.

As well as this, Sterling has expertise in digital marketing, with clients ranging from Universal Music Group artists to global brands and has been recognised for his artistic vision that brings a nuance to the projects he gets involved with. During the first lockdown, Sterling ran the social media for a music initiative called Love Record Stores run by PIAS. The Love Record Stores initiative has generated over £1M in revenue for UK record shops, reports Music Business Worldwide.

How Sterling got into photography.

“I started off experimenting taking photos with an old iPhone I was given, and my mum and dad encouraged me to pursue it after seeing some things I’d done, and it just grew from there. Then a few years ago, family friend photographer Lawrence Watson saw some of my pictures and was very encouraging, and since then I continued exploring it, investing time and energy. I saved up and bought my first camera last year.”

Sterling is also an ambassador for People Dem Collective which champions engagement and inclusion for Black, Brown and Diaspora communities – especially in the media world. He became involved with GQ after Margate-based director Tom Dream and People Dem Collective spotted some of his amazing work, including images of The Specials from their gig in Margate in May 2019.

“I’m very pleased to be a People Dem Collective ambassador. It’s fantastic because it brings you into contact with professionals from all the creative industries. Just to have the experience of spending time and working with them is enlightening and informative and has helped me to grow.”

“It’s exciting PDC have set up here in the UK and the collaborative opportunities and experiences they are opening up for young talent, particularly for under-represented black talent and young people is extremely valuable.”

Recently Sterling Chandler was the assistant director and behind-the-scenes photographer for a mini film series for Dazed Magazine and Gucci.

The film, named Knotted Gold, was directed by Tom Dream and features British singer and poet Arlo Parks. It is part of Absolute Beginners, a short film series that sees nine creative talents do something they’ve never done before – get in the director’s seat.

Celebrities such as Lynval Golding, Tallia Storm (who is starring in the new The Real Housewives of Jersey on ITVBE with her mum Tessa Hartmann) as well as Arlo Parks & Whinnie Williams congratulated Sterling on his recent work.

And there will be more from Sterling soon with some ‘exciting projects’ lined up for 2021. You can follow Sterling Chandler on Instagram here: @SterlingChandler