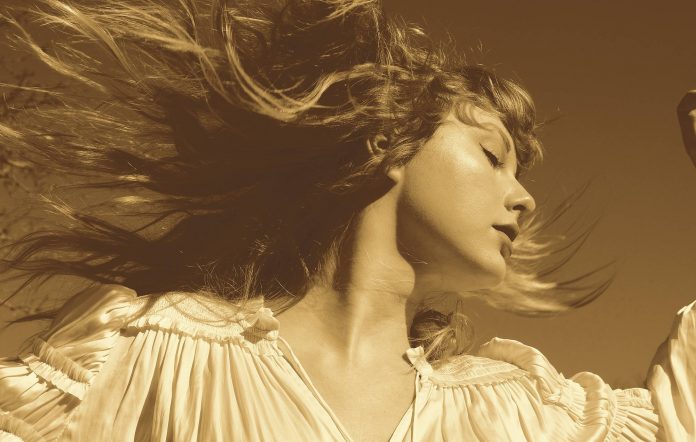 Is it 2008 again? Taylor Swift has unveiled the new version of her smash hit, “Love Story,” ahead of the release of the re-recorded “Fearless” album, 13 years after the original was released.

Fans already got a glimpse into the songs when a Match.com commercial (directed by friend Ryan Reynolds) featured a snippet of the song in its ad. Now, fans have the whole version to dance around to.

“Love Story (Taylor’s Version)” is a re-record of her 2008 song, with grown-up vocals and new passion, knowing she owns this version. The video is an adorable compilation of Taylor meeting fans during the Fearless era and never before seen footage. It’s like hearing again for the first time.

In true Taylor fashion, along with the announcement, she put in a hidden message on her Instagram post. Fans discovered it read APRILNINTH, which many fans believe is the release date for “Fearless (Taylor’s Version) “.

The album will include 26 songs, including six that were never recorded or heard before, along with the others that fans have grown to know and love, such as “You Belong With Me,” “White Horse,” “Forever and Always,” and more.

Swift has been in a constant battle with her old record label trying to buy back her masters since Summer 2019. Big Machine Records and Scooter Braun own her first six albums (Debut through reputation). That means he earns a profit anytime her music is used or streamed, not Taylor, who wrote and recorded her own music. So Taylor decided to take back the narrative and re-record her old work. However, due to the rule that music cannot be rerecorded until 5 years after its release, she has to wait to rerelease ‘reputation.’

“Love Story” became a popular sound on TikTok this year, so it is great that Taylor is introducing people who have never heard the full song to it while holding all the rights to it.

“Fearless” is the most awarded country album of all time and we can only imagine this upcoming will be just the same.

Swift has not only rerecorded her entire Sophomore album, but released two brand new albums in quarantine, “folklore” and “evermore.” She IS the music industry.

Make sure to pre-order the new album, check out new merch, and download “Love Story (Taylor’s Version)” on her website.

Did you flip out just as much as we did? Let us know your thoughts on Twitter at @CelebMix.