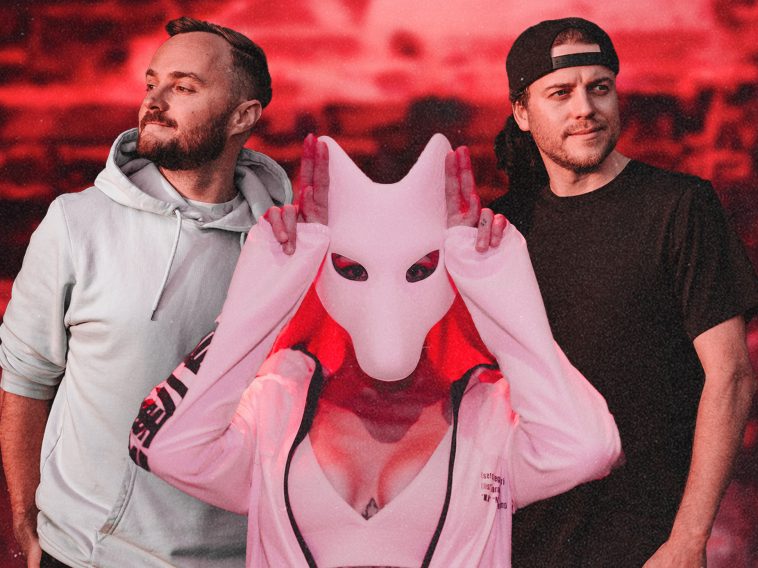 Electro-funk duo The Funk Hunters teams up with LUN for their sinister dance collaboration titled “La Puta Ama.” From its eerie opening notes, the track gives off a powerful underground energy that give listeners a cue to “La Puta Ama’s” namesake – “the f*cking boss bitch.” The ominous vibe is paired with reverberating melodies and slowly builds into a dark, driving bassline complete with garage-inspired and serrating synths, altogether creating a unique ambiance both dancefloor friendly and intimidating. Watch your back because “La Puta Ama” is a lot of fun but will also bite back. The release is the first collaboration between the artists, out now on Westwood Recordings. Read on for more from the artists on the track’s inspiration:

“LUN is a serious boss, and that’s exactly what ‘La Puta Ama’ is all about! Big boss energy. It’s dark, it’s banging, it’s unique, it’s everything we hoped for in a collab with L?N. We’ve been such fans of everything she’s been releasing, so it really feels like this one was meant to be. It feels good to get the chance to collaborate” – The Funk Hunters

“‘La Puta Ama’ means “the f*cking boss bitch” which is how I like to wake up feeling daily. I started a wip that felt like exactly that – scary and fun, and hard all at the same time. I sent that over to The Funk Hunters, who loved it, and they added a whole lotta bite to it. This one came together really easily. Always excited to combine brains with talented people” – LUN

As longtime friends, collaborators, and multi-dimensional artists – The Funk Hunters, Nick Middleton’s and Duncan Smith’s chemistry is perfectly aligned. Middleton steers the band’s studio efforts, having produced, co-written, and mixed their debut album, “TYPECAST.” And Smith anchors the project’s live show with an indefatigable charisma that complements Middleton’s thoughtful production. Together they combine their powers as DJs, resulting in a brilliant technical display of creative collaboration between 4 turntables. Their vision has resonated with both listeners and industry tastemakers alike, with their music amassing over 30M track streams across their catalog of original productions, remixes and collaborations. Winners of the Electronic/Dance Artist of the Year at the Western Canadian Music Awards, The Funk Hunters also reached #1 on the Billboard Dance Club Chart last year, with an official remix of U2’s “Love Is Bigger.” Their catalog also includes other official remixes for Big Gigantic, Gramatik, Selena Gomez, and Imagine Dragons. In addition to studio work, The Funk Hunters enjoy a vibrant global touring career with major festival plays at Coachella, Life Is Beautiful, Lightning in a Bottle, Electric Forest, Osheaga, Outside Lands, Burning Man, and Shambhala.

LUN, the new creative project from alt-pop icon Lights, arrived in 2021 with debut EP – “haha i like it.” The six-track, bass-heavy collection was heralded by singles “bitches” and “y2k2k.” Billboard praised “bitches” for its “hefty siren call chorus that makes us feel like we can shoot lightning through our fingertips,” while EDM.com commended “y2k2k” for “transitioning seamlessly from a space of control into one of beautiful mania.” Following the EP release, L?N shared “demolition, feat. Lights (Ruined by Glass Petals),” a club-ready remix by Glass Petals – the brainchild of Felix Cartal and Johnny Jover. In May, she returned with the “fuck ya go us” EP, a five-track offering that captures the essence also shown here on “La Puta Ama.”