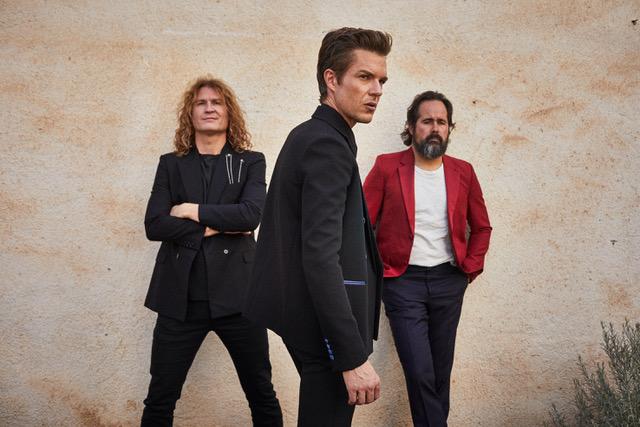 The Killers announced today that they will be releasing their seventh studio album, Pressure Machine, on August 13, 2021, AND that they are going on tour in 2022!

The album was co-produced by the band, Shawn Everett, and Jonathan Rado (of Foxygen), all everyone who worked together on their album, Imploding The Mirage, released in 2020.

When Imploding the Mirage was released, the COVID-19 pandemic was going on around the world.

“Everything came to this grinding halt,” says the band’s frontman, Brandon Flowers. “It was the first time in a long time for me that I was faced with silence.  And out of that silence this record began to bloom, full of songs that would have otherwise been too quiet and drowned out by the noise of typical Killers records.”

Unlike their past music, The Killers’ new album is a character-study-driven album and based on the memories and stories of people that impacted Brandon growing up. Pressure Machine lives squarely in Brandon’s hometown of Nephi, Utah, a close-knit community of 5300 people with no traffic lights, a rubber plant, wheat fields, and the West Hills.

The album art for Pressure Machine’s was even shot on the highway just outside Nephi, taken as photographer Wes Johnson passed a roadside inspirational display set up by a local Baptist church. Wes took dozens of images of Brandon’s hometown throughout the early part of 2021, and many of them are featured in the album’s packaging for the band’s physical album.

Check out the album cover for Pressure Machine below:

Concurs Brandon, “I discovered this grief that I hadn’t dealt with. Many memories of my time in Nephi are tender.  But the ones tied to fear or great sadness were emotionally charged.  I’ve got more understanding now than when we started the band, and hopefully I was able to do justice to these stories and these lives in this little town that I grew up in.”

With all of the meaning and emotion behind this album, this just might be the most elegant album that The Killers have made so far.

You can pre-order Pressure Machine HERE.

The Killers will be going on tour to celebrate both Pressure Machine and Imploding The Mirage, along with some fan favorites in 2022.  Tickets for these shows go on sale on Friday, July 23rd, at 10 am local time via the band’s website.

Watch the album trailer below:

Connect with The Killers:

Will you be getting The Killers’ new album or seeing them on tour?