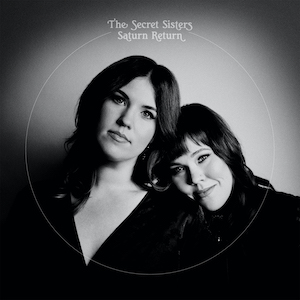 Grammy-nominated US country music duo The Secret Sisters have announced that their brand new album ‘Saturn Return’ will be released on Friday, February 28th – they have also confirmed a string of UK tour dates in support of the forthcoming record throughout January and June.

With the launch date of the LP just weeks away, the pair have shared the third single to be officially lifted off the tracklist – ‘Hand Over My Heart’ which showcases another side to the CD and gives fans a real glimpse as to the incredible breadth of sonic sounds they can expect from ‘Saturn Return’ next month.

The new project has been produced by Brandi Carlile and her frequent collaborators Tim Hanseroth and Phil Hanseroth – the whole album was recorded in Washington state at Carlile’s home studio and included ten songs written by Laura and Lydia Rogers.

‘Saturn Return’ also features the real-life sisters singing individually for the very first time instead of relying solely on their trademark soaring harmonies—something Brandi challenged them to do.

Speaking about her decision to ask the sisters to sing separately, Brandi Carlile says: “It’s really uniquely unified and harmonious when they’re in tandem and very tumultuous and deep when they’re not in tandem and I think for a brief, beautiful moment on this album we caught The Secret Sisters not in tandem for the first time. To be a harbinger for their honesty in these songs and to watch them work together to see the tension was one of the greatest gifts of my career because those are two very powerful people in a very interesting point in their lives.”

You can catch The Secret Sisters live across the UK this year:

Ticket info and full pre-order details of the new LP can be found at secretsistersband.com

Are you excited for the release of ‘Saturn Return’ next month? Let us know your thoughts across social media!