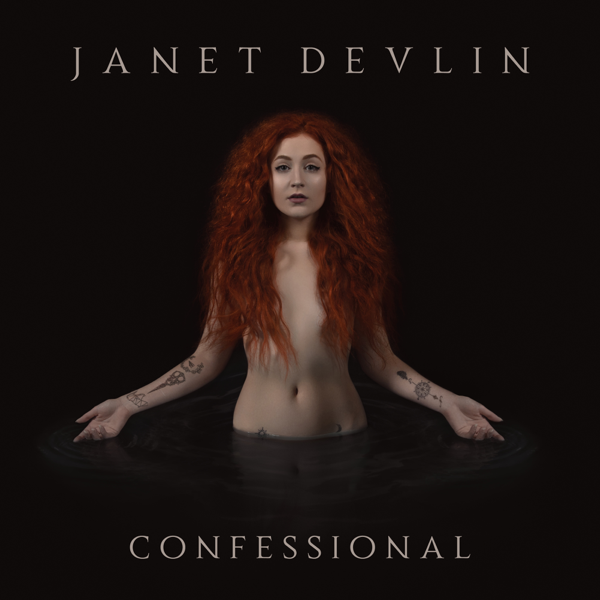 It’s been six years since her debut album release, Janet Devlin has gone totally personal, delving deep into her feelings and emotions for this album, Confessional. Music that comes from such a place not only deserves to be heard but also shows off artistry. Janet Devlin’s second studio album, Confessional, is an art masterpiece.

Janet Devlin is a singer-songwriter from Gortin, Northern Ireland, who is best known for being a contestant on the eighth series of The X Factor, where she placed fifth overall. She went on to release her debut album, headline a number of tours, and release four EPs. She even charted with her album, Running With Scissors. Now, she’s back, stronger than ever, laying all the demons from her past, out into the world to see, hear, and read about – as, alongside the release of this album, she has also dropped an autobiography, titled My Confessional.

Since we adore her Confessional album, we have decided that each track deserves its chance to shine, and so read-on for our track-by-track album review.

Introducing the whole album is the title track, “Confessional”, which starts off with a rhythmic chanting that has hints of indie and folk, preparing the listener for the song and the album in its entirety. Janet Devlin jumps in with interesting vocals, proving that she’s a talent we’ve all been missing out on. She has so much control with her voice and easily captures the listener with this track. This is one incredible opening song, preparing us for some deep, dark, and twisted tracks that Janet Devlin has unleashed from within. This song explains what this whole album is about, she’s ready to tell her story, but are you ready to hear it?

A piano chord opens this track and the piano notes continue throughout the song as Janet Devlin builds and builds with her voice and her words. “So Cold” is about missing someone or something, which hurts being without them. It also takes the words of others, who say that she’s too young to have been through so much – which usually comes from people who haven’t got a clue what she’s been through, to which we direct them to her autobiography where she puts into words all her thoughts, feelings, experiences, and emotions and how that has impacted her mental health. This song, along with the book, really makes the statement that you should never judge someone on how young they are; many young people around the world have gone through many unthinkable things. Janet Devlin’s vocals are pure magic, allowing the listener to hear every emotion she felt when writing and recording this song.

Saint Of The Sinners

Adding more folk wrapped up in a pop track, Janet Devlin continues to impress with “Saint Of The Sinners”. The lyrics are full of metaphors as we hear her sing from a dark place within her as if she’s calling out her inner demons whilst also hitting back at them. It’s one interesting song, and she’s in control of her vocals throughout, making an impact with the words she’s singing.

Starting off tuneful, “Cinema Screen” is quite the jovial track even though the lyrics paint a different narrative as we hear about how Janet Devlin keeps playing the same mistakes she’s made, over and over in her mind. She knows she needs to move on, wants to move on and forget all that has happened, but she’s finding it difficult to do so. It’s a clever song, and somewhat misleading with the beautiful backing track, yet it works well because of the way that Janet Devlin has sung it.

Slowing down the album with this track, “Speak” truly allows Janet Devlin’s vocals to shine in every single way. Soft and spoken sweetly, Janet Devlin sings about keeping a little secret that she’s not ready to speak about but as the song progresses she realises that she is ready and that she won’t keep it. It’s hinting at so much, metaphorically, especially since everything she has been through has pretty much been kept a secret from the world and now she’s released her autobiography about it all, every single dark corner. It’s a sweet and open track, in the middle of the album, that is singularly unique and so stands out effortlessly.

Another deep dark ballad that works brilliantly after “Speak”. This one is about people who betrayed her, and piled the demons on top of her. She touches upon where this song comes from in her autobiography as she trusted someone as she pursued her music career but it ended with her losing the money she had. The music industry is difficult in every aspect and it’s not a surprise that stories like this one come up time and time again. Janet Devlin has poured all her heart and soul from that awful moment into this brilliant song and it’s come out exceptional. The repeated lines at the end, makes this song, adding more and more fuel to the fire.

In her autobiography, My Confessional, Janet Devlin reveals that she’s never truly been in love with someone, and this is probably where those feelings came from for this song, “Love Song”. The lyrics are interesting and relatable to so many people around the world who haven’t truly loved someone either, as she sings about love songs themselves and where they come from and how love appears. It’s a clever track and has a more upbeat tempo to it compared to her previous tracks. Her voice is filled with admiration of those people who have felt true love, and a wish to feel that at some point. We have to admit, that this is our favourite song on the album, one you totally need to hear.

Changing the mood of the album, “Big Wide World” is a positive, euphoric, and energetic track that is sure to bring a smile to your face. It’s honestly so great to hear this sort of track from Janet Devlin, especially after all the emotions she has flooded into the previous tracks we’ve heard. Creating imagery with the lyrics of looking across a cityscape, this track is a reminder to forget your troubles, those demons, and just be free in the big wide world. Take that moment and truly let it shine.

Away With The Fairies

Keeping that positive energy, Janet Devlin runs “Away With The Fairies” on this track. It can be seen as both self-destructive but also positive, she’s crying out for help during some of the lyrics, whilst also full of independence energy ready to tackle the battles ahead. It’s a clever track that is full of so much imagery, and Janet Devlin’s voice sprinkles magic into the words with every beat.

What sounds like a flute opens up this number, and we’re so ready for another tuneful track. “Sweet Sacred Friend” is a very catchy track that divulges into a relationship that was too much for her – which could be a whole metaphor in itself to one of her dark demons from the past. She’s said farewell to this so-called friend and this song enforces that even more so. It’s one track we could listen to on repeat because it’s such a strong song and one that will easily get itself stuck in our heads.

Going back to a more indie-folk tune, “Holy Water” is a look-back anthem to the songs on this album. It’s a cleanser track that states that by opening up to the world about all her demons and sharing what she’s been through, it has helped to wash them away, and although they’ll always be there and she can never run away from them, we can all help her by listening to this album, reading her book, and understanding what she’s been going through – not just us, but her family and her friends too.

The final track on this album, “Better Now” is a piano ballad that wraps everything up. Full of emotion and honesty, Janet Devlin sings about unleashing everything she’s been through and professing that she’s better now because of it but at the same time aware that that won’t always be the case. It’s an interesting track to end the album on and sure makes us want to listen to the whole album again to divulge into her thoughts, feelings, and emotions all over again.

Overall, Janet Devlin’s sophomore album Confessional is a story of two halves; the first half is filled with her troubles, her demons, and her mental state, whereas the second half is flooded with positivity and energy. From where she’s come from to where she is now, shows how much of an internal fight she has battled, and will continue to battle. This is a full-on confessional and paired with the autobiography that she’s released, My Confessional, Janet Devlin has truly made a piece of art that will be embedded in history in time to come. On-point throughout, Janet Devlin stuns us with every track on this album, from the lyrics to her voice. We highly recommend that you journey through Janet Devlin’s Confessional album and her book, My Confessional, and support her in her music endeavours as she continues to turn her dream into a reality.

Confessional is available to download and stream right now, via Insomnia Music Records.

What do you make of Janet Devlin’s new album Confessional? Let us know on Twitter @CelebMix.