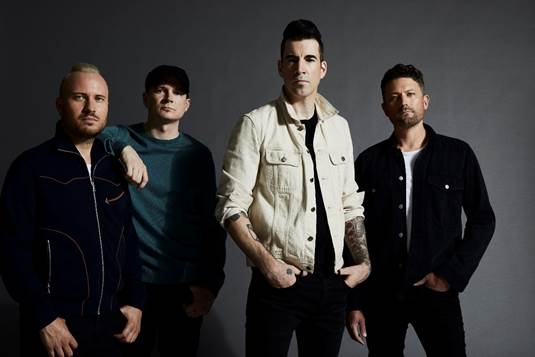 There have been some incredible album releases this week, including the likes of Meghan Trainor and Kesha, but one album that’s been under the radar since its release has been Theory Of A Deadman’s seventh studio album, Say Nothing.

Theory Of A Deadman are a four-piece Canadian rock-pop band consisting of Tyler Connolly, Dave Brenner, Dean Back, and Joey Dandeneau. They are best known for their hit song, “Hate My Life”, which was released in 2008. Other hits you may have heard of, include “Bad Girlfriend”, “Not Meant To Be”, “Wait For Me”, and “Lowlife”; however, it’s their debut single “Nothing Could Come Between Us” that charted successfully in their home country, peaking at number two on the Canadian Singles Chart, which they also followed up successfully with “Make Up Your Mind”. On the other hand, their 2017 single “Rx (Medicate)” is their most-streamed Spotify song to-date, just closing in on 100 million streams. All six previous albums have been successful in various countries, proving that they are ones to watch and this album not only proves their longevity whilst still staying true to themselves, creatively, but also proves how much they care for their music, fans, and the world as a whole. Recently, they dropped the “Of A Deadman” from their name on all artwork and on their YouTube videos, but they still release and promote under the full name of Theory Of A Deadman, this is due to a number of reasons, with the band stating that they struggled in discussing the band with people who were unfamiliar with who they are; fans have also noted the soft-rock path they’ve recently chosen as another reason for using an abbreviation of the name.

Having listened to this album throughout the week, we just had to write up a track by track review as each song is incredible in its own right. The album, in its entirety, has been produced by Swedish music producer Martin Terefe. It also spawned the singles “History Of Violence” and “World Keeps Spinning”, with both having incredible and powerful accompanying music videos.

Black Hole In Your Heart

Opening the album with “Black Hole In Your Heart” allows Theory Of A Deadman to set the tone of this new album, they’ve gone down a new direction, taking inspiration from their roots but giving this indie-rock vibe too and it’s just addicting in every way. The song is rhythmically strong with Tyler Connolly easily showcasing his voice and giving the words meaning and depth. The lyrics are intricate bringing these brilliant rhymes that roll off Tyler Connolly’s tongue perfectly, as we hear him singing to someone who is full of darkness and unable to love but he just can’t help being in love with this person.

Now, this track we simply adored from the minute we heard it. “History Of Violence” also has an awesome music video that accompanies the track. The lyrics paint a truly unforgettable narrative about a woman who is being domestically abused to the extent where she uses a gun to shoot her abuser. It’s such a sad song and the band treats the story with so much honour, grace, and respect, utilising their platform to get the message out – and that’s exactly what this whole album is about, bringing to the surface some incredibly relatable stories that many songs rarely delve into. If there’s one song you need to hear on this album, it’s this one.

Starting the song off that could relate to bullying, it instead leads into being broke with no money, adding in personal stories and very real lyrics that can speak to a whole range of people. Theory Of A Deadman has never shied away from such topics and it’s refreshing to see them bring to life the stories many of their fans are likely to be going through whilst giving us awesome lyrics that just meld brilliantly together. This track doesn’t have a lot going for it, but the lyrics alone make it – it really doesn’t need a lot else.

The title track and gosh is it powerful. Theory Of A Deadman delves into a broken relationship, with the lyrics coming from the perspective of someone who is in a dark place, alone, regretting the end of the relationship but not understanding why he said nothing, and just let it happen, regretting not fighting for the relationship and not liking where he is now. It’s another relatable track from these guys, and you can literally imagine how this person is feeling.

Technically released as the second single, but pretty much became an instant grat single, “Strangers” is completely catchy focusing more on politics than anything else and how it has changed the world and its people. The message behind the track makes every single listener look inside themselves and really feel these lyrics and understand where this band is coming from. We need more people putting good out into the world. The spirit of this message is wrapped in a rhythmic beat that you won’t quite get out of your head, and Tyler Connolly impresses throughout with his vocals and gives us a talking almost-rap-like bridge near the end of the song that just helps to bring the song to life and plunge the words into our souls – we’re getting NF vibes from Theory Of A Deadman in this album, mainly because of the very real lyrics and the awesome delivery of them.

Returning to their roots, somewhat, “Ted Bundy” feels like it should’ve been on their earlier albums, perhaps their self-titled album Theory Of A Deadman or their second studio album Gasoline, yet it works perfectly in the middle of this album. There’s a heavier sound to this track, with the band exploring a stronger avenue for the song, overpowering the lyrics somewhat. Less intricate, the song delves into a story about a guy who isn’t happy and isn’t able to love or appreciate the beautiful woman in his life, with the verses portraying a love story whilst the choruses crash and end the relationship. It feels like a lot of mithering and overthinking is going on with the protagonist and the band portrays this well with the beat and the sound, but at times the lyrics feel like it’s missing a few words here and there. Regardless, the song sounds experimental and very indie-rock, and it still works.

Time for one of our favourite tracks of the album, “World Keeps Spinning”. The music video alone touched our hearts as we watched a guy who is going through depression and he’s not happy with his life and the world, and yet he decides to keep going. His teacher is feeling the exact same way, and the teen’s essay encourages him to keep going. The video was released on the day that the album dropped giving us twice the magic of this song.

The video accompanies the track brilliantly with the lyrics completely delving into the headspace of this character, completely bringing him to life with every word. We’re glad this song was chosen as an official single and that a music video was also dropped because it just speaks to us and it’s full of passion and heartfelt lyrics, that it’s purely undeniable how strong of a song this is. We’re with this character every step of the way and sometimes, that’s all some people need, they need to know that someone is there for them, whether that is in person or in spirit. The world is full of people going through tough times, no matter how big or small, and mental health is still rarely spoken about, yet Theory Of A Deadman are here bringing it all to the light. More people need to hear this single, watch this music video, and actually truly listen to this whole album.

Another awesome story-telling song, this time Theory Of A Deadman delves into the story of a girl brought up in the foster care system as she has no parents and her life there on as she falls into a dark place with love, drugs, and the police. We don’t know what spurred this Canadian band to create songs about these stories but we have to admit it’s some of their best work to-date.

This is one of those tracks that will certainly hit some people in the heart. The song kickstarts with a news broadcast describing the events of the Charlottesville car attack in Virginia, USA. Tyler Connolly jumps in with the chorus as a steady beat can be heard behind. It’s clear that this track is about terrorism and how it affects us all in one way or another, and how people view the world differently to another. The first verse starts off with words for the attacker, but the lyrics then expand to the victims and the rest of the world, telling us to not be afraid to live our lives. This is probably one of their most important tracks due to the subject itself, but the track comes off as blasé but in a good way, as we all need to go out and enjoy life, live it to the fullest, and not hide in fear.

Bringing personal realness into the last song, “It’s All Good” feels like a laid-back response to how they’re feeling as a band. The verses launch into a relationship built on drinking, clubbing, and bar fights, which has its ups and downs but leads to everything being good and okay. It’s a nice chorus to end this album on as it inspires people to keep going, no matter whether your story relates to any of the songs above, or you have a totally different personal battle going on. Theory Of A Deadman are telling you, that you are not alone and that we’re all going through stuff.

There are just ten tracks on this album, which really isn’t enough considering the emotional path Theory Of A Deadman has taken with these songs, breaking down the walls and barriers that has been built up around them, around their fans, and around people in general. We are certainly getting NF vibes in places due to the subject matters they’ve approached, and we just know that if a collaboration were to ever happen, this would be the perfect time to do so (we can dream).

Say Nothing was released last Friday and is available to download and stream. We hope more music videos are on the way – in fact, with these narrative songs, we’d absolutely love if each track received an accompanying, relatable music video. There’s so much opportunity with these songs.

What do you make of Theory Of A Deadman’s new album Say Nothing? Let us know on Twitter @CelebMix.