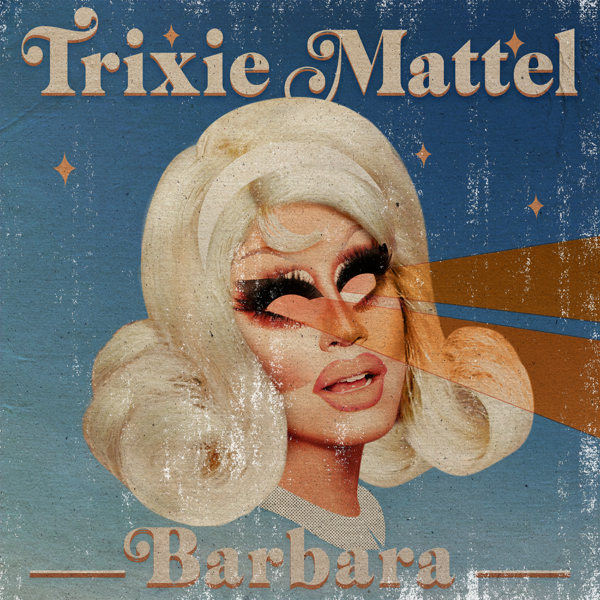 Last Friday saw RuPaul’s Drag Race All Stars 3 winner, Trixie Mattel, drop her third studio album titled Barbara, and we have to admit, this has got to be her best album release to date! The album follows up her soundtrack album to her documentary film Trixie Mattel: Moving Parts which was released at the end of last year.

Many of the queens from RuPaul’s Drag Race go on to release music, but it seems Trixie Mattel is the most successful with her releases out of all the queens that have released singles and albums, and it’s not a surprise as she does have a brilliant voice and her songs are amazing to listen to.

We’re excited to delve into these catchy songs. The song “Malibu” was released as the first single from the album and a lyric video was also dropped for it. We hope some music videos for the tracks on this album are on their way as each track on this album is class, and deserves a visual! The collection of tracks are split into two discs, with each containing four tracks, suggesting two pieces of work under one album – it’s like getting two EPs in one shot… We bet that Trixie Mattel is starting a new trend this year with this concept.

Summer has arrived, or more like a wishful summer has arrived as it’s wintry cold here right now and Trixie Mattel is singing about going to Malibu with the one she loves and walking along the beach – oh how we need this right now, but totally during summer! It’s a sweet cute track, that really allows Trixie Mattel to shine in every way, and it’s making us jealous as we need a bit of summer sun right now. Vocals are on-point in every way, it’s literally the best we’ve ever heard from this drag queen and she’s really coming into her own with these songs and we love watching her success grow, and we love listening to this song! “Malibu” is one of those songs that get stuck in your head and because it’s so adorable you just have to keep listening to it.

We Got The Look

Opening with a chant-like rhythm, “We Got The Look” quickly changes the pace and the feel of the album after the endearing “Malibu”. A guitar and drums jump straight in making this quite the opposite of the previous track. Trixie Mattel sings about being glammed up and hitting the streets. It’s a stylish track with a pop-rock edge to it. It’s impossible to say that Trixie Mattel isn’t versatile, going from the pleasing summer track “Malibu”, to this stylish pop-rock track, she certainly has the voice as well as the look.

Keeping with the pop-rock, “Girl Next Door” has a guitar played throughout as Trixie Mattel sings about being the girl next door who is into the guy next door, and she wants him to know that if he’s ever bored he can always come around. It’s a cute and mildly-saucy track that has us imagining a similar music video to Carly Rae Jepsen’s “Call Me Maybe”.

Stripping it right back for this track, the intro starts off with just Trixie Mattel and a guitar, and drums later kick in. It feels very acoustic and intimate which really works considering the story behind the song. She spoke to Billboard about this song claiming it was originally about her boyfriend’s obsession with a porn actor and then she recently watched Zombieland 2 and became obsessed with Jesse Eisenberg, and so she changed the song to be about him and thought it’ll be funny to want to be Jessie’s girl, since she’s a drag queen, and so this song was created. The lyrics are explicit unless you’re really innocent and then they’re just words. The song is stripped back throughout and we’re not entirely sure how we’ve gone from “Malibu” to this but it sure is interesting and we can’t wait to see what journeys the second part of the album takes us.

Now, this is the Trixie Mattel we know and love from previous albums, “Gold” allows her to tune into her country goodness. The song is about a heart that’s breaking as a strong relationship deteriorates after many years. It’s a sad song that touches on a love that once was but then caved in. The backing track differs from the lyrics, giving the track a slight up-tempo feeling to it, so much so that it’s suggestive that things will heal and that a broken heart isn’t for forever and that it will mend.

I Don’t Have A Broken Heart

Keeping with the country feeling and conflicting the previous track is “I Don’t Have A Broken Heart”. The lyrics paint a journey of healing, almost as if the chorus – which is mainly just the title of the track – is Trixie Mattel’s self-denial as the verses crash subtly, slowly, but without care. It’s almost like mixed thoughts, the way her mind is running in that one quick moment, all bunched together poetically and beautifully. It may not be easy to understand the lyrics of this song, but we have to admit that it’s simply aesthetically pleasing and will surely help mend a few broken hearts out there.

It’s clear this second half of the album consists of country tracks clearly showing her home-roots haven’t gone away. “I Do Like You” is a country ballad at it’s finest and Trixie Mattel brings the complete story to life with her honesty and passionate vocals – it’s clear she means every single word of these lyrics! There is so much honesty within these words as she sings about a difficult relationship that includes arguments and distance, and everything that isn’t working for them, whilst the choruses are about how her heart feels and that regardless of everything that’s going on, she still likes him. It’s brutal honesty at its finest, and the bridge suggests hope at the end of it all as they rebuild their relationship.

“Stranger” ends this album and it is a cover of Lavender Country’s song “I Can’t Shake The Stranger Out Of You”, only she’s added an extra verse to the song which fleshes out the story even more so. She’s totally given the track a modern-day twist, and it is refreshing to hear, especially since the lyrics are still a good reflection on one night stands, but Trixie Mattel’s extra verse also suggests there’s something hidden and deep going on in the character of the story and that they’ll need a friend – and not a stranger – when all is said and done. What a way to end the album and her vocals sound so strong on this very last track.

This album is such a beautiful collection of tracks, and we can totally see why Trixie Mattel split the songs into two discs, as they are like two different EPs coming together under one album. Her voice is the best we’ve ever heard it. We could listen to this album on repeat for days on end.

Barbara is available to download and stream right now via PEG Records. We so hope that a few of these tracks get accompanying music videos released, as the songs are full of narration and we can just imagine the sort of videos Trixie Mattel would drop.

What do you make of Trixie Mattel’s new album Barbara? Let us know on Twitter @CelebMix.