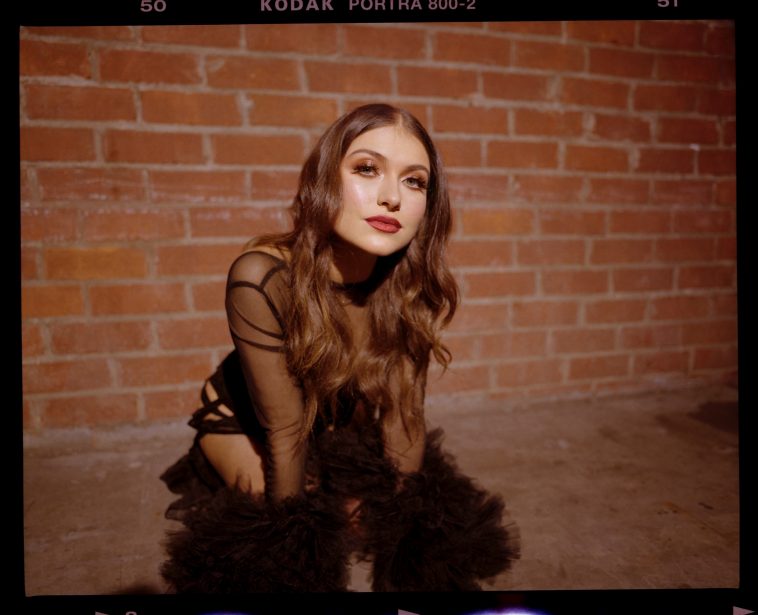 Last week saw Elle Winter drop a stunning collection of tracks under an EP titled Yeah, No. which is one of our favourites releases of this year. Elle Winter continued to give to her fans by also dropping an awesome music video for the title track. The release of this EP follows up her single “Thought Of Me“.

Elle Winter is a 20-year-old rising singer, songwriter, and actress who is certainly an exciting talent. She’s been working with production duo The Orphanage, recently, on her new tracks and this team-up is proving to be brilliant for Elle Winter. She was born and raised in New York City and was later discovered by Radio Disney which saw her take part in “Next Big Thing” where she released a bunch of singles and she also went on a national tour to build her fanbase. She soon dipped into some acting roles, appearing in The After Party and Three Generations. Now, she’s focusing on her music after being signed, last year, to Sony’s RED MUSIC, and she’s now just dropped her debut EP – which we managed to talk to her about in our exclusive interview.

This EP has spawned the singles “Sick Of You”, “Do You”, “Cave In“, and “Thought Of Me“, as well as the music video for “Yeah, No.” which is the title track. Talking about the title track, Elle Winter said: “I wrote the song ‘Yeah, No.’ in Nashville at the end of a long term relationship. My ex kept calling me to check-in and make sure I was ‘OK’. This person could not have really known me if he could think I was home pining over him and missing someone who was not the best person for me.”

She continues, “I call this track my ‘mic drop’ song and the music video will capture this women empowerment vibe. I want the song and video to create a sense of solidarity among women who are able to find strength and confidence in themselves even as they are belittled by others who think they need them to thrive, when, in fact, ‘Yeah, No.’ they don’t.”

That’s the exact vibe that we get from the song and the music video. Elle Winter is confident and strong in this visual, which has been directed by Bobby Hanaford. Her fashion style is on-point, as she sings about a break-up but knowing that person wasn’t right for her. Throughout there’s minor choreography that showcases Elle Winter brilliantly, and she does give us female empowerment and girl power, with her backing dancers. Strength in unity, it’s clear Elle Winter is destined for success.

“I never realized how often I use the term ‘yeah no’ until I wrote the song. It’s like ‘thank you, next’ – a colloquial term we all use but haven’t realized how often we use it,” Elle Winter went on to say. “It is really empowering for women to know they can be on their own and be okay. For all the ex-boyfriends out there who think this love is still yours – yeah, it’s not.

“I want people to know that they’re not alone in whatever they’re experiencing,” she adds as she discusses what she hopes to achieve with her debut EP. “If they can relate and feel a sense of community – I’m with them. We can enjoy it together.”

The EP contains a total of six awesome songs that are individually outstanding but collected as a mini-album… they shine brighter than ever before. Elle Winter is a name you need to know now before everyone discovers how amazing she really is. Since we love every song, we’ve decided to write up a track-by-track review of the EP.

The title track starts the EP off and it is such an empowering track that really makes an impact to the listening experience. It starts off subtle and engaging before unleashing Elle Winter’s amazing vocal talent. The bridge builds and builds before crescendoing into a hard-hitting but addicting chorus filled with emotion and fire. The lyrics paint a narrative of being a strong independent woman after the break-up of a relationship. Full of empowerment and depth, “Yeah, No.” really lets all listeners know that life is going to be more than okay after a break-up – something many people need to hear, and Elle Winter easily sends out confidence and positive energy to her listeners, right when they need it the most. A perfect track to start this EP off with.

Continuing with the upbeat numbers, “Do You” is just as addicting as “Yeah, No.” with Elle Winter giving a more relaxed vibe. The track has an easy but catchy hook to it which will certainly embed itself into your head, and a chorus that you’ll be singing for the rest of the day. The song focuses on going down your own path and not influencing or attacking someone else’s, but also adds the concept of being in a relationship where the other person is bringing you down and can be considered controlling. Another brilliant track from Elle Winter right here.

Adding a tropical flavour to the mix, track number three is easily our favourite out of all the tracks. “Cave In” is such a special, emotional, and powerful track, that it deserves so much more recognition. It’s a bit on the raw side but that’s what makes it perfect, it’s not overproduced, it’s not over the top, it’s just one perfect song. In our review of the single, we mentioned that: “The lyrics hit on toxic relationships and how the end of the relationship was actually the best thing for both of them and luckily they didn’t give each other a second chance.”

After all these songs about heartbreak, Elle Winter adds a song about falling in love and making that deep bonafide connection. “Sick Of You” has some R&B vibes running throughout, and shows off her versatility. It’s sensual, with vocal runs for days. Simply wow! This is such a relatable song as we’ve all been here in this very moment, where you just can’t get enough of the person you have fallen for.

“110%” is the only track on the EP that hasn’t been officially released as a single. It opens up with guitar notes that instantly lets you know that this is going to be a brilliant song before Elle Winter jumps in with a falsetto first verse – now that’s what we’re talking about! The song focuses on relationships being hard work and that the people in the relationship need to give 110%, they need to fight for what they’ve got, they need to put in the time and the effort to make it work – this is such a statement song!

This was the perfect track to finish this EP off with, allowing Elle Winter to make a lasting impression that makes you want to listen to the whole EP all over again. “Thought Of Me” takes it down a notch and gives us some relaxed R&B with a bit of soul mixed in. The lyrics are very personal where Elle Winter sings about how the world perceives her in-contrast to who she really is. We all hide our baggage, our problems, our demons, and no one can truly love someone else without taking those on too and seeing past them. The song is suggestive of opening up to others – which we all struggle with.

Overall, Elle Winter sure doesn’t hold back in the songs she has released. She’s used her personal experiences when writing these songs and created an awesome set of tracks that combine for a brilliant EP. Each song gives us chills with her amazing vocals hitting us right in our hearts. This is one EP you need to listen to!

Yeah, No. the EP by Elle Winter is available to download and stream right now. This awesome singer-songwriter literally doesn’t stop, she continues to write and record music and has just spent two weeks in Stockholm, Sweden working on her next project – we cannot wait!

What do you make of Elle Winter’s debut EP, titled Yeah, No.? Let us know on Twitter @CelebMix.