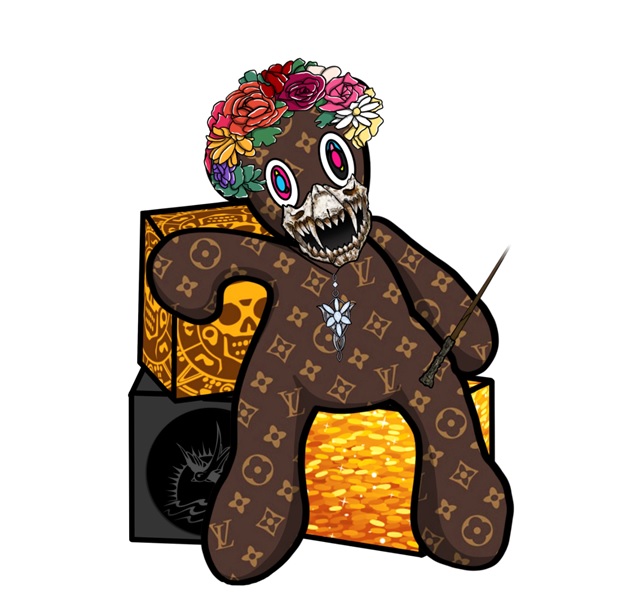 With NFTs rising this year, many artists are eager to join the latest movement, including visual artist Amber Marie. Amber has been utilizing her knowledge in the arts to create a project that showcases her gifts and brings nostalgia to holders. With her NFT, Klepto Bears, it sure is gonna take the world by storm.

Based in Las Vegas, Amber, like many of her peers in the local body art community, was thriving when the global pandemic put her progress to a halt. Eager to branch out into other forms, she found herself in the Graffiti Mansion, where she met Arman Izadi and Danny Lorden, who saw a great artist with the potential to thrive in the graffiti world. The duo took her under their wings, teaching Amber how to empty spray cans as a form of art.

Amber decided to delve into the digital platform with her knowledge of the traditional arts, particularly the NFT industry. Creating the first collection called the Klepto Bear Club, she settled on the bear as a line art representation of a gift her grandmother gave her at five years old. A treasured possession, the teddy bear became a symbol of childhood imagination that tells stories of the bear’s adventures and everything they had been through. Izadi gave his support by donating $100,000 towards the Klepto Bear Loot Boxes to further the project and bring her closer to realizing her dream.

The Klepto Bear continues to uphold Amber’s style, projecting richness in color with fine details like texture and intricate line-work inspired by iconic films, comics, and games that bring the imagination to life and deliver a sense of nostalgia. Painted with peaceful backgrounds apt to guide eyes to the character and shapes, the two-dimensional Klept Bears harken to the nostalgic child within each of us, representing modern-day life layered on treasures of our past.

“Klepto Bears are the face you see in a crowd,” Amber described, “A cause for pause to pause to say, “I’m sure I’ve seen you somewhere before?” How many toy boxes, how many teddy bears litter the story of each of us? How many treasures, how many relics, once loved have gone into the ether?”

While the NFT is engineered to bring nostalgia, Amber and Klepto Bears are also giving away $100,000 in prizes to Klepto Bear owners from its collection in the vault NFT. However, the vault will only be opened upon hitting milestones. The prizes include items like iPhone 13 for Mint #1,000, iPadPro for Mint #2,000, LG TV for Mint #3,000, PlayStation 5 for Mint #4,000, Xbox X for Mint #5,000, Macbook Pro for Mint #6,000, Versace Robe for Mint #7,000, LV Backpack for Mint #8,000, Rolex for Mint #9,000 and Tesla for Mint #10,000. Additionally, Amber Marie also promises to deliver on some wild dares. Upon reaching milestones in the project, Amber will take a pie to the face, make dinner for the crew, have them decide a temporary tattoo she’ll be getting, eat a Ghost Pepper, have a real-life Klepto Bear on the Vegas Strip hand out QR codes, and paint the streets of the city with Klepto Bear art using the lessons that Izadi and Lorden gave her.